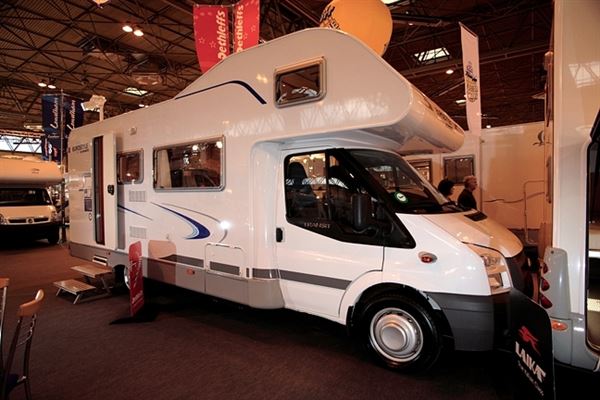 GERMAN 'vans aren't known for their stonking good value, rather their exceptional build-quality, but combine the two and you've got the latest Eurostyle range, available solely from Lowdham Leisureworld.

Built by Dethleffs, the A69 is the largest of this Ford Transit-based clan, measuring nearly seven metres overall. But within its length, it fits in two front dinettes (one single and one double), with two forward-facing seats with three-point seatbelts and two optional lap belts on the rearward-facing bench. It sleeps up to seven though, thanks to its huge overcab, three berths in the lounge area and two rear longitudinal bunk beds.

With so many on board you need loads of storage space and this you've got thanks to the double floor at the rear. A large access door, beside the bunk beds, leads to a narrow but long space that stretches beneath the bathroom from one side of the vehicle to the other. Also, if you want to carry taller items - even bicycles - the bottom bunk bed flips up to create a small garage.

Of course, for just over £33,000 you can't expect plush furnishings and upmarket cabinetwork, but the Eurostyle isn't sparse either - not least because UK buyers get a number of items as standard that their European counterparts have to pay extra for. These include an oven, carpets throughout, upholstered cab seats, a flyscreen on the caravan door and an electric entrance step.

Four swivel spotlights are provided in the dinette area, and coat hooks are positioned beside the door. You'll even find insulation panels on the dinette walls so, when you make up the beds, you're not sleeping against the motorhome's cold walls.

Perhaps the only place that this 'vans shows its price is in the kitchen. The hob (with flush-glass lid) has three burners and the circular sink lacks a drainer. As we've said, the oven is standard equipment, although it was missing from this German-spec show vehicle. Most importantly, there's a big 105-litre Dometic fridge as well as lots of storage in both high and low-level lockers. You'll even find a rubbish bin attached to the cupboard door.

The bathroom offers a separate shower compartment with Perspex doors, as well as a swivel cassette toilet and storage cupboards. This, like the rest of the motorhome, isn't pretty, but it is practical. The Eurostyle offers great value (and lots of space) for families - and let's face it, if you've lots of kids, that's what matters.

Eurostyle A 69
(built by Dethleffs)