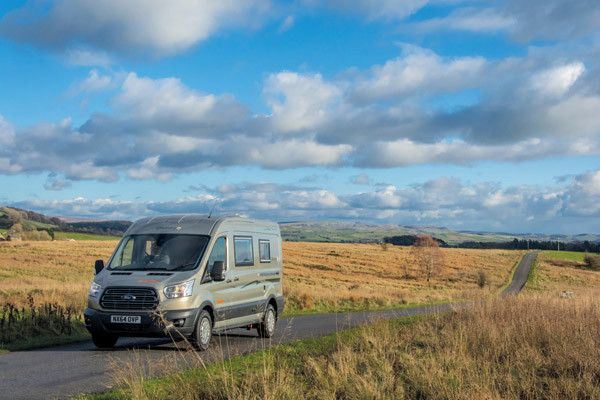 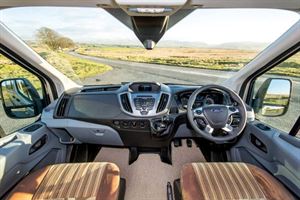 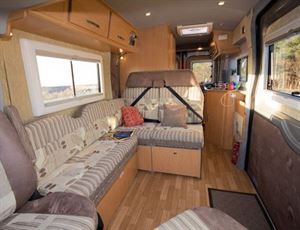 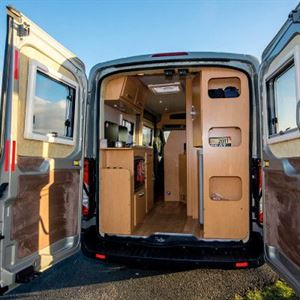 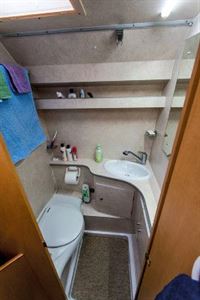 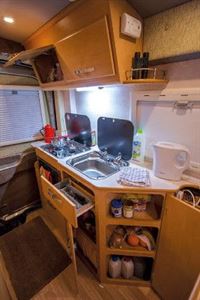 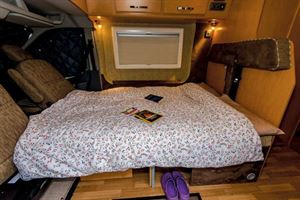 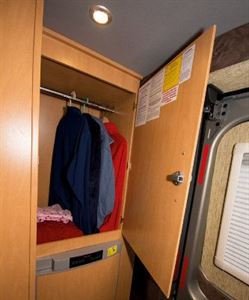 The Ford light commercial vehicle range is rather bewildering. Base vehicles suitable for motorhome conversion start in size with the Transit Connect, then the Transit Custom – this recent newcomer slotting in to compete with Renault’s Trafic and VW’s Transporter. Finally, biggest, and newest, is the Transit itself.

However, this reborn, full-sized Transit can’t be mistaken for any other vehicle – the radiator grille alone guarantees that! You could call it brutal-looking, or like a Star Wars Trooper. But the looks grow on you, the smoothly rounded front and subtly sculpted flanks making the Transit appear less commercial, and smaller than it is – so much so that we had to check the measurements. It really is the same width (with door mirrors folded) as a Fiat Ducato, but doesn’t look it. Likewise, at 5.98m long, it’s only a fraction shorter than its rival (in LWB form), but looks more petite – perhaps down to Devon’s choice of the medium-height panel van, whose proportions are just right.

The instrument panel is clear (crisply blue-lit at night); the dashboard-mounted gearknob (also leather-clad) falls easily to hand; the smooth-operating handbrake has reverted to being centrally mounted and a large audio unit has all the necessary Bluetooth trimmings. There are some oddities – a huge, intrusive, black plastic moulding dominates the centre-top of the windscreen, but where’s its interior mirror? This hadn’t arrived – it’s a Ford option, doubling as a monitor for the reversing camera, which will be standard on the Discovery. The moulding also contains the sensor for the automatic wipers (they work well, as do the automatic headlights).

Some controls (for headlights and heating) weren’t so well placed and smaller folk may find the fixed height of the passenger’s seat too great. But overall, it’s a very good, modern cockpit.

One reason for the popularity of panel van conversions is the desire to have everything in one compact package – a vehicle for holidays and also a car for shopping and family transport. But now we’re talking extra travel seats, which, if you want a comfy lounge, is a challenge in the limited space of a panel van. Some front lounge campervans offer just one rear travel seat, situated by the sliding door. Some ’vans have two forward-facing seats, one either side of a central aisle, but these generally convert only into single (and sometimes not very good) beds. What if you like cuddling up with your beloved, in a cosy double?

Devon has looked afresh at this challenge. Open the (nearside) sliding door, pop your plastic step outside (it’s quite a stretch up and an underslung water tank prevents fitment of an electric step) and hop inside. The décor is very typical of a Devon, with warm beech-effect woodwork and light wood-plank vinyl flooring – and a less practical beige removable carpet in the cab. There’s no Heki over the lounge (one would be useful), but a small push-up skylight over the aisle between kitchen and washroom and another in the washroom. However, there is good lighting (all LED), large lounge windows, and the offside window (adjacent to the travel seats) slides open to provide ventilation for rear passengers.

Both cab seats swivel, but the driver’s is prevented from turning completely by an offside settee which also abuts the forward-facing rear seats. This configuration allows for one rear traveller, on the outer half of the double seat. Behind this, on the offside, comes the washroom, then a wardrobe above the fridge at the rear. Opposite, on the nearside, is a longitudinal kitchen unit.

The smooth, limestone-effect kitchen worktop, with light tan edging, contains a stainless-steel sink and two-burner hob under darkened glass lids. The unit’s forward end is shaped to allow passage by the end of the travel seats, thus reducing work surface, so Devon is considering adding a good-sized, drop-down flap. There’s a combi oven under the hob and plenty of low-level storage (though one cupboard houses the 110Ah leisure battery), plus two overhead lockers. The rear end of the unit has a deep cubby, suitable for those essential wine bottles. Opposite the hob, below the wardrobe, is the 85-litre three-way fridge with removable freezer compartment.