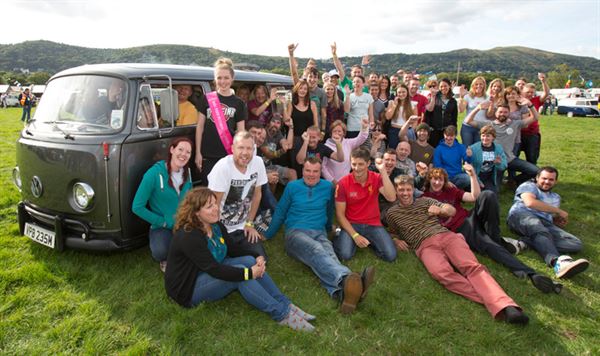 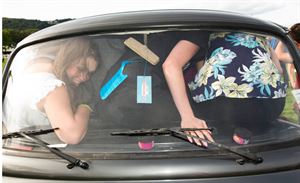 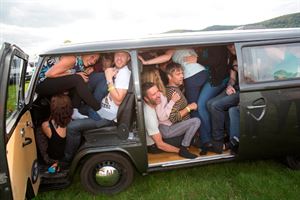 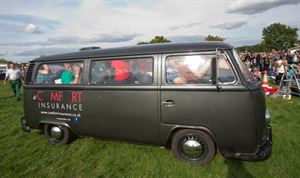 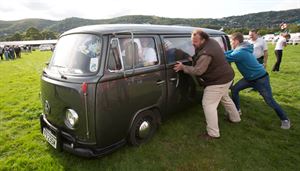 Festival goers at Busfest, held on the weekend of 4-6 September, were invited to take part in a world-record attempt by cramming themselves inside the classic camper. A total of 51 people of all shapes and sizes were encouraged by campervan insurer Comfort Insurance, to create a new Guiness World Record for the most amount of people in a classic VW campervan.

To make the attempt all the people involved have to be over the age of 18 and in excess of five feet tall. The campervan must be an original VW Type 2, produced from 1949 to 1975 and you can’t remove the gear stick or rear view mirror to make life easier. Also, all the doors have to shut.

Parents of all ages rallied together for the fun challenge to help raise money for Make-A-Wish Foundation, a charity that grants magical wishes to children and young people fighting life-threatening conditions such as cancer.

Celebrity TV presenter James Lewis, from BBC’s Flog It and Bargain Hunt was on hand to witness the attempt. James commented, “I’ve been involved in quite a few world records in my time but this has been one of the most exciting yet, especially as it has never been done before and for such a worthy cause.”

Peter Cue, founder and director of Comfort Insurance remarked, “Our customers enjoy having fun with their campervans and we wanted to do the same. What better way than getting everyone involved in trying to set a world record, whilst helping families and children across the UK!”

Calvin, volunteer for the challenge, said after the attempt, "I didn't think we'd do it at first. People's hands and arms were squashed in my face. When it came to the last person, everyone joined in to pull him in. What a great atmosphere!"

Want to get more from your campervan? You need the Campervan magazine, full of reviews, touring ideas, campsites and adventures.