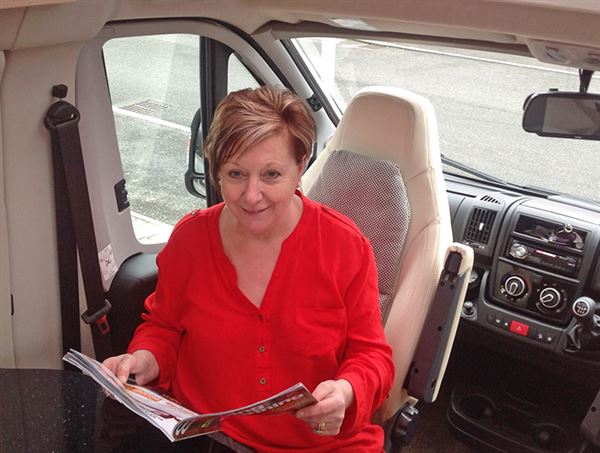 After regular MMM reader, Annette Gration lost her husband Phil, to a rare form of cancer, she decided to visit Searles Leisure Resort near Hunstanton, with two of her close friends, Sue and John Gill. Unfortunately, despite asking for pitches next to each other, for Annette’s motorhome and theirs, and paying full price, the 57-year old widow was refused entry to the campsite thanks to Searles’ no singles policy. Although they had arrived as a group and the receptionists have the power of discretion, they didn’t exercise it and told Mrs Gration that as a single person, she would not be allowed in. It was only when her friends suggested that she say her son would be joining her, that she was then allowed to join them at Searles, but spent the next two days worrying that she would be asked to leave.

Annette explained that, “My husband Phil and I loved our motorhome life, in fact one of the things he enjoyed doing most was being away in our motorhome with a copy of MMM and chilling out. We had had a motorhome since about 2007.”

After Phil passed away, Annette found the prospect of driving their Bürstner Solana too daunting but this is where Camper UK of Lincoln came to the rescue. They allowed Annette to trade it in and helped her decide what to replace it with. She settled on a more manageable Bürstner Travel Van which helped overcome her nerves, having never driven a motorhome before.

After a few trips in the summer, her friends convinced Annette to make a November trip to the Norfolk Broads to cheer her up. They stayed at the Sandringham Camping and Caravanning Club site where they had a pitch together and the warden was extremely sympathetic and helpful. At the end of their stay, rather than go home, they decided to head for Searles Leisure Resort because Annette and Phil had stayed there previously. When calling they asked for a pitch together and were told this was possible if they arrived later in the day.

Here’s what happened next, in Annette’s own words, “It was starting to get quite dull by around 3pm when we arrived and as parking by reception was quite full I sat in my own motorhome whilst Sue's husband, John, went in to check us in.

“Ages passed and I kept thinking what an earth is taking so much time. I was also feeling worried due to how I was parked and anxious to be on a pitch. Eventually John came out and, looking worried, I saw him gesturing to Sue. She then got out and also went into reception.

“I would think by this time at least half an hour to 45 minutes had passed. Eventually Sue came out to me and said I wasn't allowed on to the site, which to be honest I thought they were joking! And when she explained why, I really couldn't believe it. It was because I was now alone and single people were excluded from Searles!

“Sue told me she had said to the receptionist she must have it wrong. I was a 57 year old widow, what did they think that I would do! The receptionist just kept saying 'that was the rules' whilst another one looked on and didn't say anything.”

Unfortunately Annette isn’t the only single lady who has been turned away by Searles, Jean McQueen was forced to spend Christmas at home alone after her booking was cancelled. Jean had read Annette’s comments on Searles’ Facebook page and called to clarify her situation. Despite having already booked, she was also told she wouldn’t be allowed on the site and would have been turned away at the gate if she had gone.

Annette’s son, Mathew, commented, “I am disgusted at the way my mother was treated at this site. At a time when she most needed compassion, the site did the opposite and alienated her. It angers me that the staff there weren't able to use their own discretion to allow her some time of relaxation. In a world where customer service should be of utmost importance, Searles fails at the first hurdle. As a person who enjoys this type of holiday with friends with similar interests, this site will be well and truly off of the list.”

Searles released a statement stating, “When the two motorhomes mentioned in your article arrived at Searles Leisure Resort, our receptionist could find no trace of a prior booking having been made. On learning that one of these motorhomes was to be occupied by a single person, the receptionist behaved perfectly correctly in pointing out the park rules did not permit such a booking.

“We always try to be as accommodating as possible, and are perfectly prepared to exercise discretion with regard to our terms and conditions (including single person bookings), if we feel it appropriate.”

Despite these rules Searles allows local single people to take out a Club Membership and access the entertainment club rooms and bars on their own. Single people can also join the Searles Golf Club to access the nine-hole course. Searles’ website promises that, “The Club’s active social scene will help you meet new people.”

MMM asked Managing Director Paul Searle to comment on this story but he was ‘unavailable’ as Searle’s was in the process of hiring a PR firm to deal with the media backlash it had generated.