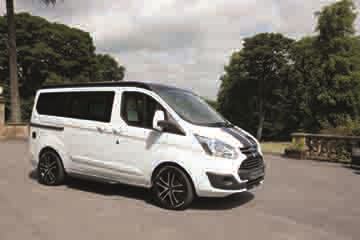 Due to strong demand for its Terrier model – the 2014 Campervan of the Year – and a tie up with Ford to sell the campervan through Ford franchised dealerships, Wellhouse is investing over £125,000 in new equipment and hiring an additional 10 full-time staff to hit a target of building 250 of the campervans each year.

Less than a year after launching the Terrier, which is based on the new Ford Transit Custom, Wellhouse has recruited 16 Ford retailers across the UK, with more Ford dealers expected to join soon.

This creates one of the most comprehensive nationwide networks of agents for any campervan.

Commenting on the expansion, David Elliott, Managing Director of Wellhouse Leisure said: “It has been an amazingly positive year for us. We have broken all our sales forecasts and feel really positive about the next 12 months, which is why we’ve invested in improvements in our factory and already taken on six new people to meet the demand for this great campervan.

“We are also pleased to have had such a strong interest from Ford and its retailers, with 16 who have already placed orders for demonstrators, ranging from small, family-owned companies to some of the largest dealer groups. In addition, we have shown the Terrier to lots of senior Ford management when we were privileged to have the opportunity to show it on the official Ford stand at events such as the Goodwood Festival of Speed, the Commercial Vehicle Show and at the Carfest events in the north and south,” he continued.

With an impressively high spec, the Ford Terrier is a very versatile package that can be used as an everyday car during the week.

You can read our full independent review of the Wellhouse Ford Terrier by clicking here.