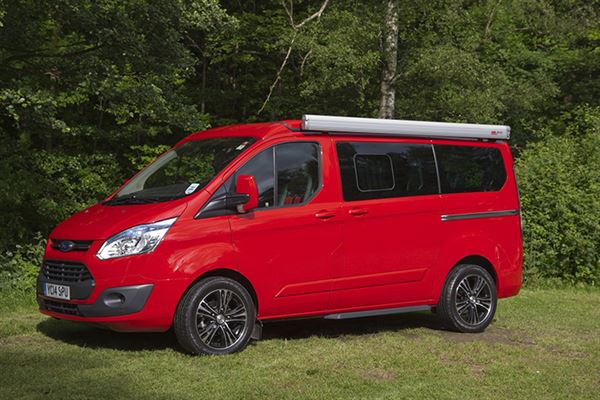 Huddersfield-based Wellhouse Leisure has announced sales of 350 Ford Terrier campervans sold in under two years since the van conversion alternative to the ubiquitous VW Transport was launched. In addition, another five Ford retailers have joined the Wellhouse network of agents, taking the total up to 22 Ford dealers across England, Scotland and Wales where you can view and test a Terrier.

Two of the new Wellhouse Ford agents are in Dunstable and Grimsby, and are part of the Hartwell PLC group which has just placed an order worth over £800,000 for 20 new Terrier campervans. It also sells the Terrier at its Abingdon branch in Oxfordshire.

Kevin Godfrey, Managing Director of Hartwell, commented, “We are really pleased that there is now such a competitive and high quality campervan conversion based on a Ford Transit Custom. That is why we have decided to introduce it to two more of our branches (Dunstable and Grimsby) and order 20 vehicles to ensure we have a good supply for our customers over the coming months.”

As part of its ongoing development process, Wellhouse Leisure conducted customer research for feedback on how the Terrier was used by its owners.

Most used the Terrier as an everyday car. Over 46 per cent intended to camp in their Terrier up to 10 times a year, and 41 per cent 20 to 30 times a year, while over 80 per cent will continue camping in them through the winter as well. Terrier owners also seem to be adventurous, with the survey showing 78 per cent planning trips abroad.

As expected, the most popular features of the Terrier were its sliding rear seat, because it makes the interior more versatile, the Ford base vehicle because of its quality feel, modern design, high specification and easy access to local dealers for servicing or parts (and while abroad). Other important reasons for choosing the Terrier were the quality of the conversion and its value for money compared to many Volkswagen-based rivals.

Everyone who replied to the survey agreed it was good to be able to view, buy and service their Terrier at a local Ford dealer. Almost half also drove Ford cars and had extremely good impressions of their quality, running costs and reliability. Over 70 per cent had considered Volkswagen-based campervans such as the California before deciding to buy the Terrier.

David Elliott, Managing Director of Wellhouse Leisure commented, “Our new sales record and the useful feedback from our customer survey proves that the Ford Transit Custom has quickly achieved acceptance as a modern campervan against the established Volkswagen Transporter.”

The Ford Terrier 2 is expected to be launched by Wellhouse at the Motorhome and Caravan Show at the NEC, Birmingham.

Here's the original review of the Ford Terrier, which was Campervan of the Year 2014.