The bluebell race is on 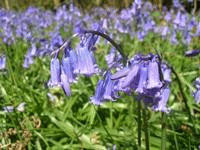 With unusually warm April weather, the National Trust has launched a Bluebell Watch to record where and when the first early-blooming bluebells appear.

To get the first New Forest flowers on the Bluebell Watch map, wildlife spotters are being urged to log their finds on Twitter by sending a tweet with the location’s postcode and tag #bluebellwatch via twitpic.

Bluebells with automatically be added to the map once a tweet is received.