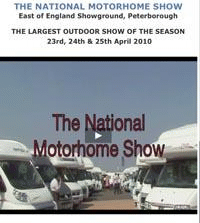 MEDIA students from a college in the Lincolnshire town of Bourne have captured the National Motorhome Show on film as part of their studies.

Jamie Collier, Teacher of Media Studies at Robert Manning Technology College in Bourne, Lincolnshire, approached exhibition organiser Warners Group Publications to see if the company would be interested in allowing some of his students film the show, which took place in Peterborough in March.

Exhibitions Marketing Manager Gretta Ryan said: "After initial discussions, we decided to make it a competition between the students. We had three groups who visited the show on the Friday and produced three different films.

"The reason that this team won was the fact that the film was accurate and included some people offering their views on the Show. They were really easy to work with and I have offered to support the winners with letters of commendation which they can they use in their portfolios for their course work."