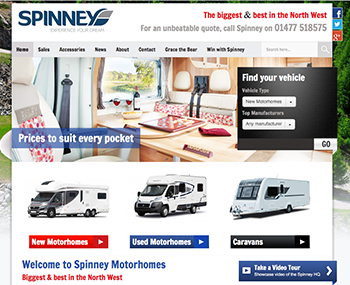 Last year, Alexis Hacques of Rapido developed the company's dealer network in East Anglia and Scotland, but for 2015 the goal was to offer a closer service to customers in the north-west.

Alexis explained, “This is the result of discussions with our customers, especially during shows. They wanted to get a service and sales point closer to their homes. We first listened to their needs in terms of product, developing the 9094dF, which was a real success, and the second step was really to enhance our presence and service.”

The new partnership with Spinnney Motorhomes has begun, with new vehicles due to arrive by the end of June. Ben Holland of Spinney said, “Spinney, as a business, has grown in so many ways over the last 40 years of trading in the motorhome market and has got long-existing relationships with all the major UK manufacturers. We felt it was time to introduce a European manufacturer to our current line up of motorhomes - as a business we were missing out on the A-Class market. After speaking in-depth with several manufactures we are very confident that Rapido is the right choice. Rapido works with the same family philosophy to ours and I am now looking forward to our first vehicles arriving this month and must say the future looks bright at Spinney.”

With the addition of this new family-run dealership, Rapido now has a network of seven, including Brownhills in the Midlands, Highbridge in South West, Thompson Leisure in Northern Ireland, Perthshire Caravans in Scotland, Simpsons Motorhomes in East Anglia, and Wokingham Motorhomes near to London, a company that started more than 30 years ago with the Rapido brand.

First vehicles will arrive at the new dealerships this month. Alex said, “The UK has always been one of  Rapido’s major export markets in the past and now among the top ones. Our constant presence, together with specific product developments for the UK as the 9094dF and a very proactive aftersales approach, has allowed us to establish Rapido as one of the leading continental brands.” Find out more at spinney.co.uk.