One campervan and his dog 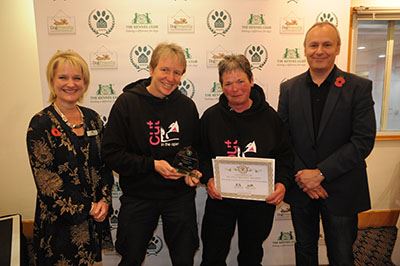 Bring your dogs on a campervan holiday


A campsite in Porkellis, Cornwall has received a prestigious national award for its dedication to dogs.  The Out In the Open campsite received the most nominations from the public in the Kennel Club’s Be Dog Friendly Awards, and took the lead to be crowned top dog in the Camping/Caravanning category.

The competition, held in association with Dog Friendly, is based solely on public vote and aims to break down barriers for man’s best friend by encouraging more businesses to adopt a dog friendly policy. Nominations have poured in from all over the country for the most welcoming dog-friendly businesses, towns, and public places.

Dee Breen and Cath Sears, owners of Out of The Open said: “We are still very much in shock. We can hardly believe that our small-scale campsite could win such a big competition. We would like to thank each and every one of our campers for taking the time to vote for us. We’ve both always been animal lovers and the campsite has been dog-friendly since it first began. We personally, couldn’t bear to go on holiday without our dogs and we aim to make it as easy as possible for our campers to bring their canine companions with them. Jester and Beano, our two Border Terriers, do recognise that they are very privileged to live here and are quite willing to allow others to enjoy their farm too!”

Caroline Kisko, Kennel Club Secretary, said: “We are so pleased for the Out in The Open. It is a wonderful example of the many businesses and public places that have already adopted a dog-friendly policy and are reaping the benefits of welcoming dogs.”

With over nine million dogs in the UK, and around one in four households owning a dog, the great British public are always on the look-out for places where their four-legged family members are also welcome, and the Be Dog Friendly Awards recognise businesses and places to visit that go that extra mile for our canine comrades.

The Out in the Open campsite is situated between the towns of Falmouth and Helston. It’s at the end of a narrow track, so suitable for campervans, rather than motorhomes, less than seven feet wide.

Discover more campsites thanks to Premier Parks or catch up on what other motorhomers thought of the places they stayed in the latest issue of MMM magazine.