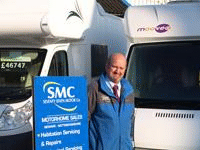 Newark-based dealer, SMC Motorhomes, has been undergoing some major changes over the past few months.

Not only has it recently moved into a new showroom on the existing site, but it has just appointed a new salesman, Neal James. Neal is very well known in the industry having been a major figure at Derby-based dealer, Motor Plus until his move to Newark.

Proving changes generally come in threes, SMC has also just gained Peugeot accreditation as an approved bodyshop. This means it is approved by the manufacturer to carry out crash repairs on its vehicles.

SMC was also the first dealer in the country to showcase the Pilote Diamond edition A-class motorhome at its recent open weekend. The Diamond edition is a celebration of the company’s fiftieth anniversary and is the flagship of the Explorateur range.

Find out more at www.smcmotorhomes.co.uk