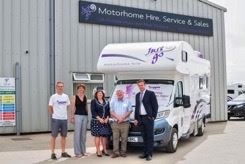 A 40-year-old man will attempt to be the first person to travel the 2,740 miles of British coastline in just 28 days, and he will be using a motorhome as his living quarters.

Richard Brash will be completing a quadrathlon every day – cycling, canoeing, running and swimming – to raise money for the Pepper Foundation, which provides home care to children suffering from life-threatening illnesses.

Throughout the month-long trek, he will be using a motorhome, provided by the Just Go motorhome hire firm, to both carry his bike and kayak and, of course, to sleep in.

Brash began his amazing trek on the 4 July from Bournemouth, and is currently in Harlech, Wales, and has already raised over £10,000.