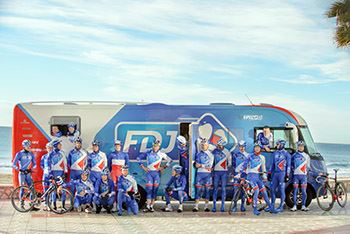 Having signed a two-year partnership with Team FDJ, Rapido is committed to supporting French cycling and believes the team has great potential. Rapido has stated that the reason for the partnership is to associate its name with Team FDJ, as they share the same values of high expectations and giving 100% effort.

In practice, this partnership has meant Rapido supplying a 10001 DFH, Rapido’s largest vehicle. This luxury A-class motorhome has been specially adapted to meet the needs of the FDJ cyclists. This special version of the 10001 DFH features a Rapido 9094dF rear, so the cyclists can enjoy a large rear living area in comfort.  A spokesperson for Rapido commented, “They will definitely appreciate this great extra feature after a race!”

Team FDJ fell in love with the Rapido 10001dFH FDJ the first time they used it. The 10001dFH FDJ will form part of the cycling team’s vehicle caravan during major French and European races including Paris-Roubaix, Paris-Nice, Critérium du Dauphiné, Tour de Suisse, Giro d'Italia, Tour de France and many others.

Find out more about Rapido motorhomes.