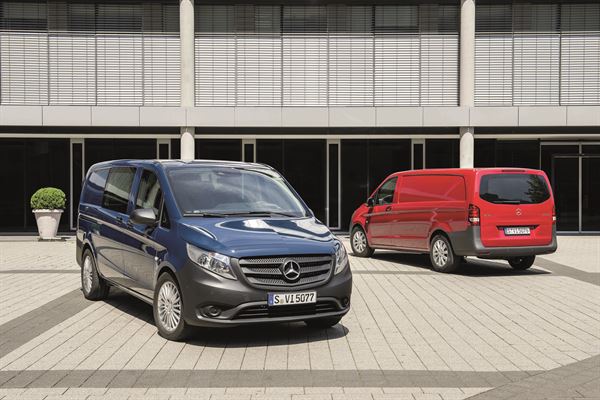 Mercedes has unveiled an updated Vito offering the choice of front- or rear-wheel drive for the first time, as well as the highest payload in its class. Front-wheel-drive models come with a transverse 1.6-litre CDI engine of
88 or 114bhp, while rear-wheel-drive options include 2.1-litre motors of 136, 163 and 190bhp.

The first Euro VI engine in its class debuts in the range-topping Vito 119 BlueTEC, which also comes as standard with a seven-speed torque converter automatic (this gearbox also being available on 136 and 163bhp derivatives).

Optional Active Parking Assist parks the new Vito for you, requiring the driver to operate just the accelerator and brake, while another unique feature for vans is the Intelligent Light System (LED indicators, LED daytime running lights, LED low beam headlights and main beam with cornering function, as well adapting lighting
to your speed and the type of road).

The new Vito comes in three lengths (an extended front adding 140mm overall) and three weights. UK pricing and specification is yet to be confirmed.