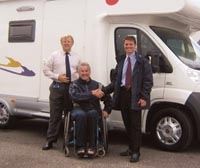 MARQUIS Motorhomes has handed over the keys of a new SEA CPT motorhome to the national service charity, the SBS (Special Boat Service) Association.

The motorhome was kindly donated to the SBS Association by the Royal British Legion and will be available for recreational use by families of military personnel who are away on operations; bereaved families; injured military personnel and their families and retired veterans who are in need by virtue of sickness, injuries or financial hardship.

Marquis supported the charity by donating a number of extras, including a four-metre awning, radio/CD-player, European sat-nav and an LCD TV/DVD-player.