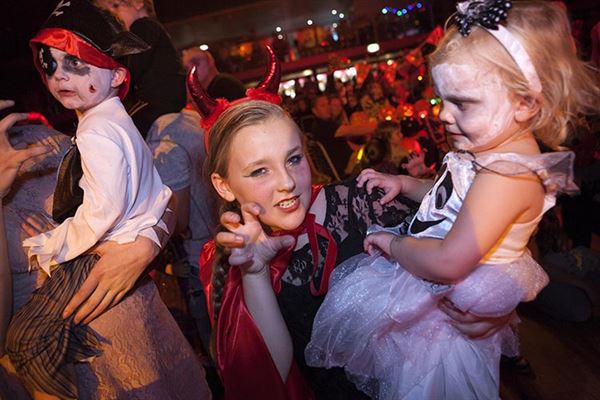 Those looking for a fun-filled October half-term can join the ‘All Hallows’ themed games on offer, whilst anyone looking for something quieter can enjoy the natural beauty spots found near parks lit up in their autumnal colours.

With all of Parkdean’s 24 parks open for October half-term in Devon, Cornwall, Dorset, Norfolk, Hampshire, Scotland and Wales, there’s every landscape and location to choose from and a variety of quality accommodation on offer including lodges, caravans or tent and touring pitches.

Entertainment passes are free on all parks for the half-term holiday period so the whole family can enjoy the spooky spectaculars in the evening and children can enjoy kids clubs every day at no extra cost, but there’s a bit of a twist this autumn.

Dig out your best witch, wizard or werewolf costume to get involved in the fancy dress competitions on at various parks, or to get you in the mood for mystery, fun and games under the moonlight.

This lively park has a choice of caravans and lodges, an indoor heated pool and Showtime evening entertainment for the whole family. It is also just fifteen minutes’ drive from Great Yarmouth, a beach which was voted as the 10th best in the world by modern families in a 2015 Post Office Money survey.

Prices start from: Seven nights, arriving 23 October, from £379, staying in the Stokesby caravan which sleeps six.

Close to pretty coves and coastal walks, Mullion Holiday Park is in an area steeped in spooky history. Smugglers raided this part of the world in times gone by and it still has plenty of treasure for holiday makers to discover.

There’s a choice of caravans, tent and touring pitches available at Mullion and fantastic Showtime entertainment. Parkdean characters Sid and Lizzie will be leading the Halloween celebrations on Tuesday 27 and Saturday 31 October while the Parkdean Troupers will be performing Halloween inspired performances.

Halloween decorations on park will get trick or treaters in the mood for the games, fancy dress competitions and pumpkin-carving throughout the week.

If it all becomes too creepy, get out and explore this area of outstanding natural beauty. The nearby town of Helston is worth a visit and The Seal Sanctuary is Europe’s busiest seal rescue centre.

Prices start from: Seven nights, arriving 23 October, from £269, staying in the Veryan caravan which sleeps four.

This coastal holiday park has caravans available just minutes from the beach. It’s famous as a location because record-breakers regularly attempt to beat the land speed record on the flat sands which stretch out for miles, but instead of finding cars on the beach this October you will find zombies…

Set in Carmarthenshire (The Garden of Wales), Pendine Sands is the perfect base for exploring this part of the world. Visit local attractions Oakwood Theme Park or Laugharne Castle on a day out, or try fishing or horse riding to take in the beautiful landscape and surroundings. Splash in the indoor pool on park, try the ice-cream sundaes at the new Sunbeam Diner and get your best haunting outfit on for one of the many Halloween activities.

On Thursday 29 October, there’s a Zombie run for teenagers and a similar activity for young children.

A Halloween performance open to everyone will be revealed on Thursday evening and the day will end with a fancy dress competition – start practising your face painting now!

The spook factor doesn’t stop there, on Saturday 31st October there will be pumpkin-carving, adult game shows, another fancy dress competition and a Halloween party in the evening with a few scary surprises.

Prices start from: Three nights, arriving 23 October, from £199, staying in the Pembrey caravan which sleeps six.

Wemyss Bay, set on the stunning west coast of Scotland, is an ideal holiday destination for families who want space to explore, time to chill out and a chance to get crafty this Halloween.

There’s caravans and lodges available with breath-taking views overlooking the Firth of Clyde and an indoor pool and sauna, perfect for parents who need to re-charge their batteries while children get creative for Halloween. Kids clubs will be making window decorations, creepy bunting, finger puppets and other spooky surprises that children can take home as a holiday souvenir.

Other activities which will give you holiday memories which last forever include costume making sessions for all ages so you can prepare for the fancy dress competitions and entertainment shows in the evening from the Parkdean Troupers and characters Sid and Lizzie. To complete the weekend, a pumpkin carving session will be open to all ages on Saturday.

Golf and fishing fans will be pleased to hear there’s an impressive selection of golf courses and fishing spots near the park. Go and take in the beautiful views which appear as summer turns into autumn on the west coast of Scotland.

Three nights, arriving 23 October, from £159, staying in the Stuart caravan which sleeps eight.

Set in the Scottish Highlands, Grannie’s Heilan’ Hame is next to the beautiful white sands of Embo, an award-winning two mile beach where the dark sky fills with stars on a clear night, making it the perfect place to enjoy Halloween in October.

Lodges, caravans and touring and camping pitches are available on the park which has evening entertainment, kids clubs and The Boston Bar & Restaurant, there’s also a heated indoor pool with spa baths.

Families who visit at half-term will get the chance to show off their best masks and make up at ‘Chiller Thriller’ Halloween theme nights on Wednesday 28 and Saturday 31 October. They will also be given the chance to carve their own pumpkin into a jack-o-lantern at 2pm on the Saturday afternoon.

If you want to explore more in the area Grannie’s Heilan’ Hame has lots of spooky castles, stunning waterfalls and wildlife parks nearby.

Stuck for somewhere to go, try our Campsite Finder for your perfect pitch.