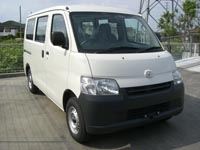 RISING fuel costs and concerns about the environment have led to increased demand for one of the most green and economical MPV conversions on the market, one company has noted.

Wellhouse Leisure sold their entire stocks of the Daihatsu Atrai and its re-badged cousin the Toyota Sparky forcing company owner David Elliott to make an emergency dash to Japan to procure another batch.

David had also noticed an increase in queries about the Honda Stepwagon and the Toyota Noah, both small and economical campers, but he wanted to provide a further option for those who were prepared pay for something newer.

It was on his recent visit that David discovered a new release from Toyota that was just what he was looking for - the Townace van.

“We already had been importing the smaller Honda Stepwagon and also the Toyota Noah which we can also supply with a manual gearbox but we needed something newer and on a visit to Japan two weeks ago we found that Toyota had just released something called the Townace van."

The Townace fits in between the very small Toyota Sparky and the Mazda Bongo.