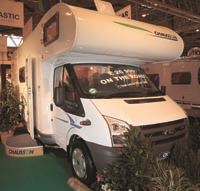 FOREST Holidays has launched a new service that will interest people who want to try out a motorhome before making a buying decision.

Holidaymakers heading for its Forest of Dean and Ardgartan sites have the chance to hire a five-berth Chausson Flash 03, the motorhome that scooped Which Motorcaravan’s Best Family Motorhome Award both in 2006 and 2007.

Users are expected to spend their first night at either site, where they’ll be given a familiarisation hand-over. After that, the motorhome can be taken to your choice of destination in the country, though preferential rates will be made available at each of Forest Holidays’ 21 sites.

Called The Forest Store, it is a retail and coffee shop for people staying, initially, at Holmsley in the New Forest, Christchurch in the Forest of Dean and Keldy Cabin Site on the North Yorkshire Moors.

Products stocked will be locally sourced and the stores will also embrace organic and environmentally-friendly items. They will also be involved in the recycling of waste and in the use of recycled materials where possible.