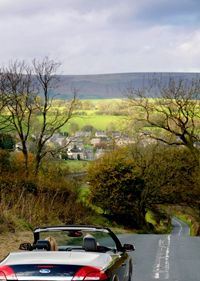 In 2012, Lancashire commemorates the 400th anniversary of its infamous Witch Trials.

In 1612, a simple curse from the young Alizon Device resulted in the paralysis of a passing peddler and proved the catalyst for a Lancashire-wide search to uncover witches. It was the year that at least 20 Lancashire witches were tried and ten sentenced to be hanged in England’s most infamous witch hunt.

Lancashire will commemorate the 400th anniversary with an array of events, new artworks, theatre productions, exhibitions and conferences; running from the start of the original story in Pendle in March, until August when the trials took place and the witches were hanged in Lancaster.

Motorhomers may also be interested in following the route taken by the largest group of accused, the Pendle Witches, stretches from small picturesque villages in Pendle through the Ribble Valley and the the Forest of Bowland, to the courtrooms of Lancaster Castle.

Today, this 45-mile Pendle Witches Trail can be explored by motorhome or bike and offers attractions, historic inns, art and sculpture trails and the unmissable Pendle Hill.