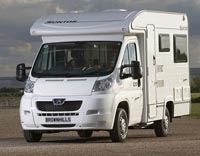 Despite a pricetag of just £25,995, the Peugeot Boxer-based Elddis Autoquest 120 saw off strong challenges from the UK and Europe’s biggest manufacturers to take the Best Coachbuilt up to £36,000 category as well as the overall title.

In a deliberate departure from the traditional awards venue in the capital, the trophies were presented during a ceremony at Highclere Castle in Berkshire.

He said: “We specifically changed the venue of the awards to a venue outside the capital as a response to London's Low Emissions Zone (LEZ), which effectively excludes many motorhomes from the city unless they are prepared to pay punitive charges.

“We simply didn't think it was appropriate to hold the awards in an area where motorcaravans are clearly unwelcome and their owners being harrassed in this way.

“We will continue to contribute to the debate over road pricing and emissions legislation and demonstrate to those in power that motorhome touring is part of the solution - not part of the problem.”

The Elddis triumphed in a field of 56 motocaravans - the largest entry in the history of the awards - with British manufacturers dominated five of the seven classes. Other class winners included Auto-Sleeper's new Sigma EL in the £36k - £45k coachbuilts class and Scottish specialist van converter East Neuk's innovative Fifer Touring SWB.

* Look out for the special Design and Drive supplement - with in depth reports on all the winners - distributed free with the July issue of MMM (on sale June 26) and the August issue of Which Motorcaravan (on sale July 10).