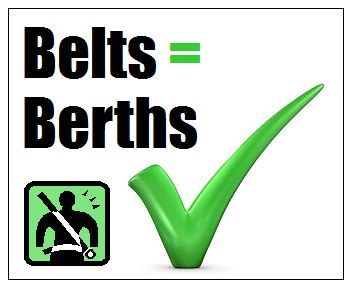 Elddis has claimed it manufacturers the safest motorhomes in the UK following the launch a year ago of its ‘Belts = Berths’ motorhome passenger safety campaign.

"Our Belts = Berths crusade is very simple. You would never allow your family to travel in a car without seatbelts, so why would you compromise their safety in a motorhome without seatbelts?" said Elddis Managing Director, Rob Quine.

“It has been a long held belief of mine since my first family trip in a motorhome over ten years ago that it is wholly inappropriate for a responsible motorhome converter to develop and offer for sale, for example, a four berth motorhome which has only two seat belts.

“I only had to see the steam coming out of my wife’s ears and then looked into my children’s eyes when I told them all those years ago that it was a  ‘loophole in the law’ which allowed motorhomes to carry unrestrained passengers to know that my conscience would not allow me to be in charge of a Company that exposes its customers to such potential danger.  It is just wrong!"