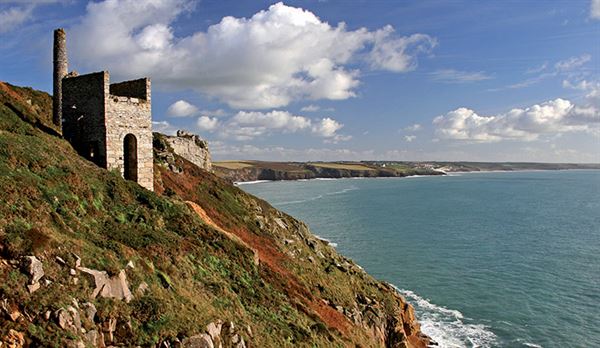 In July 2006, the Cornwall and West Devon Mining Landscape was added to the UNESCO list of World Heritage Sites. To celebrate the 10th anniversary of this achievement, the Cornish Mining World Heritage Site Partnership has commissioned a summer-long set of inspirational events and experiential happenings entitled Tinth. Every one of the ten areas of the UK’s largest World Heritage Site will host events that focus on Cornwall and west Devon’s world changing industrial innovations.

The key commission sees the creation of the Man Engine, a 12m high steam-powered giant who will quite literally stride the length of the Cornish Mining Landscape over the course of two weeks.  The brainchild of Will Coleman, of Cornwall’s Golden Tree Productions, part man, part machine, the towering metal Man Engine will have a real fire in his belly, a beating beam-engine in his heart and the ‘entire Industrial Revolution in his head.’

The largest puppet ever made in Britain, the awe-inspiring cast-iron Cornish miner, will be accompanied by more than a dozen miners and bal-maidens who will animate the steam-powered giant, heaving on coal, ensuring that flames roar, and steam belches.  From 25th July to 6th August the colossal Man Engine will make his journey, step-by-step, from Tavistock to Lands End, literally walking and crawling through each one of the ten World Heritage Site mining areas.

At each of these key Cornish mining locations, the Man Engine and his cavalcade will be greeted by a set of pre-planned ceremonies, events and locally-flavoured celebrations.  Ancient mining chimneystacks will be smoking once again, traction engines will be in full steam, choirs will be in full voice and brass bands, schoolchildren, bal maidens and miners will all be dressed in 1800’s costumes, as they observe and experience their own area’s history and significance within the World Heritage Site.

Another commission, Picturing The Mines, will see nationally renowned print makers and artists, Jesse Leroy Smith and Bernard Irwin, working with local communities in each of the ten areas to find new ways of quite literally picturing the mining heritage.  The creative collaboration will result in ten powerfully evocative etchings of the WHS mining landscapes. Printed from copper plates, a set of limited edition prints will be sent across the region and internationally as a lasting record of our mining heritage.

Through Picturing the Mines Jesse and Bernard will also create dynamic visual maps of the mining landscape and heritage in public events in each of the ten WHS areas. Ideas from these sessions will inspire a treasure trove of images from which they will select ten to be made into powerful copper etchings. The final works will be presented as a permanent archive to the Cornish Mining World Heritage Site in two hand-made boxes embellished with mouldings cast in Cornish Tin.

A host of recognised Cornish Mining World Heritage locations and partners are also set to announce Tinth events and happenings in the coming months.  As part of the programme, on the 1st July, The Trench at Levant Mine willmark the 100th anniversary of the first day of the Battle of the Somme. Marking the First World War Centenary commemoration, a remarkable event will take place at this evocative cliff top site. An immersive theatrical experience that simulates life in the trenches using an area of No Man’s Land landscape at Levant Mine, The Trench will involve the enlisted audience exploring and celebrating the lives of Cornish miners serving on the Front Line during the First World War.

Cornish Mining World Heritage Site Co-ordinator, Deborah Boden, said, “The mining communities of Cornwall and west Devon were industrial pioneers, inventing new technologies and techniques for extracting vital metals from deep, hard rock, and becoming internationally recognised for their skill as a result.  We developed the concept of a Tinth anniversary to celebrate ten years as a WHS with the communities that live in and care for the Site today. The Tinth events programme will enable people to see, learn and experience the meaning of the World Heritage Site, and what lies behind it all.”

Cllr Julian German, Chairman of the Cornish Mining World Heritage Site Partnership said, “Tinth will bring something for everyone - schoolchildren, the general public, the wider community, visitors to the WHS and also to the Cornish mining diaspora across the globe. Tinth will bring alive the past, showing its meaning and significance in the present – and for the future.”