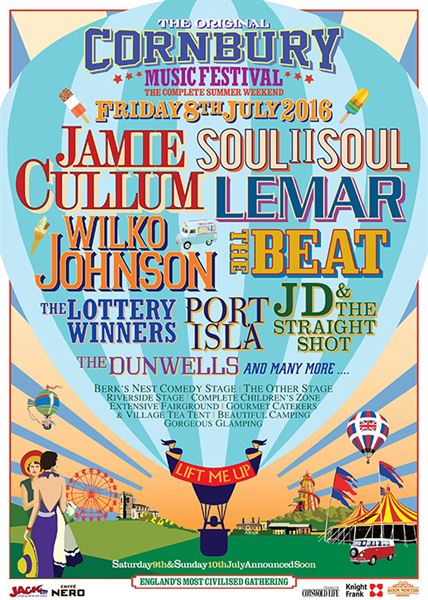 The campervan-friendly music festival held at Great Tew Park near Chipping Norton, Oxfordshire on 8-10 July has announced who will be playing this year. Topping the bill on Saturday is the most elegant man in music Mr Bryan Ferry, along with Gospel diva Mavis Staples, purveyor of The Power of Love, Gabrielle Aplin and original alt-country star Lucinda Williams.

After his triumph as surprise special guest last year, Seal returns with his own headline slot on Sunday, along with celebrated singer-songwriter James Morrison and guitar virtuoso Newton Faulkner. 60s rock combo The Zombies join the cast, as does Lighthouse Family frontman Tunde who revisits the band’s classic catalogue.

Cornbury perennials Staxs return to their regular Sunday slot, with bets already being taken on who their star guest will be this year. Noah & The Whale guitarist Fred Abbott showcases his new band, Kelvin Jones brings a soulful edge, and musicals star Ramin Karimloo makes his major UK festival debut with a touch of bluegrass. Probably the best party band in the world, Bjorn Again, close the festival from the Songbird Stage in true ABBA style.

Other previously announced artists joining the party over the weekend include Jamie Cullum, Soul II Soul, Lemar, Wilko Johnson, The Beat along with newcomers Port Isla and The Dunwells.

To buy or upgrade tickets go to www.cornburymusicfestival.com/tickets or call the ticket hotline 0844 338 0000. Camping facilities for motorhomers will be released shortly.

Get the campsite you want with our Campsite Finder.