Cheap ferry business from Dover to be sold 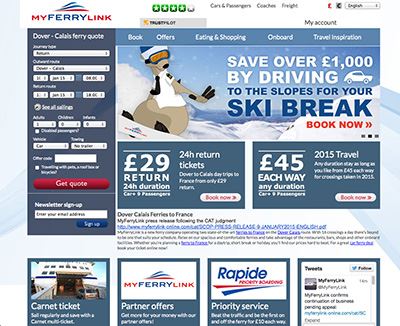 Following a ruling from the Competition Appeal Tribunal (CAT) the MyFerryLink business, which is owned and run by Groupe Eurotunnel and offers very cheap fares from Dover to Calais, has six months to cease operations. As a result, MyFerryLink is now up for sale.

Jacques Gounon, Chairman and Chief Executive Officer of Groupe Eurotunnel stated: “MyFerryLink is an operating and commercial success. We are proud to have succeeded where so many others have failed. Given the position of the British authorities, the future of MyFerryLink will now be determined  outside the Group”.

The Competition Appeal Tribunal (CAT) acknowledged the case put forward by Groupe Eurotunnel as regards having subcontracted operating the actual ferries to SCOP SeaFrance, a co-operative mainly composed of former employees of SeaFrance but decided that this was not sufficient to overturn again the decision taken by the Competition and Markets Authority (CMA), published on 18 September.

Groupe Eurotunnel complained that, “This decision is illogical. It reduces competition across the short straits and it is contrary to the interests of free trade. The CAT is forcing Groupe Eurotunnel to withdraw from this activity.”

The background to the ferry service being sold began when SeaFrance went out of business and Groupe Eurotunnel acquired its ageing assets in June 2012. Operations began in August 2012 under the MyFerryLink business where very cheap prices, sometimes as low as £20 for a crossing, were on offer if you booked in advance. The ferries themselves were older and more tired than rival fleets.

The Competition and Markets Authority (CMA) first looked into the situation and ruled against Groupe Eurotunnel in June 2013, but a series of appeals has dragged the process out until the final resolution today where the MyFerryLink business admitted defeat and was placed up for sale.

The reasons for the decision are, according to Alasdair Smith, Chairman of the of the Eurotunnel Remittal Group and CMA Panel Deputy Chair, “With two of the operators on the Dover–Calais route making substantial losses, it remains our view that the current level of competition on the route is unsustainable and likely to lead to the exit of a competitor. That will leave Eurotunnel, which is funding MyFerryLink’s current losses, as one of only two ferry operators in addition to owning the competing rail link. Eurotunnel’s purchase of the ferries means it now has over half the market and its share will rise further if competitors exit.

It would be much better for passengers and freight customers to have three competing cross-Channel operators – with Eurotunnel running the rail link and two independent operators on the ferry route. We will stop MyFerryLink running services out of Dover while it is owned by Eurotunnel but we would not prevent Eurotunnel from finding a suitable purchaser that was completely independent of Eurotunnel to operate the ferry service. Our primary concern is to protect competition on the route for the benefit of customers.”

Keep up to date with ferry crossing routes and timetables with a digital subscription to MMM magazine.