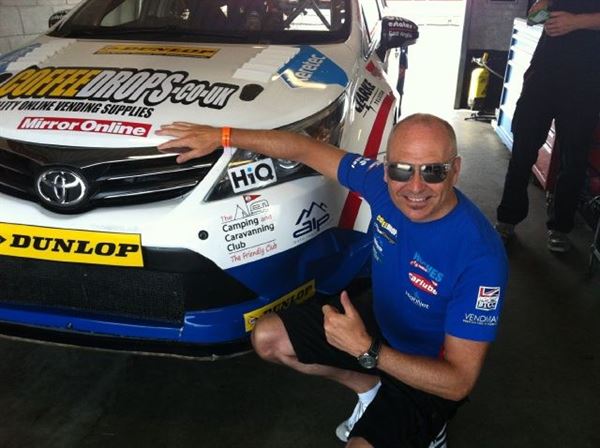 Dave, who won the Renualt Clio Cup in 2010 with 12 race wins before stepping up to touring cars, has been camping and caravanning since 2004 and is keen to raise awareness of the outdoor lifestyle.

The announcement comes as the drivers gear up for the sixth round of Britain’s premier racing series, the Dunlop MSA British Touring Car Championships (BTCC) at Snetterton this Sunday (August 4).

The 46-year-old Camping and Caravanning Club member, who will be travelling to the race in his Autotrail Arapaho motorhome, said: “Living in Inverness, my family – myself, my wife, Jackie and my sons, Kristian and Callum - spend a lot of time travelling around the UK in our motorhome, using Camping and Caravanning Club Sites to stop overnight en-route to and from race circuits – including Snetterton.

“Having my motorhome at the circuit is great for me to have a base; somewhere I can go and have time to myself during a very fraught weekend. With up to 40,000 spectators, and three races a day, it's a full on experience.

"Some drivers like to stay in hotels; some even fly into the circuits in helicopters. For me, I love having my home-from-home. There is something special about camping, I've always enjoyed it."

Robert Louden MBE, the Club’s Director General, added: “We’re delighted to be supporting such a world class driver and we’re looking forward to seeing how Dave progresses this season.”