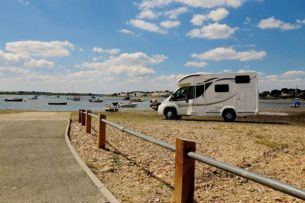 The re-introduction of Benimar, the Spanish motorhome brand sold exclusively here by Marquis, is being heralded a major triumph after two successful NEC shows and the winning of a major motorhome award

Following its re-introduction to the UK just seven months ago, Marquis has extended the Benimar range of coachbuilt motorhomes to a choice of five models starting at £42,995. All the motorhomes are based on a Fiat Euro V+ chassis and powered by its 130bhp engine.

All the Benimar models feature high-density XPS damp-proof insulation and a GRP coating inside and out that eliminates most wood and reducing weight, which means improved payloads and all sitting within the 3.5-tonne category, meaning they can all be driven by those holding a normal car licence. There is also a no-cost option to upgrade all models to the higher 3,650kg MTPLM and take advantage of a subsequent payload increase.

All models are specified with driver and passenger airbags, cruise control, ABS braking, automatic lights and wipers, cab air-conditioning and reversing camera as standard. You can also specify the Fiat Comfort-Matic auto transmission as an added extra.

Marquis, which is the UK’s largest dealer group with 11 sales outlets, showed three Benimar models at last October's NEC show in Birmingham, including the Benimar Mileo 201, which went onto win the 2015 Compact Motorhome of the Year award.

And, if you want to learn more about this Spanish brand, you can do so by clicking this Benimar link