Award winning motorhomes at the NEC 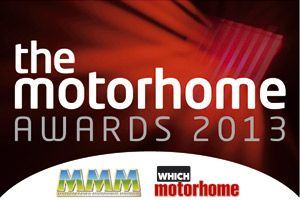 Following their success at The Motorhome Awards 2013, a number of major manufacturers have confirmed they will be displaying their award winners at the Birmingham NEC’s Spring Caravan and Camping Show.

Visitors to the show (19-24 February) will be able to see just why these motorhomes and campervans from Pilote, Bailey, Bilbo’s and Rapido were all recipients of this year’s awards.

Highlight of the displays will be the winner of the best new motorhome to be launched this year - the Pilote Référence P716 LPR – which has been named overalll winner to take the title Motorhome of the Year 2013 by MMM and Which Motorhome magazines.

The vehicles exhibited will be:


If you are thinking of buying a new motorhome or campervan this year, make sure you take a look at these award-winning motorhomes first. Our expert judges have done the research and the testing, so you don't have to!

The Motorhome of the Year Awards are the most important motorhome awards in the country and identify the best new motorhomes and campervans to be launched onto the UK market each year.
Find out more about The Motorhome Awards 2013

And remember - you can see ALL of our Awards winners at the National Motorhome Show, Peterborough!


Find out more about the Spring Caravan and Camping Show