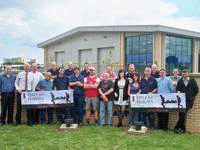 Staff from Auto-Trail have raised more than £2,300 in aid of their chosen charity, Help for Heroes, in the last few weeks.

To raise the money, a team of 19 set out to tackle the Three Peaks Challenge. There’s a 12 hour time limit for the challenge and 18 of the 19 achieved that, with the fastest staff member blazing the trail in less than seven hours.

The event started at Horton in Ribblesdale at 6am. and climbed Pen-y-ghent (694m), Whernside (736m), and lastly Ingleborough (723m). The total distance walked varies between 22 and 24 miles, depending on the route taken up Whernside.

“The staff at Auto-Trail have been dedicated to charity fundraising for many years and have raised more than £17,000 in four years. Our customers also like to get involved, making donations after factory tours," said Auto-Trail's Scott Stephens.

“The achievements of injured service personnel supported by Help for Heroes was an added inspiration for this year’s Three Peaks Challenger team to do well.”

Well done to the Auto-Trail team!