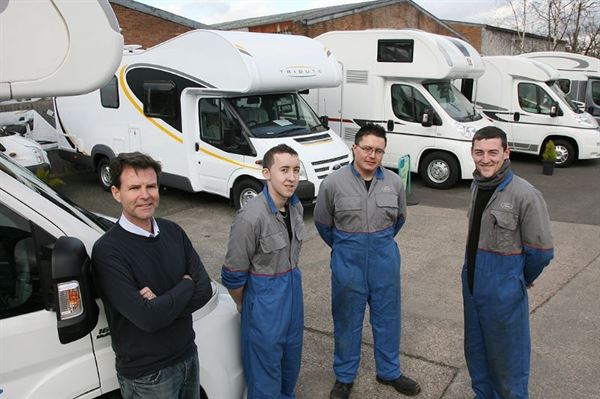 The motorcaravan dealership, Geoff Cox, of Denby, which also sells cars, said it is considering recruiting more youngsters following the success of its latest apprentices.

Eighteen-year-old Ashley Hill, of Ripley, joined the company in August 2010 and was the first apprentice recruited to join the training programme for Ford. Geoff Cox became a dealer for Ford last year with authorised repair and workshop facilities.

Managing director Neil Cox discovered Ashley when he went to the open day at his son Aidan’s school, John Flamsteed, in the village. Neil was speaking to deputy head Calvin Rees, who taught him as a youngster, about apprentices and Calvin mentioned the youngster.

Calvin took Ashley to the company’s premises in Derby Road for a look around. Ashley was up against seven other applicants but beat them in the selection process.

Ben Horsnall, of Ilkeston, has been doing a double training programme – the Ford apprenticeship scheme and another for motorhomes.

Twenty-year-old Ben joined the company two years ago after studying at Southeast Derbyshire College where he gained a level two City and Guilds qualification in motor vehicle repair and maintenance.

Another success has been 24-year-old Stuart Ryan, of Smalley. He had already worked at a garage in Codnor before joining Geoff Cox in October 2010.

He passed his exam on the Ford training after four months, compared to the usual 12, to become a fully-fledged technician and now hopes to qualify as a senior.

Neil said: “It’s good to have local people who understand the local area and are proud to be working in their community. They have all done well in the training and exams.

“The apprentices are a valued part of the company and we are looking forward to them qualifying as full technicians.”