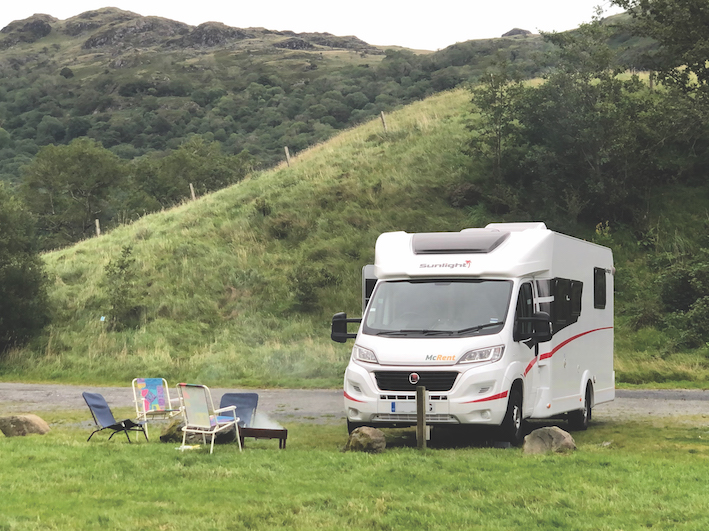 Why we hired, by Ronald van Wensweem

Our quest to own a motorhome and join the motorhome community and the freedom it gives with the connection to the outside world has started. We have been camping for years but the time has come to pack up the tent and upgrade. We are fortunate that we are now able to join this community in the next few years as we look towards our retirement. Hopefully it will not have been spoiled with the sudden increase and uptake due to COVID.As it takes on something like 18 month before most purchase their first motorhome, I can concur that this is true for us, in fact may even take us longer.Last year my wife and I attended the Motorhome exhibition at the NEC, something we wanted to do for a while. We wanted to have a look and see what all the fuss was about and see if this would suit us for during retirement. The show was great and gave us enough inspiration to explore further. Then COVID hit and lockdowns started, with no where to go we were fortunate to be able to hire a motorhome for 10 days in early August.

McRent has 100 depots across the world with vehicles no more than two years old.

The plan was to pick up the motorhome and head to Snowdonia. Typically, while the weather was amazing the for rest of the country, it didn't match that in Wales.

I have to say with all the hype of multiple awards the Fiat Ducato has won I was expecting almost perfection. I was therefore surprised to find the gearbox a terrible first experience with so much play between gears, I am used to something more precise and quick. This took me a while to get used, after swearing occasionally, which is unlike me, however towards the end of the holiday I no longer had any issues, perhaps was just more relaxed not needing to get anywhere fast and just went with the flow.

A lot of research took place to identify where to stay overnight, what places to visit and where I could potentially park. I soon learned that we would need to stay at campsites as wild camping is not really supportedin the UK. I thus had a very detailed itinerary for each day, where to stop and try and park and as not all campsites were open due to the restrictions, they were at half capacity I decided to book the majority up front bar the last few days.

There was a load of road noise on the motorway that made it a little difficult to hear others, and throughout the staycation there were the teenage water bottles that flew off the table when braking, as well as some white knuckles when I hid the smaller narrow roads of Snowdonia until I got used to the size of the vehicle, but even then there were times I wish I had a slightly smaller motorhome. One campsite required a turn almost back on itself to access the site, fortunately with a combination of luck and like to think some skill I did not have to reverse back uphill into traffic to adjust my turn!

On our way up to Snowdonia we stopped by the pretty town of Llangollen, which was not on my detailed Itinerary. We needed to park in the coach bays along with other motorhomes, as there was hardly a single bay left let alone two bays in a line. We only got away with this as there were no coaches due to COVID; we would have been able to park here normally.

Early on in the trip while stopped at a traffic light the road ahead had a bridge and I could see the height restriction sign of 3.3m. Now I never pay attention to these as only drive a car, but by brain engaged to tell me that I am now driving a motorhome and wondered how tall this vehicle actually was. With a bit of visualisation I concluded that I need not worry and would easily fit, but this got me thinking what if we did come across a low bridge I had no idea what the height of the vehicle was.

That evening I looked up the details in the handy information folder provided and created a crib sheet of the motorhome dimensions that I stuck to the windscreen just in case. Sure enough some days later we needed to drive through the pretty town of Conwy with its town walls to get to our destination (Conwy Holiday Park) for our stay. Upon approaching a small roundabout I could see a height restriction sign on the exit I needed, no problem I thought, I have my crib sheet to refer to. Alas it was of no use as the sign only had the height in feet, and I only noted the metric measurement! I knew I would not be able to convert this to metric in time so shouted to my teenage children to do the conversion on their phones, this I also knew was not going to be done in time, so promptly took another exit.

Upon getting my answer from the back the height restriction was a non issue, so turned round and took the approbate exit. As I turned round the corner I could see the tall arch in the town wall, however I was now concerned about the width as it looked rather narrow, but managed to crawl through without taking the wing mirrors off. I had to use that route a few times during our stay in this beautiful town, and by the end did not know what I was fussing about on the first day.

One final note, the holiday park was fine and although allows motorhomes it strangely has no motorhome facilities to empty your grey waste, we could only find one drain in this vast park on a hill, which we did use.

I had planned a Go Below Adventure. On the day, the company called to say we’d have to drive in a convoy to the mine, and I immediately stated I was in a motorhome, but were informed it had someone who could drive us down. The meeting point was a small car park used for a local waterfall attraction (Conwy falls) as well as a café.

We were extremely lucky that I was able to park the motorhome, as it clearly was not geared up for these types of vehicles. Then the bad news that we no longer had a lift and I would need to drive down to the starting point down a small B-road. I was a little apprehensive but had no choice. Yes, I did meet a bus on the way back, but as luck would have it, it was on the widest possible section of the road.

I had also planned to visit Beddgelert on a recommendation of a friend for the local ice cream and a walk along the river. An enquiry to the local council confirmed that you cannot use coach parking bays. As we would be taking up two car parking bays with such a large vehicle we would need to pay for both bays. Now the likelihood of finding two bays in a row I assumed would be somewhat limited, not to mention with a full-width motorhome you may well block others from being able to get back into their vehicles. Upon arrival at the small car park there were no spaces at all. So plan B was to drive further out, find somewhere to park and cycle into the village. As we drove out from the car park we spotted parking at the Royal Goat Hotel at a reasonable price, which was very convenient.

The weather was somewhat miserable for half the holiday with quite a bit of rain and chilly, but we still had a great time and knew this would be the beginning of a new chapter in our lives.

The experience of renting was invaluable. It made me realise that I do not want such a big vehicle, so a 6m (or just over) motorhome should serve us well. I would also want a narrower body to make driving on narrow roads more relaxing and enjoyable to enjoy the view.

Ultimately you should not need such planning and just go where the wind takes you. This may be easier in Europe with aires etc, but trying to park a beast of motorhome in a small village in the UK will always be a challenge. Thus bicycles are a must for us or even a moped that would allow us to park further afield and cycle to the village/town. It looked extremely big on our small driveway!

If you have finished reading this review, return to our 'Motorhome Hire Guide' for more advice and tips.