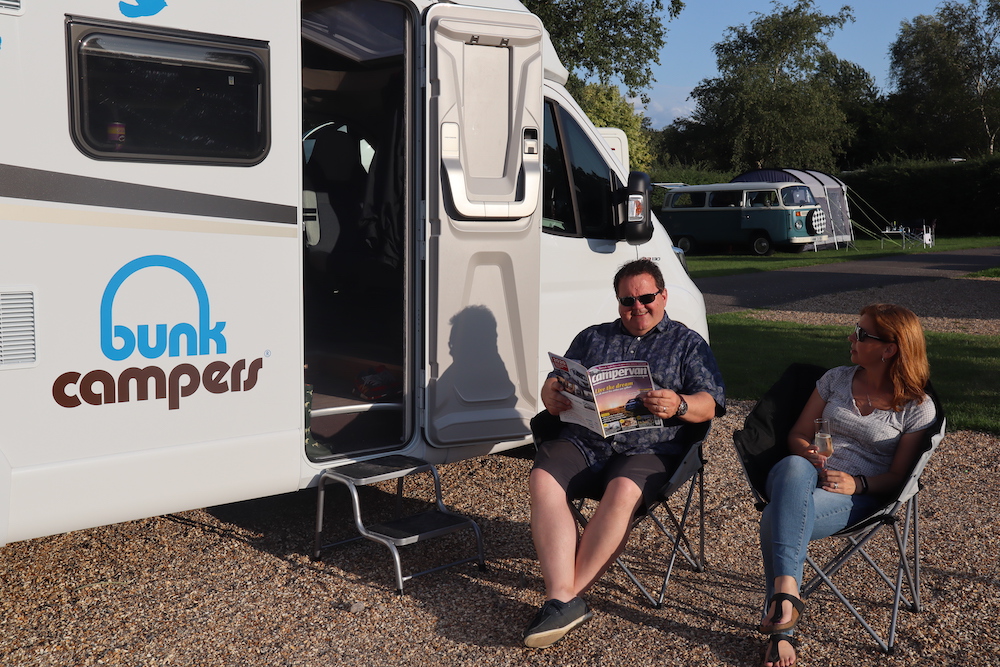 Why we hired, by Claire and Andy Honeywood

I spend some of my spare time at a yard around horses, so a bit of dirt doesn’t really bother me. However having seen those photos of Glastonbury with the seas of mud, festivals have never really been on my list of things to do. My husband, Andy, will avoid jobs in the garden that may get his hands dirty, so I thought we were on the same page on this.

Therefore it came as a great surprise to overhear Andy talking to his good friend, Mark, and agreeing to go to Rewind festival. When we met up with Mark a few weeks later, I asked what the deal was… “We stay at Swiss Farm Touring and Camping in Henley, which has full facilities and catch the water taxi over to the event each day” he told me. I’m sure he could see the relief on my face as I replied “that sounds great.”

My next dilemma was accommodation. We’ve camped out on air beds on the floor at friends and families houses in the past for the odd night. Whilst it always seems like a great idea, the reality is a lack of sleep feeling like we’ve been trying to sleep on a roller coaster and the bed always seems to lose air. So the offer of a tent was politely declined.

We stayed in a campervan for the first time last year and, while hubby complained it was bit on the small side, he otherwise enjoyed the experience. So research began for something along those lines that might meet with Andy’s approval.

Bunk campers has seven locations around the UK and Ireland – Edinburgh, Glasgow, Leeds, Birmingham, London, Belfast and Dublin. All are located close to airports and transport hubs making them easy to get to should you be flying into the country. For those wishing to travel further afield you can also take its ’vans across to mainland Europe.

The weekend was soon upon us and with the Friday predicting a months worth of rain in one day, and the rest of the weekend looking mixed, we packed the car to the brim for every eventuality and headed to Bunk Campers. I’ve explained the difference between a campervan and a motorhome numerous times, but as we pulled up onto the forecourt, Andy points at a motorhome and excitedly asks “Is that ours?” I rolled my eyes and replied “no we have a campervan booked!”

Paul and Jordan met us in reception and we went through the paperwork, which was actually straightforward as we were able to provide most of the details online before we arrived and we sensibly chose the Platinum excess package to reduce our security deposit. The next thing I know, Jordan has taken us out to the motorhome to show us around and explain how everything works.

The motorhome is their Aero Plus and is actually pretty much the same layout as the Aero, the only difference being that we could sleep lengthways in the bed instead of widthways. It makes for a slightly longer vehicle but hubby wasn’t fazed at all and it wasn’t long before we were on the road, Andy grinning like a Cheshire cat at the upgrade! 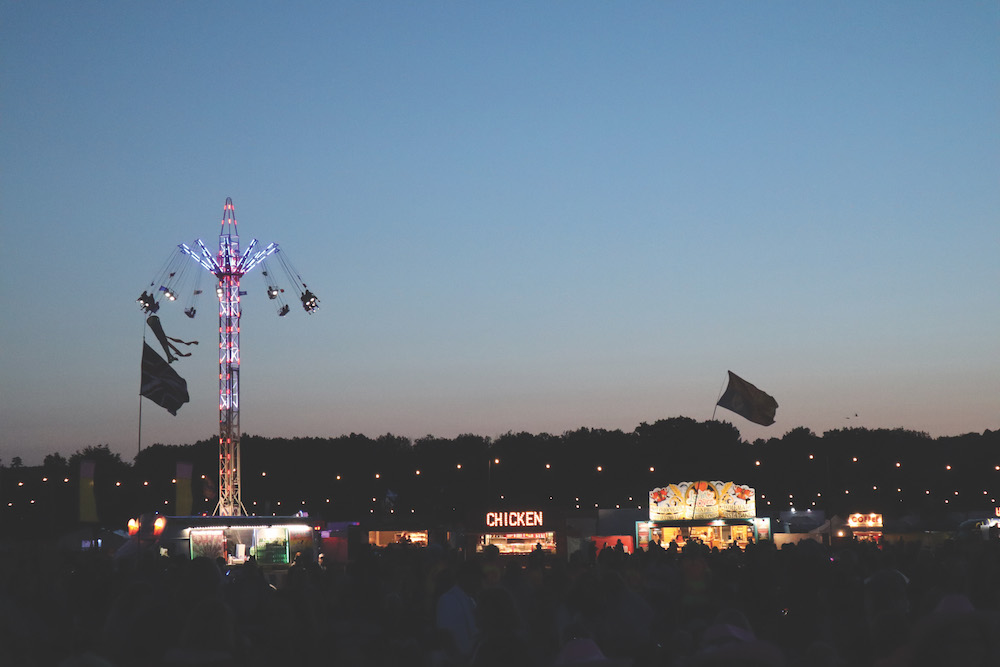 Dodging the rain we were soon pitched up with a beef chilli on the go and having a catch up with Mark and Ashley. The decision to go over to the festival on that evening to pick up wrist bands in the pouring rain was soon knocked on the head and we went to bed hoping the weather would improve. In it’s 10th year, Rewind celebrates bands and artists that had success in the 80s. They hold the festival in three locations - Perthshire, Scotland; Capesthorne Hall, Cheshire and, where we were, Temple Island Meadows, Henley-On-Thames. Joined by Lisa and Simon, the Saturday morning looked more promising and with a good breakfast in our bellies courtesy of Mark, we headed on over to catch the water taxi. It’s not obligatory to dress up, but many people do – on the Sunday morning we caught the taxi over with the Flintsones. Costumes at the festival ranged from members of Baywatch to Worzel Gumage and Aunt Sally and everything eighties in between, including ET (which made my day!) and a few outfits we couldn’t quite work out. With our festival pitch for the day set up, Andy, ever the joker produced some T-shirts for us to wear. Three of us had “If found drunk please return to Ashley” printed front and back, and the other “I’m Ashley” stated on it. They proved a great success with Ashley having everyone saying hello to her, and the people pitched up around us assisted the boys back if they looked lost trying to find their way back to their seats. We even had a famous weather lady ask to take our photo! The music soon got started and despite my lack of knowing some of the artists playing on the line-up, I was surprised at how much I actually recognised. The atmosphere was great, with us soon dancing along to the cacophony of music. Although the main focus is the music, it is a very family-friendly festival with something for everyone. Along with a fun fair there is a dedicated kids zone with circus workshops and a disco. If there is a break in the bands on the main stage, there is a couple of other stages to check out, some comedy or the silent disco to have a boogie to. The weather was very kind to us and we only had a couple of showers to dodge over the two days. It’s a very relaxed festival and on the Sunday we found ourselves bumping into people we had met and got talking to on the previous day. By the time Sister Sledge were playing on Sunday we were sharing glow paint and glow sticks with our neighbours. Mark and Ashley are old hands at this festival (sorry about the ‘old’, guys) with this now being their ninth year attending. So they were well versed in getting away a little early to miss the queues at the water taxi. We enquired on the Sunday morning what time the last taxi came in, to be told 1am, so it was definitely worth getting off that bit earlier, and Mark soon had hot dogs and burgers on the BBQ for a late evening snack. 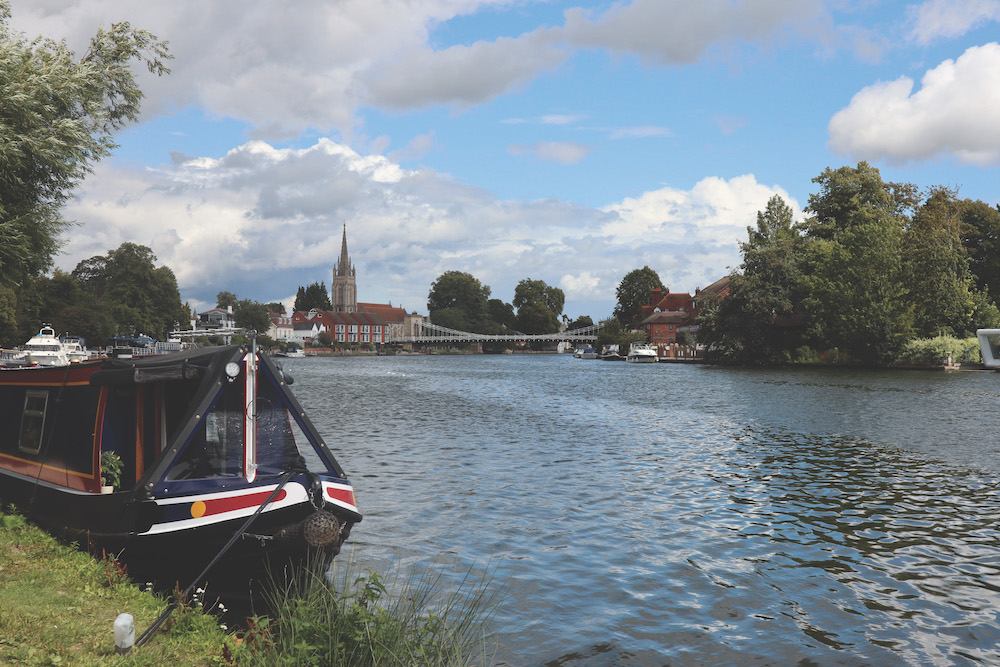 After two days of singing and dancing, Monday was a very leisurely affair. My dad who lives nearby popped over for a spot of breakfast before heading off for work, and we decided what to do with the rest of our day. We debated walking into Henley-on-Thames, which is around a 10 minute stroll but having done this before opted to take a bus trip into Marlow. You can catch the bus right outside the campsite and it’s about a half hour trip, only costing £4 return each. Marlow is a lovely town to have a wander around and is also located on the banks of the Thames. So after a stroll down the high street we watched the canoes from the suspension bridge before heading for a gentle walk along the river, giving the large houses on the other side a bit of an ogle and debating which one would do us if we won the lottery! After stretching our legs it was time to stop for a spot of lunch. We chose The Botanist, which was a lovely place to sit and relax and have a bite to eat, with a good mixture of dishes on the menu. Before long it was Tuesday morning and time to take our ’van back. We were sad to go and on the drive back to Bunk Campers were soon discussing when we might be able to hire another ’van and what our next adventure might be…

Bunk Campers has nine different options for hire, from a small two-berth campervan up to a six berth motorhome. We opted for the two-berth mid-sized campervan called the Aero, but got upgraded to the Aero Plus. This is a 6.74m ’van based on a Fiat with a 2.3l engine with six speed manual gear box and built in sat-nav. It proved easy to drive and, with the edition of the reversing camera, easy to manoeuvre once on site. The layout was ideal for the two of us with a large fixed bed in the back, gas hob and large fridge in the kitchen and enough room for four in the dinette.

My second time under a tin roof and I am starting to see the appeal. Sat relaxing, looking out across the open fields is a wonderful early morning or dusk pleasure. At this stage I really couldn’t devote the time away to justify buying our own campervan. This is where camper hire is such a great idea, and allows you dip in and try different variations before potential purchase, or simply for those long weekends away. Bunk Campers were a pleasure to deal with and the van itself easy to drive and manoeuvre once on site. It was nice to have the extra space compared to our previous campervanning experience, especially the added bonus of a bathroom to save those early morning trips across site when nature calls.

If you have finished reading this review, return to our 'Motorhome Hire Guide' for more advice and tips.