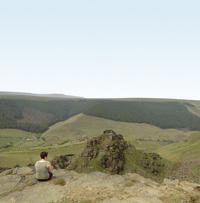 
Andrew likes to be active. I like a great view and good food. Finding somewhere that suited us both was the task for this weekend away in the motorhome. This article was originally printed in the April 2011 issue of MMM.

The Peak District immediately sprang to mind. It’s only a short drive away from our home in south Lincolnshire – although I’ve discovered that the most pleasant weekend destinations take about three hours to get to from Bourne.

One of Andrew’s favourite places is Edale. Unfortunately, the campsite there is for tents only, so we decided to pitch up in the motorhome further along the valley near Hope.

Hope itself, as we quickly found out, is a sleepy little village. The hikers’ café and one other are excellent in that they provide basic grub for a reasonable amount. If you want something a little later, or a little more exotic, there is a Chinese and a curry takeaway or a big brash pub offering the basics.

The village deli sells cheese and bread, and the obligatory Bakewell tart and the flower shop also sells vegetables. Anything else you could probably get from the excellent Spar, with friendly staff.

If you want a little more variety then head for Castleton. If you are a Caravan Club member, you could choose to stay on the (members only) site here as well.

WHAT CAN I DO?

This thriving little market town has plenty of shops as well as being the home to cavern mania. There is one cave (Peak Cavern) on the outskirts, which has good reports. You can also buy a joint ticket for this and the Speedwell Cavern, which it has to be said, is a little underwhelming. The boat ride is dramatic and the tour guide amusing (in possibly the cheesiest way).

Ben, our guide for the hour-long experience, told us a little about the history, and essentially that men were paid very little to bring out very little (this mine ended up turning out very small quantities of lead). The tunnels are kept artificially half submerged to allow visitors to travel along its length in boats, bumping along the sides quite gently – remember to keep your fingers in the boat.

So you get to the end and see the bottomless pit (which is 11m deep) and some very ambitious stalactites (they’re the ones that hang down). And why am telling you all this? Because this tour is a novelty but I certainly wouldn’t forgo a trip to the Blue John Cavern for this.

There’s actually plenty of parking at Speedwell though, and the views on good days over the Hope Valley are worth a walk or drive up here. You have to pay to park but there’s £1 off entry into the cavern with your parking ticket.

So, what if you want to head away from the crowds? Try a walk – there are plenty to choose from in the area, most involving some form of hill. We decided to try the reservoir at Ladybower. If you’re going to drive, arrival by about 9am is your best bet during the weekend as it gets very busy. We parked at Bridge End – a free car park with no height barriers.

The plan was to attempt a short half-day walk – planned by the ‘Action Man’. He explained that it was roughly a nine-mile walk, circular which involved a bit of a hill climb (but not much).

What he failed to tell me was that we had to climb to the top of the hill in the first half a mile. Steep hills first thing in the morning (and, to be fair, at any time of day, as my parents will attest) do not agree with my system. I should know to distrust a male route planner when it comes to walks. They were called Stothert miles when I was a child: if you took the actual length of a route and then halved it, this was the mileage we were told.

My dad was also quite famous amongst his friends for suggesting a 20-mile bike ride, but then, on further questioning, revealing that he’d rounded the distance down by ‘a fair bit’...

And what’s my point? Well, I’ve now discovered that Andrew has the same cavalier attitude to the mile as taken on foot...

However, after that early morning shock to my respiratory system, the walk was incredibly pleasant and fairly level. It offered up amazing views over to Mam Tor, Lose Hill and Snake Pass, as well as back to the Ladybower reservoir. The route took us to Rowlee pastures, where signs tell you to look out for short-eared owls, skylarks (heard squealing quite loudly while walking through this area) plus other birds.

They don’t highlight that if you carry onto Alport Castles – not a man-made structure but impressive craggy cliffs – you’ll find a camouflaged hide open to all for bird watching. And the birds in question are peregrine falcons. And suddenly the squealing skylark fighting off a much larger bird made sense: there was obviously a chick involved. The skylarks themselves are amazing creatures, throwing their tiny bodies into gusting winds, almost unmoving for short periods before diving down the hillside.

From the castles you can descend (very quickly) down into the valley below and Howden reservoir. This is the first of three reservoirs built to supply the growing populations of Sheffield and Manchester with water. The impressive dam structure arrests your eyes as you follow the road around the edge of the water.

There is a road right to the top of the Howden reservoir, which is closed (north of the visitor centre) to public vehicles at the weekend. It’s the domain of walkers, cyclists and the welcome bus that runs up and down the valley picking up and dropping off passengers at various points along the route. Handy if you’ve walked further than you meant to.

If you want to drive this route, then plan it during the week, but remember, parking and places to turn round get fewer the further up you go. But carry on walking and as you get closer to civilisation there are a few more info boards explaining who built the reservoir, how they lived and how each reservoir was created. It’s pretty intriguing stuff, especially when you find that the water companies tried to restrict the navvies’ intake of alcohol by building a bar, and the navvies’ reaction to lower drinking limits...

As previously mentioned, you’ve got pay and display parking at the cycle hire centre and a little snack bar selling sandwiches, paninis and hot and cold drinks. Stop here for refreshments, the toilets or just for a rest on the benches, before returning to the camper.

All in all then, a good weekend: I got my food fix and Andrew managed to get me to do some exercise. But it’s my choice of destination next time...