The ultimate guide to motorhoming on the Outer Hebrides 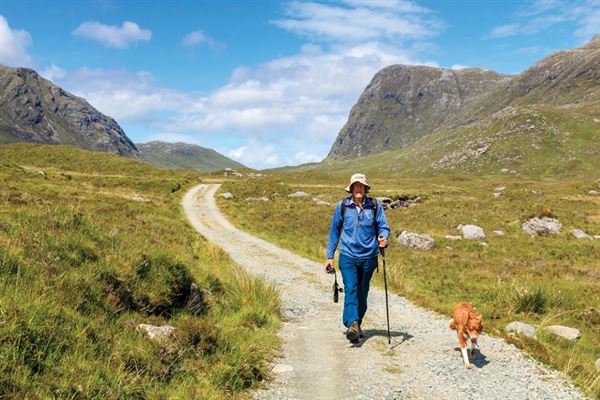 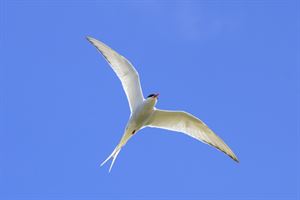 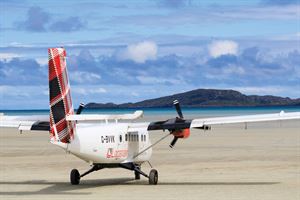 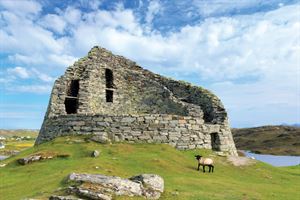 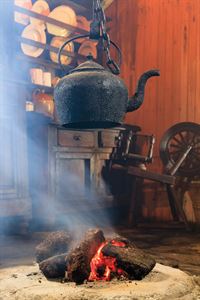 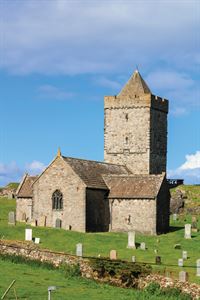 The Outer Hebrides is a wonderful location for a motorhome tour.

Blessed with a range of top-class beaches and blissfully remote islands, it's a haven for wildlife and boasts some of the best views you're ever likely to encounter in the UK.

If you're planning a motorhome or campervan trip to the Outer Hebrides, use our guide to help you make the most of your time there. 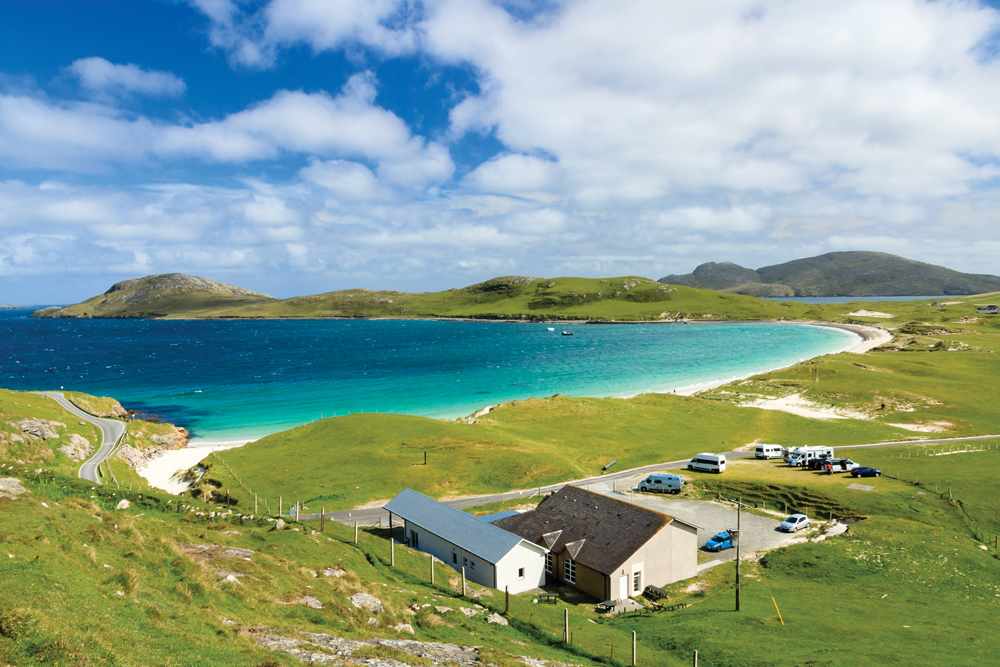 The southernmost inhabited island in the long chain of the Outer Hebrides, linked to Barra by a causeway.

Vatersay Hall is a modern community facility that sits on a narrow strip of green that forms the waist of the H-shaped island. Take advantage of the showers, toilets and café at the hall in exchange for a donation.

Walk upwards from the car park over ground speckled with pink lousewort and heath-spotted orchids to gain a beautiful panorama, which includes the Isle of Barra and Castlebay, where the ferry docks. The turquoise sea lapping golden sand and shading to aquamarine in the depths could be the Aegean, but the land is far too green.

Cropped short by a few grazing cattle, the green sward is machair – grassland naturally fertilised by the lime of shell sand. 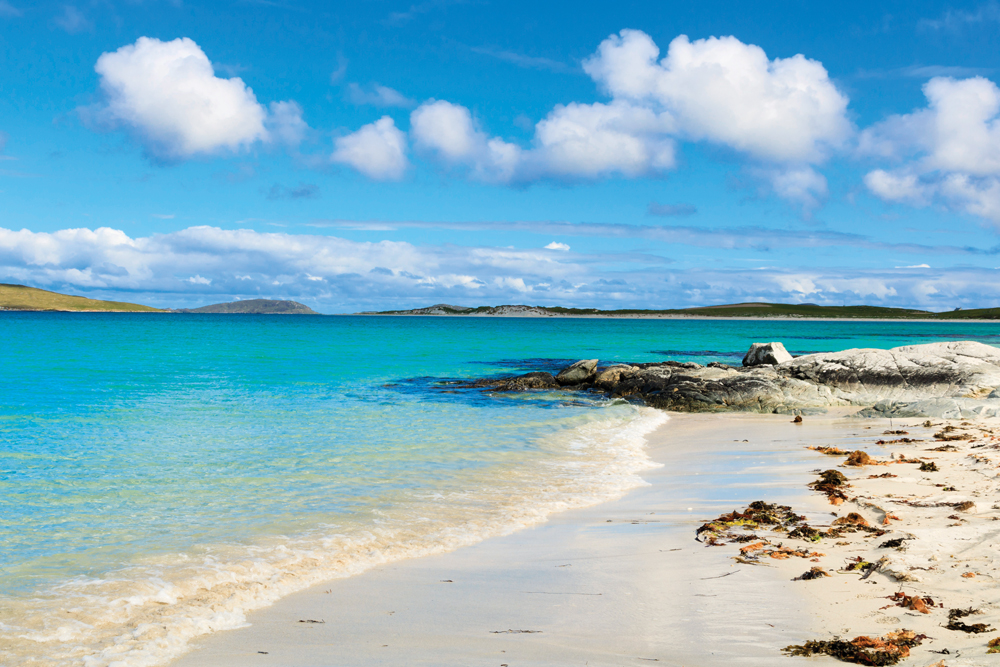 You can empty your toilet cassette at the chemical disposal point by CalMac’s office. This facility is available at many of the ferry terminals, listed in a leaflet for motorhomers visiting the islands.

In Castlebay, take a boat trip out to Kisimul Castle, which stands on a rock in the middle of the bay, before lunching on excellent curry in Café Kisimul. We’d also recommend stocking up your food supplies here.

Wavecrest Campsite, a flowery field beside a bay where seals bob and terns dive. Ronald, the owner, is very chatty when he calls after finishing his shift on the Eriskay ferry.

Wavecrest is on the edge of Borve, a typical crofting township that is a scatter of grey and white single-storey houses, spread across a green landscape like building bricks randomly scattered by a child’s hand.

Post and wire fences mark the long rectangles of individually-owned crofts, rising in parallel lines from the dunes up to the hills. The delicate machair and the rough hills of rock and peat are unfenced common grazing, where each crofter is allowed a certain number of livestock. No one makes a living from crofting, but it is a way of life. Most people have more than one job to make ends meet.

At low tide, the largest shell sand beach on Barra – Tràigh Mhòr – dazzles white in the sunshine. Wind socks flying at either end denote that it has become the runway for the island’s airport for an hour or two. The changeover of passengers and baggage is quickly accomplished, then the engines are restarted by hooking-up to a battery in a wheelbarrow. After the aircraft takes off, yellow-jacketed men remove the windsocks and the beach is open again.

At Eoligarry, in the north of Barra, walk up a hill behind the campsite for a fabulous view over uninhabited islands to Eriskay and South Uist. Also remember to pay a visit to ancient St Barr’s Church, where Compton Mackenzie, the author of Whisky Galore, is buried in the churchyard. 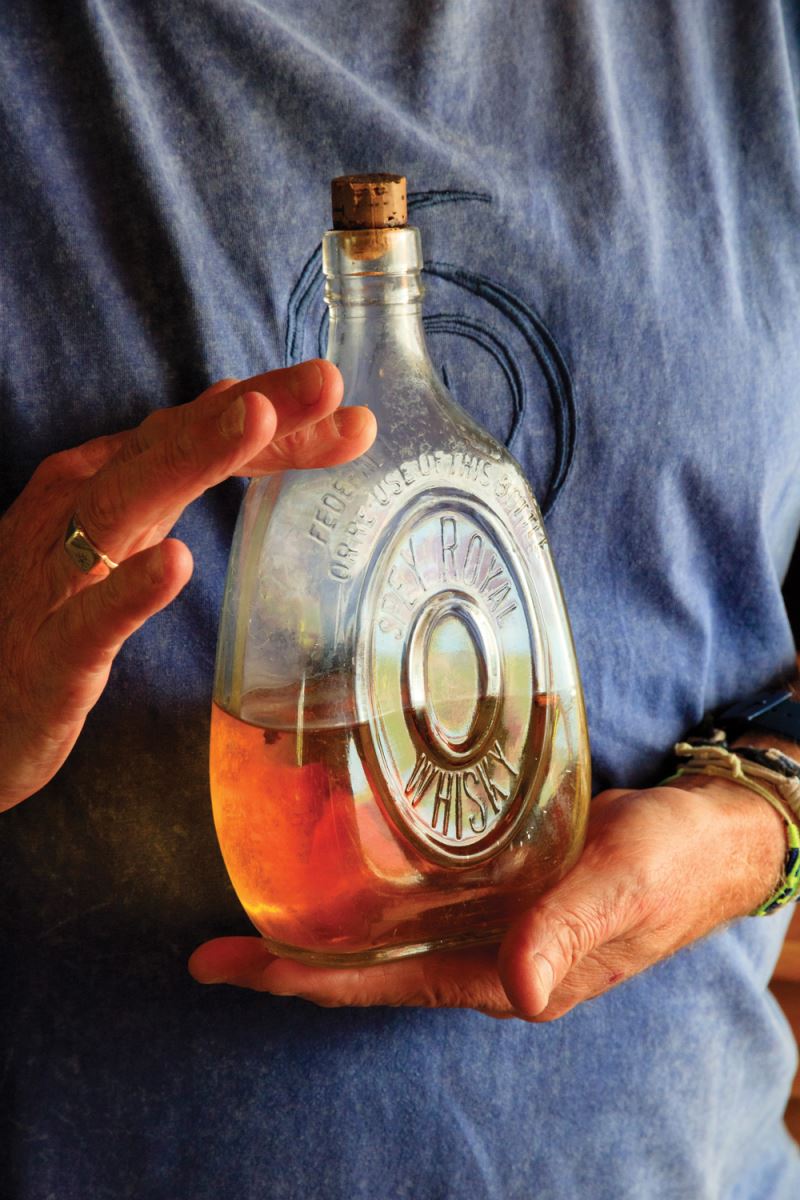 It’s a short ferry crossing to Eriskay from Barra. Eriskay is just the right size to be a fictional island. From the top of its high point, Beinn Sciathan, the eye can encompass its whole extent – rough headlands, white sand beaches and scattered houses.

The spine road up the islands was routed through here in 2002 – with a ferry pier in the south and causeway in the north.

Before that Eriskay was isolated and hard to reach – a half-forgotten place on the edge of imagination.

No wonder when the SS Politician ran aground it took a while for the authorities to react to stories of locals salvaging cases of whisky from the wreck.

The event offered Compton a rich vein of myth and reality around which to weave his novel.

From the hill’s summit you can make a direct descent to the village, eyes fixed on Eriskay’s pub, Am Politician. Its modern exterior belies the fact that behind the bar is an original bottle containing whisky from the shipwreck.

While you wait for lunch you can read information on the walls about the dramatic events that unfolded on a stormy night in February 1941. 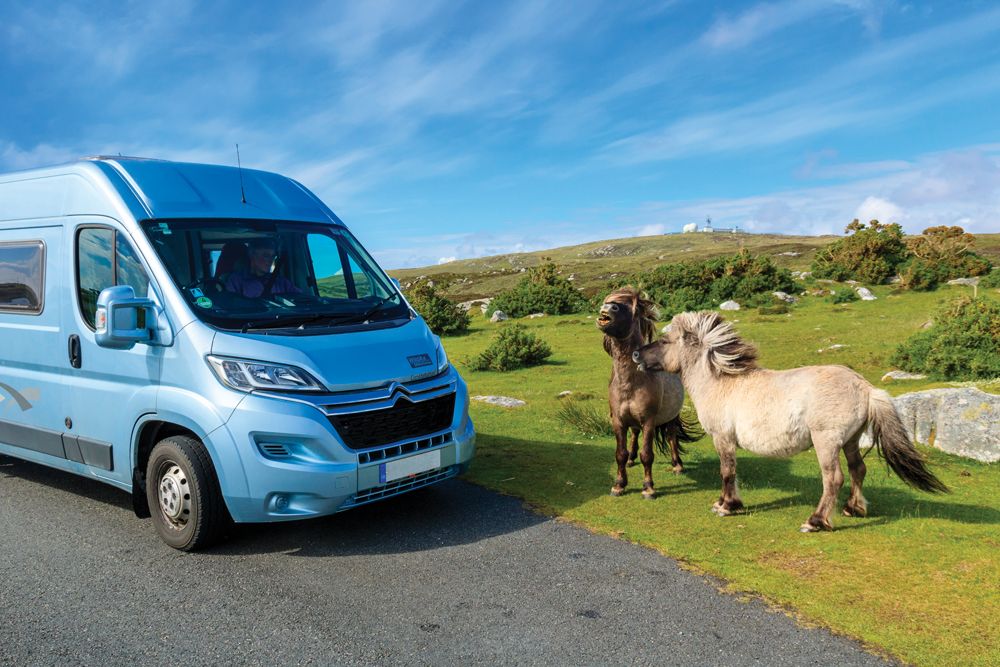 A long island with contrasting east and west coasts. In the centre, Kildonan Museum gives a fascinating insight into crofting, local crafts and many aspects of island life, as well as Prince Charlie’s travels around the Uists.

He landed on Eriskay in 1745 and returned in April 1746 after his unsuccessful campaign to reclaim the throne for the Stuarts. He dodged government troops for two months before escaping ‘over the sea to Skye’ with Flora Macdonald.

In the west, walk out to Orasaigh (Orosay), one of many tidal islands with the same name. At low tide, you can stroll across firm sand strewn with vivid pink and green seaweeds.

Smart ringed plover and black-chested dunlin poke for food around the wrack-covered rocks, while brown female eider ducks and their tiny fluffy chicks bob on the edge of the sea.

From the isle’s grassy twin summits, barely 100ft high, you can see for miles across the flat coastal plain to the rough dark hills guarding the east coast.

By contrast, the road past the RSPB reserve at Loch Druidibeg to Loch Sgioport, on the eastern seaboard, winds over rock-strewn moorland. The perfect place to spot birds of prey: hen harrier, kestrel, short-eared owl and distant eagle – as well as having close encounters with free-roaming Shetland ponies. 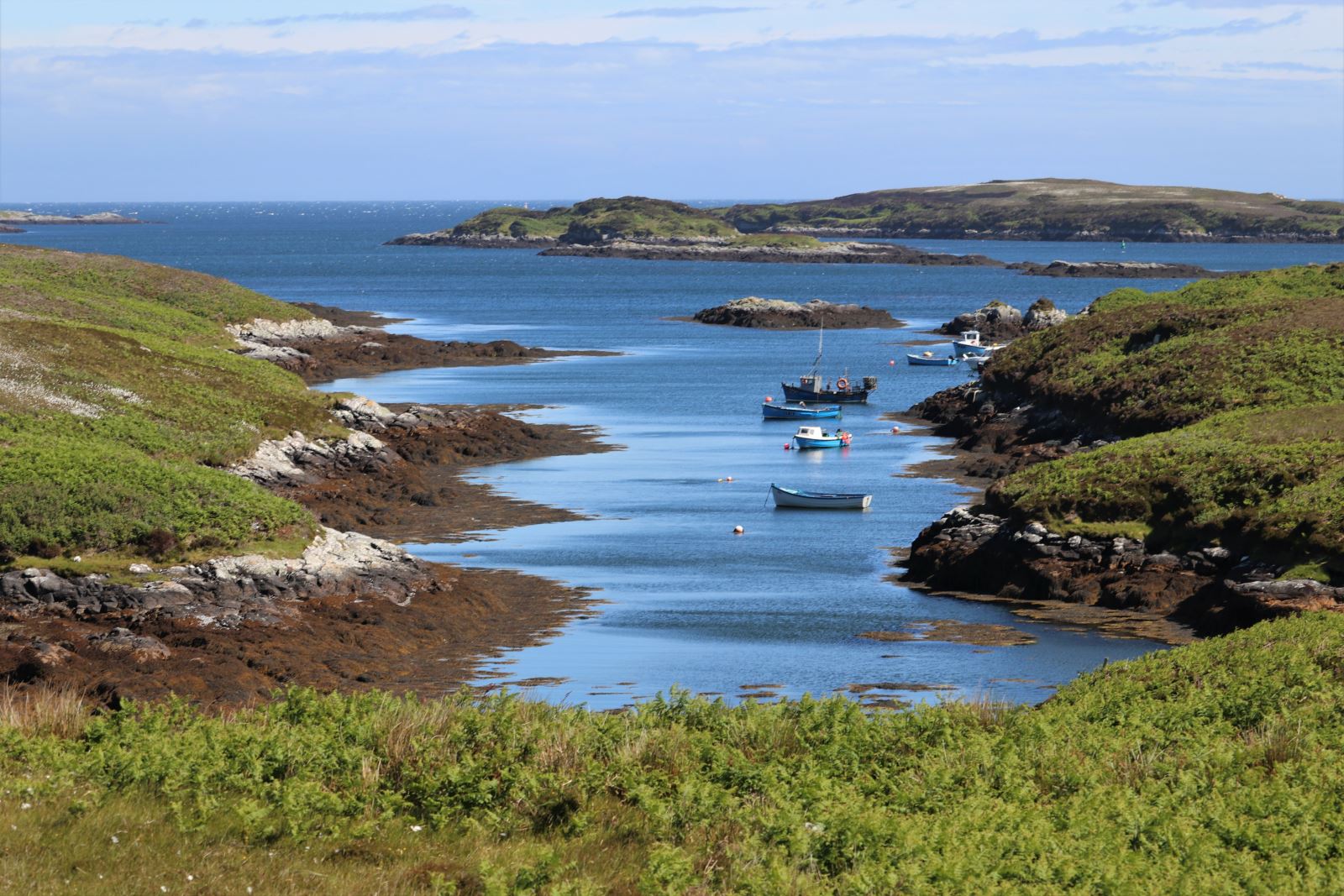 A causeway leads from South Uist onto the next island, Benbecula. The view from Ruabhal, its highest hill, displays a polka dot landscape of moorland and lochans stretches to a crumpled coastline sprinkled with islands.

It’s difficult to see where fresh water gives way to salt, except in the north where a great extent of wet sand between Benbecula and North Uist catches the light. The darker grey form of Skye sleeps on the eastern horizon. 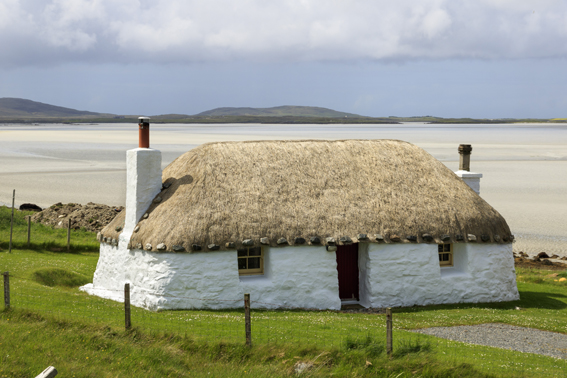 From Benbecula, another causeway carries you onto North Uist, where we’d suggest a stay at a peaceful campsite on Balranald RSPB reserve, where the birdlife can stray onto your pitch sometimes.

On the waymarked walk around the reserve, you’ll be able to get close views of oystercatcher, ringed plover, dunlin and arctic tern. Inland, there’s more hen harriers and a short-eared owl hunting.

Further north, try searching for the extremely rare Hebridean orchid (dactylorhiza ebudensis) that only grows on North Uist. It looks similar to the early and northern marsh orchids, on other islands in vast carpets, but has large, purple markings on its leaves.

To reach Harris and Lewis, two large islands that share the same land mass but are separated by mountains, drive onto Berneray for an hour’s ferry to Leverburgh. 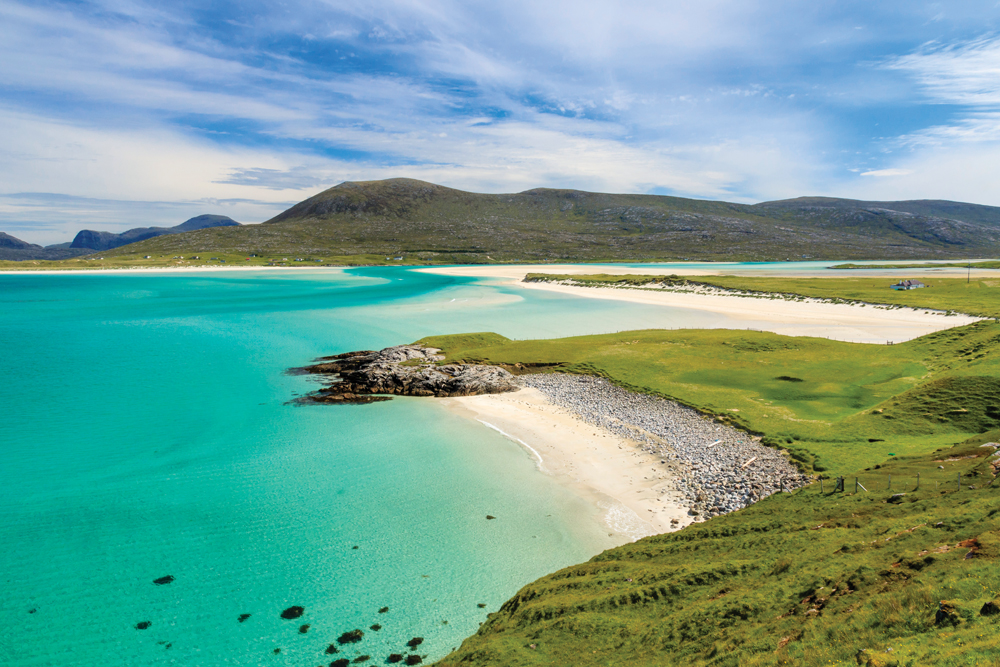 In the southeast, visit historic Rodel Church, which was built for the MacLeod chiefs in the 1500s. Further into the interior wander through a world of rock and bog, stepping between the flowers of insectivorous sundew and butterwort. It feels as if you are walking on the bare bones of the land as you follow a rib of stone that outcrops between water lily pools.

The west coast of Harris is totally different to the east, with vast beaches backed by dunes and flowery machair. Take your time to explore, starting with a spectacular walk at Northton, followed by coffee and cake at Temple Café and a visit to Seallam! Visitor Centre. The centre has fascinating genealogical and cultural interpretation, including an exhibition about St Kilda.

Many large estates on the islands are now in community ownership. Both West Harris and North Harris Trusts provid facilities for visiting motorhomes. There are several signed wild camping spots on the Luskentyre road and pitches at Seilebost School, where you may eb able to add frog orchids and numerous golden plover to your wildlife list.

Seilebost, Luskentyre and Hushinish all have world-famous beaches, where the retreating tide leaves behind acres of dazzling sand.

There’s a walk from Miabhag on the Hushinish road up an impressive valley to an eagle-watching hide, where you may spot a golden eagle circling before soaring down the valley. Sea eagles are also often seen here. The surrounding Harris hills look magnificent. 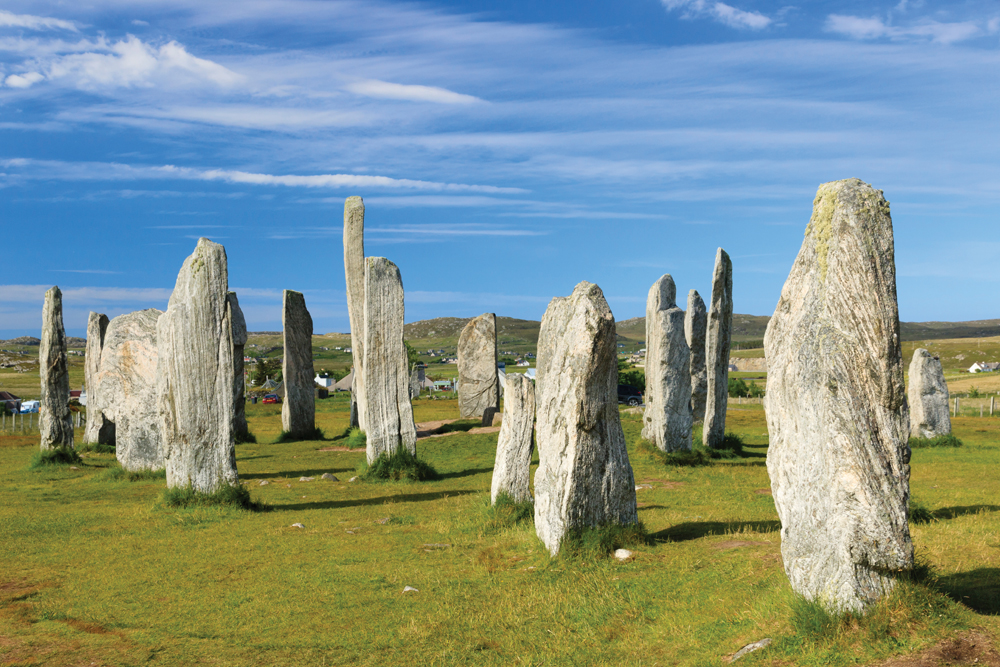 On the largest island in the group, visit Stornoway to resupply and have a quick look at Lews Castle, which was built for Sir James Matheson, who bought the whole of Lewis in 1844.

Head west and up the coast, visiting several tourist sites, starting with Callanish standing stones, Scotland’s equivalent of Stonehenge. Next comes the Iron Age fortress of Carloway Broch and a restored Norse mill and kiln.

Stop to explore Gearrannan Blackhouse Village and the Blackhouse at Arnol. So many eras of history, from prehistoric monuments to traditional homes, are preserved in the distinctive local stone. Lewisian gneiss, with its pink, white and grey swirly patterns, is one of the oldest rocks on the face of the earth.

Finally, we’d recommend a walk around the northernmost tip of Lewis from Ness. The distinctive smell of guano blows up over the clifftops, alerting you to a seabird colony before you gain a view down to white-streaked ledges, crowded with tiers of guillemot and kittiwakes.

The cliffs grow higher and the sea wilder as you approach the apex of your journey – the Butt of Lewis lighthouse. Here, on the brink of the vast Atlantic Ocean, reflect on our journey to what seems like it could be the edge of the world.

What you need to know about the Outer Hebrides