Motorhome travel: On the trail of Bonnie Prince Charlie, from Scotland to England 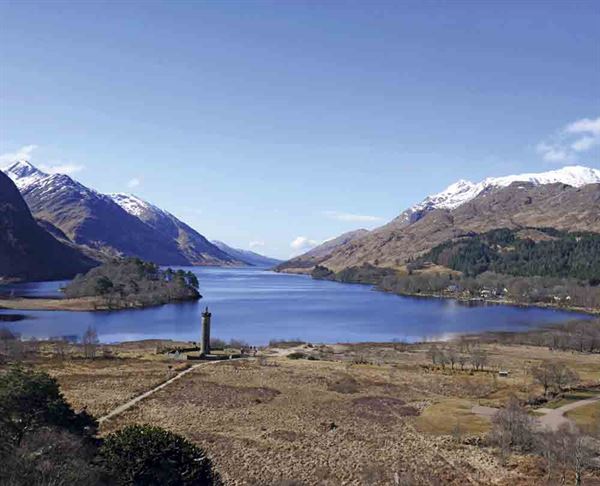 Words and photos by Carol Kubicki

Scotland sparkled in the sunshine while seals bathed in the sheltered sea loch as I stood at the spot where Bonnie Prince Charlie arrived on the Scottish mainland on 23 July, 1745; I knew this was a memorable moment.

The Prince’s Cairn marks the rocky promontory on the beautiful Loch nan Uamh, near Arisaig, where Charlie landed, saying, “I am come home.”

Driven by the conviction that his father, James Stuart, was the rightful king, Charlie hoped the Scottish clans would gather to raise a Jacobite rebellion (from Jacobus, the Latin for James) against the Hanoverian King George II.

Few journeys are packed with more romance and misadventure than that of the dashing and charismatic 24-year-old Prince Charles Edward Stuart. His bid for the throne is a story of dreams and defeat. I wanted to follow his footsteps to understand the man and his odyssey.

Over five months Charlie led the Jacobite army towards London. It was this hopeful journey south that I wanted to explore in a fortnight-long trip. 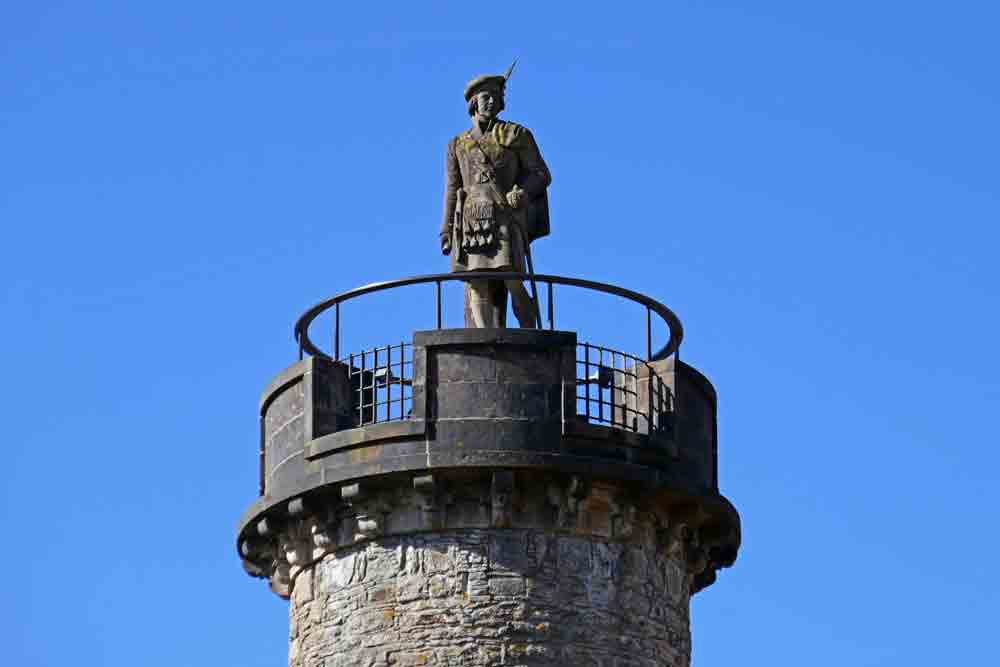 Charlie instructed the clans to gather at nearby Glenfinnan on 19 August, 1745. By early evening, a Jacobite army of 1,200 clansmen had gathered. William Murray of Blair Castle raised the standard, declared war on the King and the soldiers threw their bonnets in the air.

By the time the Jacobites left Glenfinnan they were 3,000 strong and a reward of £30,000 was on Charlie’s head.

We parked the campervan at the Glenfinnan Monument and showed our tickets to the National Trust guide who told us, “Ninety per cent of visitors are here for Harry Potter.” He was thrilled that we were there for the ’45. I squeezed out of the hatch onto the monument’s airy narrow walkway and enjoyed the stunning views over Loch Shiel and the viaduct that attracts ‘Potterites’. 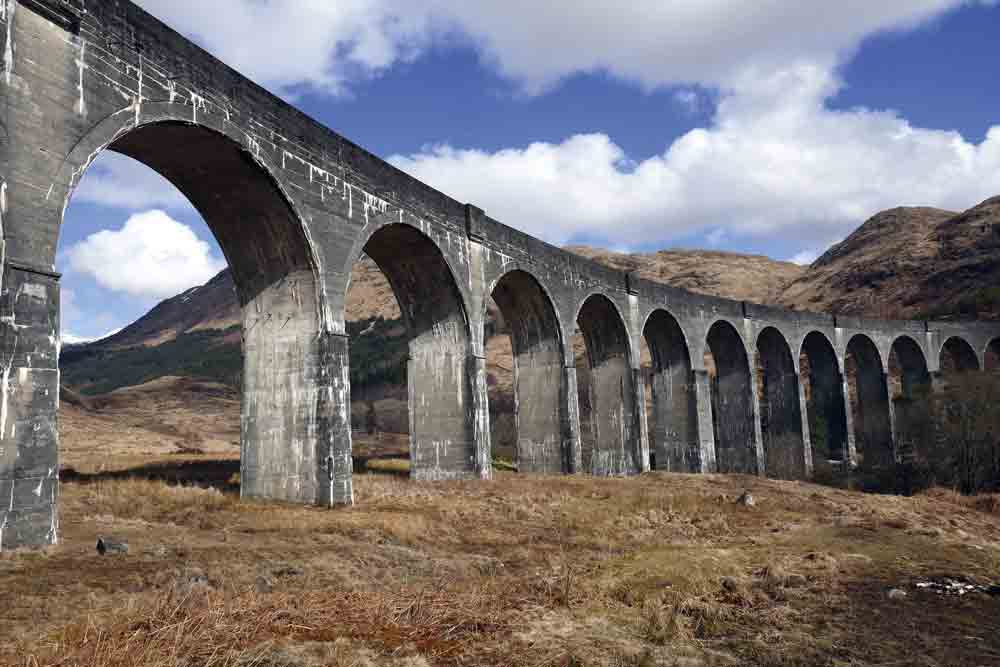 Fort William’s West Highland Museum has fragments of tartan plaid reputedly worn by Charlie and an intriguing ‘secret’ portrait. This distorted image on a tray becomes an image of Charlie when reflected in a goblet, allowing supporters to toast him discreetly. Both this museum and the charming Clan Cameron Museum at Achnacarry have examples of Charlie’s exquisite embroidered waistcoats.

From Achnacarry we played Pooh sticks over the bridge at Witches’ Pool before driving up to the Commando Memorial. After earlier Jacobite rebellions, General Wade supervised road building in the Highlands from 1725 to expedite troop deployment. Ironically, these roads proved valuable to the Jacobite army. We traced their footsteps along Wade’s Road to Highbridge, where a towering three-arched bridge spanned the craggy gorge.

The Jacobites climbed Wade’s Road over the Corrieyairack Pass from Fort Augustus; this remote track, now closed to vehicles, once continued to Ruthven Barracks.

I’ve long wanted to cross the Corrieyairack Pass and planned to complete it in the opposite direction to the Jacobites. The surfaced road ends just beyond Wade’s handsome Garva Bridge and we booked a dawn taxi to here from our campsite.

Ahead of us were 18 miles of remote track, climbing to a height of 2,526ft. As we set off the sun cleared and the mountains and the warmth and solitude were bliss. Only red deer, mountain hares and Wade’s stone bridges punctuated our route.

We soon reached the snowline and struggled through deep drifts in a winter wonderland, blown away by the breathtaking panorama of snow-capped peaks. Descending, the view along the expanse of Loch Ness signalled our return to the throng. A bus and train took us to Newtonmore leaving three miles of dusk walking back to our Devon Tempest. It had been a demanding and exhilarating day. 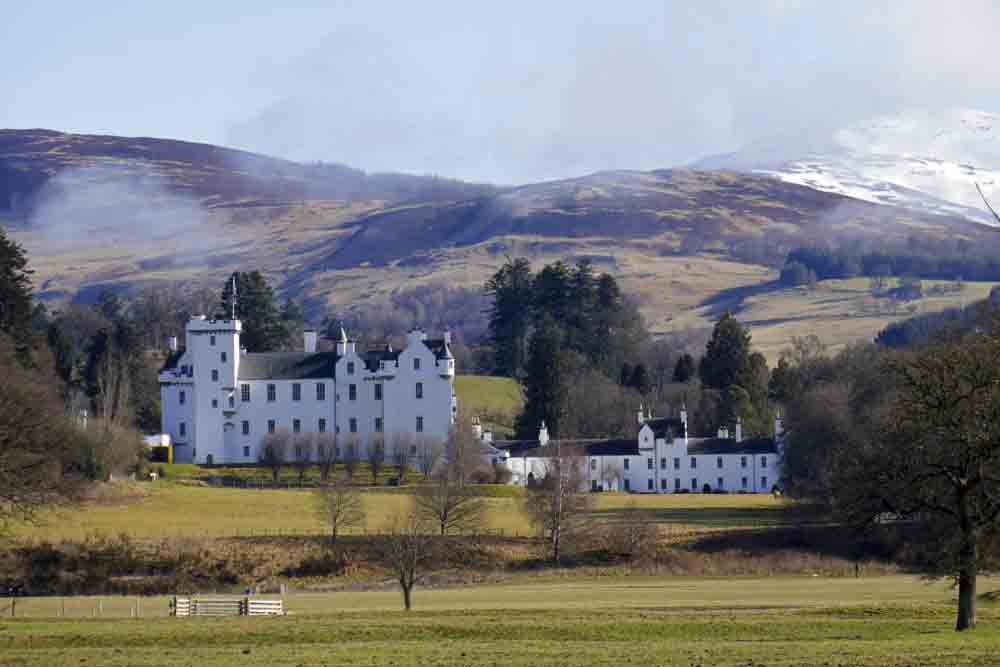 After the rigours of the pass we needed rest and Blair Castle, the ancestral home of the Dukes of Atholl, was ideal. The incumbent Duke of Atholl supported the Hanoverians and fled the castle as the Jacobites approached, allowing his brother, William, who raised the standard at Glenfinnan, to take possession of the family home. This family remained divided and fought on both sides at Culloden eight months later.

From Old Blair’s ruined church we took a gentle walk along the gorgeous Glen Tilt. Red squirrels scampered above us and coal tits chirped in hedges. At a viewpoint over the remote glen we sat on a bench, resting in the silence.

The Jacobite’s route followed the modern A9 south and they arrived triumphantly in Perth to gather support and funds. Charlie visited Scone Palace, home of Jacobite supporters and packed with symbolism; monarchs were crowned in this ancient Scottish capital until Charles II in 1651.

A tale of two Palaces

On the approach to Edinburgh, Charlie visited two palaces. Linlithgow Palace, the birthplace of Mary Queen of Scots, is today a substantial and picturesque lochside ruin.

In contrast, the Palace of Holyroodhouse remains the Edinburgh royal residence and is crammed with ornate ceilings and faded tapestries that helped me visualise how Linlithgow would have looked in its heyday.

As I explored all of Linlithgow’s wide winding staircases (built for full gowns), the grand statement this palace made was obvious. A member of staff, delighted to hear about our journey following Charlie, told us the palace has 118 fireplaces and 700 windows.

The army marched jubilantly to Edinburgh in mid-September and Charlie stayed at Holyroodhouse for six weeks, acquiring the nickname, Bonnie Prince Charlie, and posing for portraits. Victory at the nearby Battle of Prestonpans raised morale and, as the crowds cheered and drums played, Charlie must have felt the crown was within reach.

In London, Parliament was recalled and troops mobilised.

Marching across Scottish borders to England

Many loyal Jacobites advised consolidating in Edinburgh before continuing, but Charlie was determined to win the throne for his father and persuaded the clan chiefs to continue south through England’s northwest where Jacobite support was strong. The army crossed the Scottish Borders, stopping at Dalkeith Palace and Thirlestane Castle.

We traced their route on a damp foggy day. The weather cleared as we reached Carlisle to see its magnificent castle before warming up in Tullie House Museum and Art Gallery, where the display about the Jacobite offensive tells the story of Carlisle’s proud resistance over several days. A Jacobite army of 4,500 soldiers and 500 cavalry marched through Penrith.

The sun returned for our tour of the spectacular ruins and, from the Western Terrace, we had views of the Lake District fells dusted with snow. We spotted roe deer in the woods and found a fantastic children’s play area. With no youngsters in sight on this chilly mid-week morning we played at being soldiers in the huge wooden castle.

We drove the short distance to Shap Abbey, already a ruin in 1745. In the lovely riverside setting the remaining tower rises over an outline of the once monumental abbey. 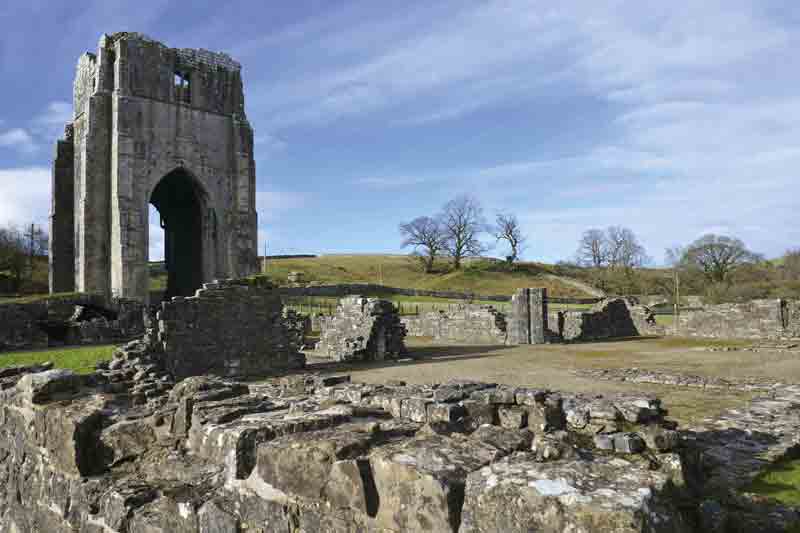 While we enjoyed a cold spring day, the Jacobites were here in late November, encountering snow over Shap. Without the M6, the army became strung-out over this inhospitable landscape.

The Lancashire plain must have been a relief to the rebels and, reaching Preston, they received an encouraging welcome with cheering crowds and bells. A ball was held in Charlie’s honour at The Bull and Royal, attended by local Jacobite families.

Preston’s part in the Jacobite rebellion

Preston is proud of its impressive Flag Square, overlooked by the neo-classical Harris Museum. I found the story of Preston’s part in the Jacobite rebellion and a collection of Jacobite tall-stemmed drinking glasses that were used for enthusiastic toasting.

The Jacobites made good progress through Manchester and south through Stockport – and we followed.

The reception became frosty as the Jacobites left the northwest. In Macclesfield people turned their backs as the soldiers went through the streets. The people of Leek were appalled when the army sharpened their swords on the parish church’s gravestones.

The story of the Jacobite army is generally one of good discipline. However, weary and a long way from home, insubordination increased and fear flourished.

In Mayfield, near Ashbourne, soldiers shot two local men and the terrified villagers barricaded themselves in the church while soldiers fired at the door. I wondered if hope was turning to hostility as I traced the musket ball holes on the wooden door with my fingers.

We hiked some of the way marked Bonnie Prince Charlie’s Walk from Ashbourne to Derby. After a pub lunch in the postcard-pretty village of Osmaston, we followed tracks by the pond and into the woodland of Osmaston Park to Shirley.

Although much of medieval Derby has been demolished, a few gems remain that the Jacobites would have seen when they entered the city in ‘tolerable order’ in December, 1745 to the playing of bagpipes.

Dressed in dirty plaids, some wearing no shoes, the Jacobites commanded pity rather than fear.

Near the River Derwent I found the half-timbered Dolphin Inn and St Mary’s Chapel, a rare medieval bridge chapel. Derby has the only statue to Charlie by the cathedral; the prince sits high on a horse looking young and proud.

In the Derby Museum and Art Gallery, I headed straight for the Bonnie Prince Charlie exhibition. In a mock-up of the room in Exeter House that Charlie stayed in, I imagined him sitting at a table writing a letter.

Learning that government troops were approaching and the defence of London mobilised, with insufficient support, no sign of French reinforcements and the risk of becoming surrounded, his commanders advised a retreat.

In that room on 6 December, the Jacobite ‘black Friday’, Charlie made the difficult decision to return north and he vents his frustration and despair, vowing to take his own counsel in future.

After travelling 500 miles it was in this museum that I truly glimpsed Charlie’s motivation.

That evening we toasted Charlie, a rebel with a cause, with the only suitable drink. Before he left Scotland Charlie gave the recipe for his personal liqueur, the honey-sweet Drambuie, to the MacKinnon clan, in gratitude for their help.

For that and his romantic journey, I say thank you!

If you enjoyed reading this, every issue of MMM is full of inspiring travel features. To buy back issue digital copies of the magazine, click here. This feature was originally published in the May 2019 issue of MMM.