Motorhome travel: A weekend in Dundee 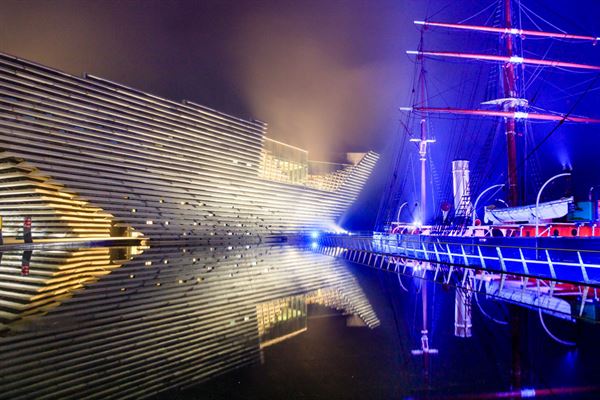 Dundee is the UK’s first City of Design, despite having been considered one of Scotland’s less glamorous cities in the past.

We’ve been wanting to visit the V&A Dundee design museum so, with an unseasonably warm spell making us restless to be away in our motorhome, this seems like the perfect time for a city break and a good dose of culture.

Dundee’s engineers and designers have been pioneers in everything from textile mills and shipbuilding to – more recently – comics and computer games. Situated at the mouth of the Firth of Tay, where the estuary broadens out to the North Sea, it’s a fairly compact city.

Arriving mid-morning on a Friday, we stop at the Bridgeview Station on Riverside Drive for a delicious and very reasonably priced brunch of food that is sourced locally. Our view stretches across the Tay to Fife, with the nearby Tay Rail Bridge curving across the water like a giant millipede.

We walk along the promenade into the centre, passing information about the Tay Bridge Disaster. On a stormy winter’s night in 1879 the first rail bridge built here collapsed with the Edinburgh train on it, taking everyone to the bottom.

Beyond the Discovery Point, where Robert Scott’s Antarctic exploration ship RRS Discovery is moored, we see the V&A. The exterior is clad in horizontal lines of concrete ‘planks’, reminiscent of the hull of a boat, with the building jutting out over the Tay like the bow.

A large shallow pool between it and the three-masted Discovery reflects both beautifully. It is part of a major redevelopment of the waterfront, to make it a more attractive place and to reconnect it to the adjacent city centre.

Inside, the V&A is teeming with people – apparently 300,000 visited in the first three months it was open. The interior walls are covered in irregularly angled rectangles of wood that look like ruffled scales. There are only a few horizontal window slits, so we visit a balcony that looks south over the Tay.

Entry to the V&A and the large permanent exhibition of Scottish Design – textiles, cast iron work, furniture, architecture and much more – is free. Payment is only for the special exhibition, which changes every few months.

In the Discovery centre, we follow a maze-like route along which I become engrossed in the exhibition about the British National Antarctic Expedition from 1901-04, which was the first detailed scientific study of the continent and about subsequent explorations using the ship moored here. So little was known about the region that it was like planning a trip to the moon.

Although iron ships had become the norm by then, the RRS Discovery was built with a three-layered wooden hull that could flex without cracking and would withstand the pressure of being ice-bound over the winter.

The deprivations of living in the Antarctic for three years, with no resupply of essentials, comes home to me when I explore on board. The cramped mess table and shared bunk areas for the crew contrasts starkly with the elegant officer’s ward room surrounded by small private cabins for each officer.

There are no campsites in Dundee and no overnighting allowed in the council’s car parks. If you stay in a campsite in Angus (the region that surrounds Dundee), Fife (to the south) or Perthshire (to the west), you can easily travel into the city by bus or train.

We move around and spend one night wild camping beside the beach on Marine Drive in nearby Monifieth (there are parking bays with no restrictions), one night at a Brit Stop and one on a five-pitch Caravan and Motorhome Club certificated location at Errol, midway between Perth and Dundee.

This site, Fernlea, has a bus stop at the entrance and two services an hour into Dundee, plus the added interest of varied breeds of ducks and chickens kept by the owner.

On Saturday we start by exploring Broughty Ferry, Dundee’s seaside town, which lies four miles east of the city centre. From the sandy beach, I can see Tentsmuir National Nature Reserve across the water and Barry Buddon (also known as Buddon Ness) lighthouse in the east. There is the occasional boom from the military firing range in the dunes there. 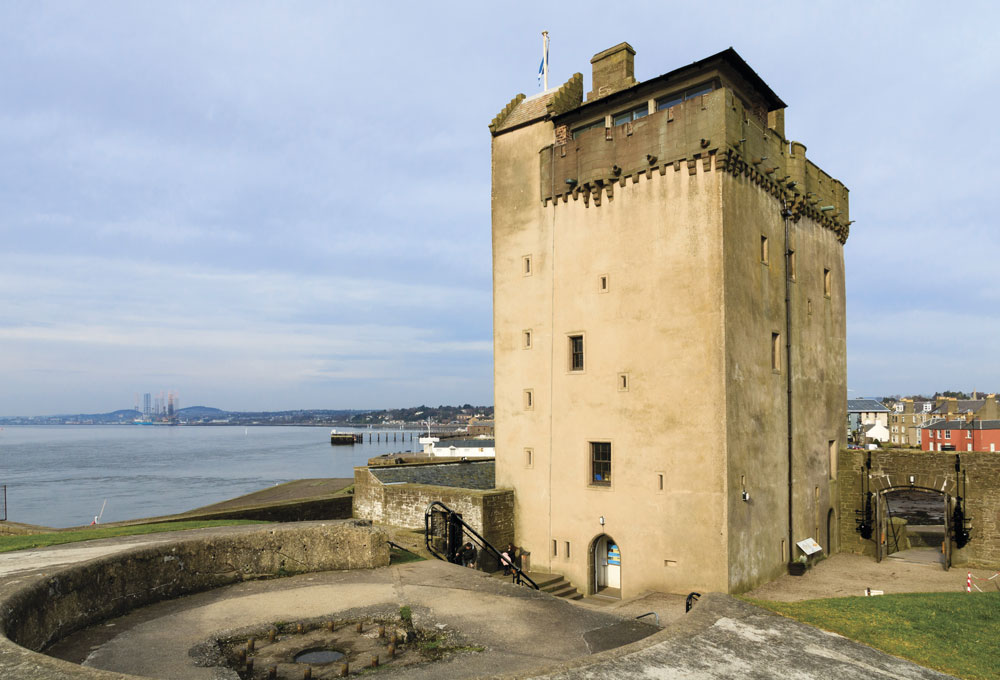 Broughty Castle is a museum with free entry and galleries on four floors. It goes back to the mid fifteenth century.

By the end of the eighteenth century it was a ruin, but it was acquired in 1846 by the Edinburgh and Northern Railway Company, which constructed the adjacent harbour. The company created an innovative railway ferry across the Tay, which predated the first ill-fated Tay Rail Bridge and ran again for a period after the bridge disaster.

Back in Dundee we visit the dock area where the HMS Unicorn is moored. Having been built as a fast, agile, frigate in 1824, she is one of the six oldest surviving ships in the world. She had a groundbreaking design, where a wooden hull was combined with cast iron braces to provide strength while taking up less space on board. Their use saved 200 oak trees!

We explore four levels of deck, with the bottom one requiring a Quasimodo-like shuffle because the ceiling beams are so low. Built shortly after the Napoleonic wars, the ship was not needed so was put into reserve with a roof built over her upper deck. This preserved the timbers, so she is now the world’s last intact warship from the days of sail.

In 1873 she was brought to Dundee to serve as a navy training ship. Officers had private bunks, but ordinary seamen slept in hammocks strung just 18 inches apart.

Heading uphill from the centre, we then explore two of Dundee’s hills. 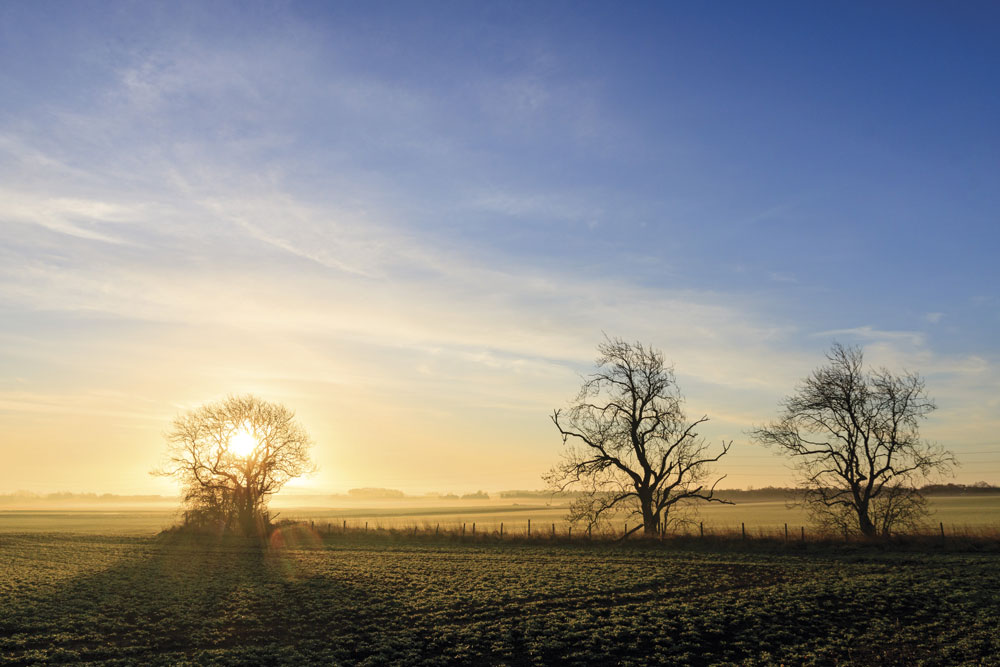 First is Balgay Park, which is crowned by the Mills Observatory, Britain’s first purpose-built public observatory. Dating from 1935, the sandstone building has a papier-mâché dome. Entry is free and, on weekday evenings, there are talks and star-watching.

We finish the day on Dundee’s highest point, the Law, parking in a circle just before the road narrows for the final climb. After a sunny start, it’s turned windy and grey. From the war memorial at the top there is a wide panorama of Dundee and the two bridges across the Tay, but in this light the view is monochrome

On Sunday we enjoy another tasty brunch, this time in The Speckled Hen farm shop and café at Tealing, just north of Dundee. We fill up with LPG at the Shell station by the junction of the A90 and Kingsway then drive back into the centre to visit the Verdant Works. One of the city’s many jute mills, it has been turned into an award-wining museum.

The free car park is behind the buildings and, as advised, I park overhanging another space, making sure they are ones marked by red Vs. At the ticket desk, we write our registration number in a log book.

The jute industry was key to Dundee’s growth as a city and port and its profitability led to dozens of mills being built in the 1800s. The ship-building industry grew alongside it as a large fleet of clippers was needed to transport the raw material from the Indian subcontinent.

At its peak in the 1870s, some 6,000 men and boys were employed in the docks. Jute processing also gave a boost to the whaling industry, since whale oil was used to soften the fibres before spinning and weaving them into textiles. The series of machines needed for each stage of the processing are well interpreted and are still run on occasion.

We are both amazed and moved by what we learn. The mills mainly employed women and children as they could be paid lower wages than men. Living conditions and diet were very poor, with long working hours in noisy and dusty factories. At one time, life expectancy for men was 33 years in the city compared to 60 in nearby rural Glamis.

Later we go to Dundee Contemporary Arts (DCA) to see a film. The vibrant bar is full of young people, reflecting Dundee’s status as a university town. The exhibition space on the upstairs floor has two modern art installations. Nearby are the Dundee Rep Theatre and the McManus gallery, so there’s plenty more culture we don’t have time to touch on.

On leaving the film, we find an east coast ‘haar’ (sea fog) has rolled in up the Tay. Many buildings are illuminated and those on the waterfront look particularly attractive, with the fog giving their lights an ethereal glow. It’s a lovely image to keep in our minds as we drive off for our last night before returning home.

I have always known Dundee as being famous for ‘jam, jute and journalism’, the latter because it is home to DC Thomson, the publisher of newspapers, magazines and comics such as Beano. But this visit has opened my eyes to other aspects of its history and made me realise what a dynamic modern city it is now.

If you are visiting both attractions, it is cheaper to buy a combined ticket for the Discovery Point and Verdant Works. It allows you to return as many times as you like over the next year.

The Dundee to Aberdeen railway runs close to the coast and has several bridges too low for motorhomes. In Broughty Ferry it’s best to cross the line at the level crossing by the railway station. In Monifieth, use the eastern access to the loop of Marine Drive, as this has 10ft 6in (3.2m) clearance

The campsite in Dundee

How long did we stay?
Three nights

When did we go?
February, but suitable at any time as historic and arts attractions in the city are open all year