Motorhome travel: A weekend in Ashbourne 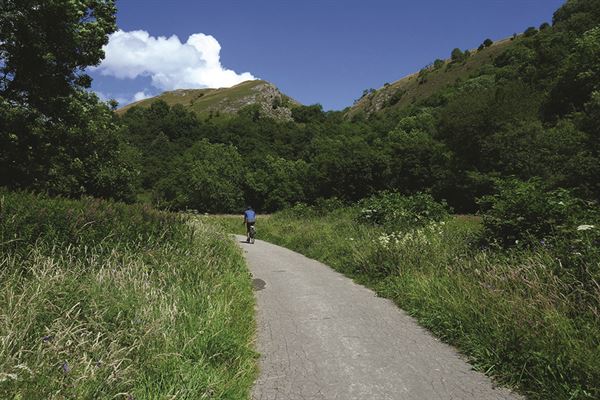 Warm summery weather brings out the cyclist in me, so I began searching for a campsite near some traffic-free routes. The Sustrans online map showed a good network of off-road cycling north of the market town of Ashbourne in Derbyshire. The nearby Carsington Water Caravan and Motorhome Club site had a pitch – so we loaded up the bikes and were off.

Back in the eighteenth century, six coach roads met in Ashbourne and all this passing traffic bought trade and wealth, so it’s no surprise that Ashbourne has many exceptional buildings. The list of people who have visited this small town on the edge of the Peak District National Park is a bit of a Who’s Who: Bonnie Prince Charlie, Samuel Johnson, George Eliot, Queen Victoria (when a princess)... 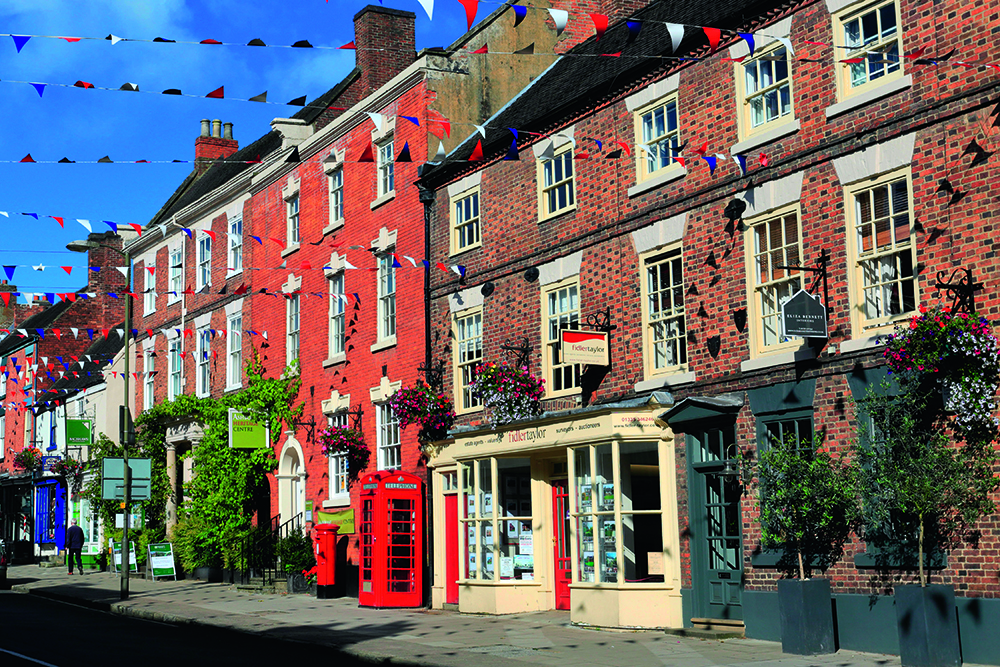 At St Oswald’s Church I paused to admire the ghoulish entrance, as each gate pillar has four carved stone skulls holding up a conical capstone. The beautiful painted ceiling of this 700-year-old church is well worth getting a crick in the neck for. In the shadowy Boothby Chapel the rows of recumbent effigies are as unsettling as the skulls at the gates. The tomb of Penelope Boothby, who died aged just five years old in 1791, is poignant and the white marble effigy of the young Penelope is exquisite.

Leaving the melancholy atmosphere of tombs, we drove towards the nearby village of Fenny Bentley for lunch at the Bentley Brook Inn. Had we arrived in mid-August the pub would have been a hectic centre of sporting excellence; it’s the venue for the annual World Toe Wrestling Championship.

By early afternoon we were pitched at the Carsington Water site, a 10-minute walk from the reservoir. Carsington Water is a popular place for walking, cycling, watersports, fishing and birdwatching. We had plenty of time to leisurely cycle the eight-mile circuit of the reservoir. I had been expecting a flat route, but the gravel path is a roller coaster of ups and downs. It’s never tedious, as the irregular shape of the reservoir gives ever-changing views.

We cycled around the descriptively named Fish Tail Creek and through the woodland on the eastern shore and, at the northern end, detoured to explore the pretty villages of Hopton and Carsington. Hopton Hall has a splendid rose garden that is open on some summer days, but this wasn’t one of them. Returning to the reservoir we stopped in a bird hide and watched ringed plover, egret, lapwing, goldeneye and other wildfowl.

The paths get busier near Carsington’s visitor centre, where there are shops, cafés, an interactive exhibition about water and an activity centre where you can hire equipment for watersports and cycling. We ate cakes whilst sitting on the veranda watching paddle boarders and young people messing about on oil drum rafts before walking out to Stones ‘Island’ for the view. 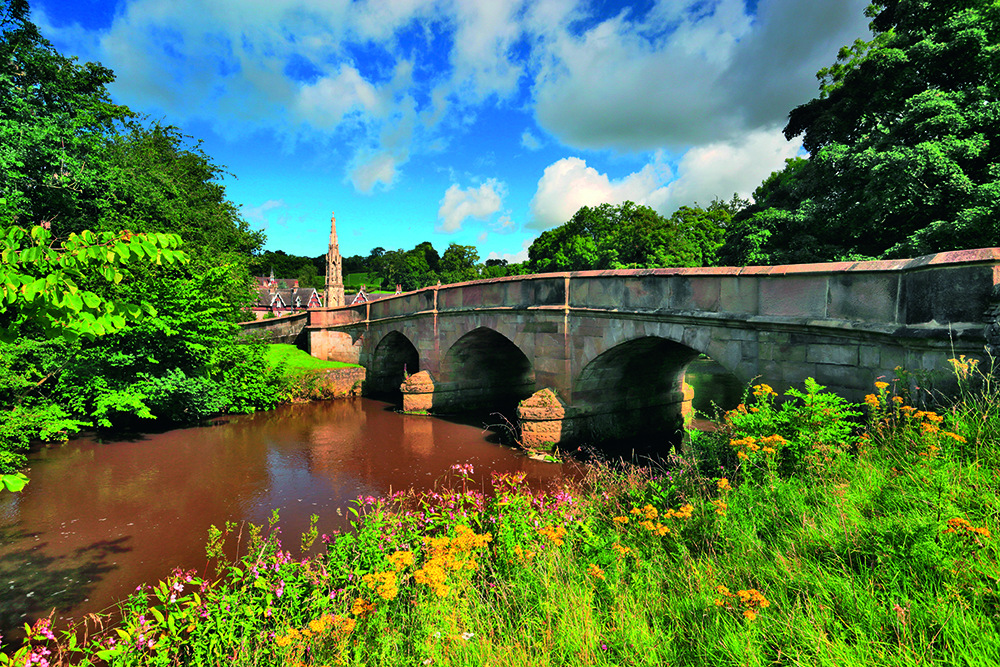 Next morning we followed a cycle route to the traffic-free Tissington Trail using quiet lanes, at first climbing gently uphill with views over the reservoir. After the village of Bradbourne there is a pretty ford and then a lung-bursting steep climb up to Tissington. The main exertion over, pottering around the estate village of Tissington, famous for its well dressings, was relaxing. Tissington is almost too perfect, with a charming duck pond, stone cottages in harmonious designs and elegant Tissington Hall (open to visitors on certain days).

We rode out of Tissington along the avenue of lime trees that make such a stylish entrance to the village. Bowling along roads lined with limestone walls, a pair of curlew wheeling overhead, we were soon in the village of Thorpe. If you only visit one church in this part of the Peak District, I would suggest St Leonard’s in Thorpe.

We locked the bikes up in Thorpe and walked through fields to Coldwell Bridge, a 100-yard-long handsome bridge across the River Dove that, today, seems very much out of place. The milestone on the bridge confirms that this stony track was once a major coach road, which fell out of use as the hill was too steep for early motorcars. Following a path along the river to the tiny estate village of Ilam we spotted a dipper like the one depicted in the stained glass but, sadly, no kingfisher. In Ilam Park (National Trust) we ate ice cream while enjoying the views from the formal Italian garden of Ilam Hall (part of which is now a youth hostel).

I always pause at memorials and think about the life lived and lost, so I couldn’t leave Ilam without stopping at the touching memorial to another five-year-old, outside  the school she attended. Isabella Peatfield died in 2004 in the Indian Ocean tsunami that killed around 250,000 people and her parents set up a charity in Isabella’s memory helping children in Sri Lanka. 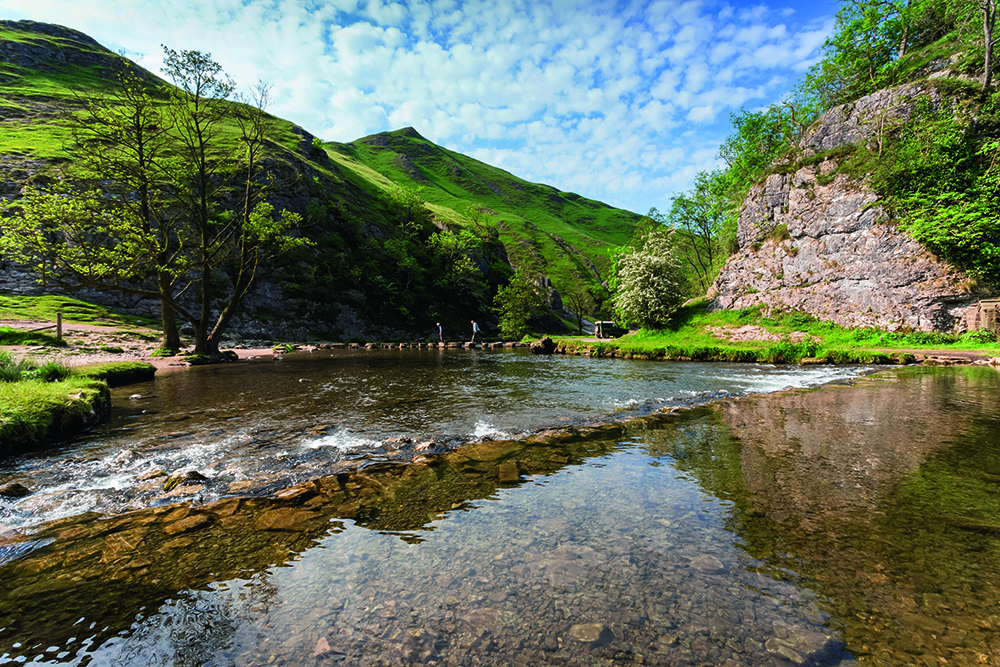 We continued on to Dovedale, which I think has always had a bit of Blackpool about it and now even has deckchairs emblazoned with ‘I love Dovedale’ outside the National Trust cabin. At the famous stepping stones I lazed in the sun dipping my toes in the water and watching visitors crossing; some running, some hesitant. Dogs were scampering excitedly back and forth, adding to the hubbub.

We left the bustle behind as soon as we went through the gate and into Lin Dale. The trickle of the stream and the hum of insects were the only sounds. We were surrounded by rafts of bright yellow hybrid monkey flowers, bright purple thyme and goldfinches fluttering among thistle plants. Passing by the hotel named after Izaak Walton (author of the seventeenth century Compleat Angler and who fished in the River Dove), we returned to the bikes.

Using a short downpour as an excuse, we had a swift half in The Old Dog, near the Tissington Trail, before cycling back along the trail for a short distance, then down the lanes to Carsington Water. After a day of 16 miles of cycling and around four miles of walking, I wasn’t up to much more than watching the rabbits nibbling the grass next to our pitch, though did manage to enjoy the woodland walk around the campsite before dark.

The next morning we drove the short distance to Waterhouses, on the Ashbourne to Leek road, for more cycling. The Manifold Track is nine miles of fairly level and multi-use surfaced track between Waterhouses and Hulme End through a stunning limestone valley. It follows the route of the Leek and Manifold Valley Light Railway that operated from 1904 to 1934. The line is generally quieter than the Tissington Trail. It was a glorious sunny day and I inhaled deeply to enjoy the honey-like smell of meadow sweet.

At first the track follows a meandering route by the River Hamps (which is often dry in the summer) but the scenery becomes more dramatic on reaching the limestone crags of Beeston Tor. Here, the Manifold joins the Hamps and I stopped to admire vintage caravans on a site under the crags. Reaching Wetton Mill, where a tearoom and nearby footpaths up to the Thor’s Cave make it a popular halt, we opted to turn back. It is always good to leave something for another time!

The area around Ashbourne is a first-rate choice for cycling and, along the way, I'd learnt a little more about the richness of our island’s history, too.