Motorhome insurance advice - taking a pet with you in your motorhome 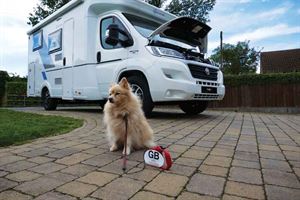 What happens to your pet when your motorhome or campervan has to be recovered from abroad? We ask specialist motorhome insurance provider, Comfort Insurance, for its advice

There was a time when taking your pet across the Channel wasn’t an option – at least not until you’d jumped through many hoops.

This would involve quarantine, much form filling and the laying out of much cash, and for most people it wasn’t worth the hassle, especially if it was only for the annual family fortnight.

But with huge advances made in the fight against rabies, things changed several years ago and you can now take a cat, dog or ferret (!) away with the minimum of fuss. However, few people take cats or ferrets on holiday with them; dogs are by far the most common pets when it comes to travelling to Europe.

The thing is, what happens if your motorhome breaks down or you’re incapacitated in some way, and you have to be repatriated back to the UK? Will your pet also be taken care of, or will you be left high and dry?

It’s a scenario that’s more common than you might think, but it’s no good just assuming that if it all goes wrong your motorhome insurance will take care of everything.

When Keith and Mary Allen’s motorhome broke down in Spain, their only thought initially was that their motorhome needed to be fixed. It didn’t need to be repatriated to the UK but it did need to be taken to a garage. Says Keith, “The problem was, the breakdown operator had a policy of no pets in its trucks – and animals weren’t allowed to be carried in any vehicle being transported, either. So, there we were on the side of the road with a broken motorhome and Oscar, our border collie, going nowhere. We ended up having a standoff and, in the end, we had to book a taxi, which was paid for by my insurer. However, the insurer made it clear that it wasn’t obliged to pay; it was doing so as a goodwill gesture. The bill wasn’t a big one but what would have happened if the motorhome needed to be repatriated to the UK? If we’d had to fly back, leaving the ’van to come home later, would Oscar have been taken care of?”

In the scenario above, the Allens would probably have been provided with a hire car to drive back, accompanied by Oscar; many airlines aren’t prepared to carry animals at all.

Pet repatriation issues are only likely to arise because of a motorhome failing catastrophically or the driver becoming incapacitated. If the pet should fall ill, the insurance you’ve taken out on them should cover any eventuality – it certainly wouldn’t be covered by your motorhome insurance.

There is another option in the event of you reaching a stalemate with your insurer when it comes to taking care of your pet. Many countries have animal welfare charities that look after pets on a short-term basis. They’ll either place the animal with a family or put it into kennels, so it’s looked after while you sort out everything – although you’ll still have to get your pet back to the UK at some point.

Mary Allen adds, “Several of our friends have pets that they take to Europe with them in their motorhome. None of them have given a second thought to what might happen to their pets in the event of a disaster; you always think that it won’t happen to you. But, as with anything that’s insurance related, it’s no good hoping for the best or making assumptions. As a result of our experiences we’ve asked some very specific questions of our insurer, about what will happen to Oscar in the event of a repatriation being needed.

Initially, the answers we got back were rather vague, offering some sort of reassurance that all would be fine, so we’ve had to insist on getting answers in writing in case the worst should happen.”

Ben Cue, Head of Operations at Comfort Insurance, says that getting the answers in advance is the right thing to do. “We have had some very difficult cases involving animals. We know how important pets are to our customers, so we will always try to support them, but the insurance policy has clear limitations. In the case of motorhome insurance, it is highly unlikely there will be any cover for pets and full clarification will allow you to be prepared”.

Each month, we will publish the next article in this series, which first appeared in the May 2017 issue of What Motorhome magazine.

You can see previous articles in this series here:

For more advice on motorhome insurance, conatct Comfort Insurance on 0800 0304206.