BY 2012, traditional analogue television signals in the UK will have been switched off – so if you want to continue watching your favourite shows you are going to have to switch over to digital.

That will mean investing in a Freeview box or fitting a satellite dish.

Don’t panic if that sounds a bit ominous. There are plenty of experts, including Andy Harris at RoadPro, ready to help. 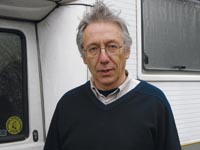 Andy Harris
Andy knows his products inside and out. The roof of his 80,000-mile Laika ‘van is peppered with holes from aerials that he’s tried out and he actually splits his time between his home in south London, the Laika and a narrowboat moored near the showroom.

He has some reassuring words about the digital changeover: “Converting to digital is not a big deal,” he says. “People get this idea you need a special TV to receive digital signals, but you don’t.”

Freeview receivers work well at home – so long as you live in the right area you can just plug them in and get a brilliant picture with extra channels such as BBC Three and Four, and Film 4 with no monthly charges or subscriptions.

But it’s more problematic in a motorhome. The main reason being that your existing aerial may not be up to the job.

“We had a chap in who paid £95,000 for a horsebox,” Andy says. “He’d had digital TV fitted and got a brilliant signal when he picked the vehicle up in Preston. He was delighted and drove all the way home to Derbyshire to show it off to the family – only to switch on and get nothing at all.”

He was relying on an omni-directional flying saucer style aerial. These may look incredibly smart, but they can struggle to deliver a decent digital TV signal. “If they are so fantastic, why don’t we all have them fitted to our houses?” Andy asks.

You can get 12volt Freeview receivers that have a magnetic aerial which goes on the outside of the ‘van.

Andy says these work well but if you are really serious you need a directional aerial (more like the one on your roof at home). Height is another important factor – Andy’s latest project is a 25ft pole that shrinks down to a very manageable five feet. It’s intended for radio hams, but Andy reckons it’s ideal for a motorhome.

Freeview is fine for UK touring, but not so clever when you go abroad because you can only pick up local stations.

No problem if you are a master linguist, but a bit annoying if all you can muster is a smattering of schoolboy French. Satellite is the answer. In theory you should be able to get a perfect picture just about anywhere that your dish can gain a clear view of a satellite.

There are dozens of dishes to choose from, but Andy says the dome-style designs have the advantage of not being buffeted by bad weather.

Once you’ve fitted a dish, you need to make sure it’s pointing in the right direction. That’s pretty straightforward at home (because your house tends to behave itself and stay put) but not so easy in a motorhome. Satellite is the answer
In order to get a picture, you’ll need to buy a satfinder. This is a device which you connect between the dish and the receiver with an indicator to show when the appropriate satellite has been found.

Most are fairly easy to use, although Andy has a tale about a computer scientist customer who complained he had spent 60 hours hunting for the right position. Turned out he hadn’t read the instructions.

Dishes that find the satellites by themselves are even easier. Press a button and, after a bit of whirring on the roof as the dish tracks around the sky, you are ready to go.

There are even ones that use GPS, so the dish knows exactly where to turn.

What can you pick up and where?

Before you decide what dish to buy, you need to check out the coverage – or footprint – offered by different satellites.

What will it cost?

Freeview receivers are relatively inexpensive. For example, a Roadstar 12volt receiver and aerial come in at £59.99. Portable satellite TV dishes start at £65 while a manual through-the-roof dish and mast costs from £245. The more sophisticated, automatic satellite dishes generally start at around £1250.

•    This feature was first published in the August 2007 issue of MMM. To subscribe to the magazine, click here.