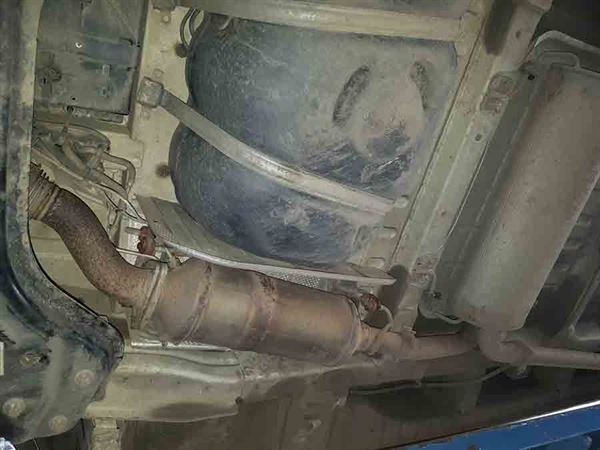 Although this feature covers Fiat Ducato vehicles in particular, most of the content is equally appropriate for other makes and models built since 2012 when diesel particulate filters (DPFs) became mandatory in order to achieve Euro 5/V standard emissions.

First, we will have a look at what this device is and then talk about what can go wrong with it.

What is a DPF? 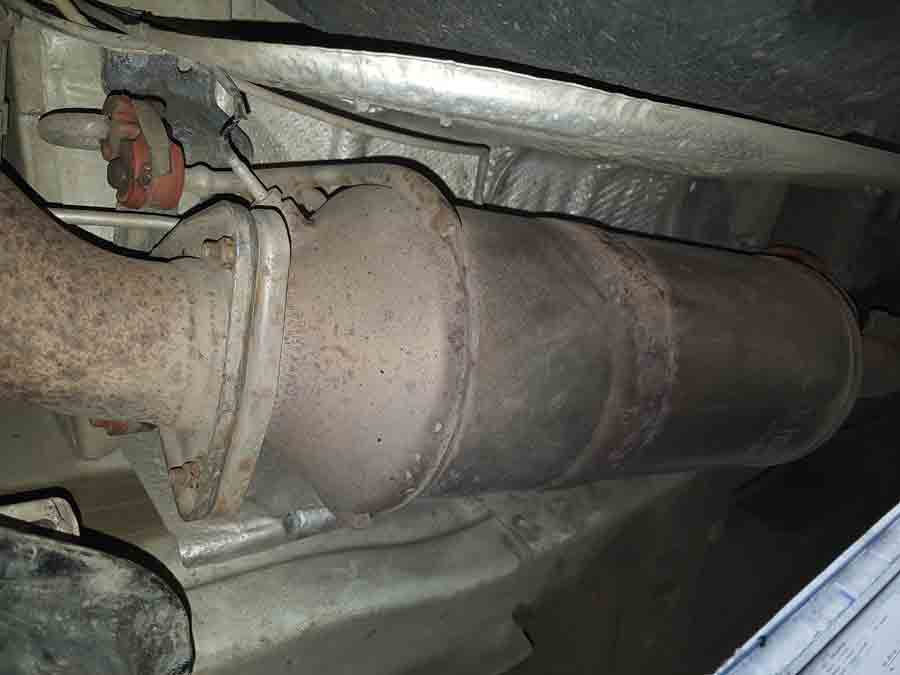 A DPF is found in the exhaust system and is located after the catalytic converter and before the silencer. It is designed to collect harmful particles and soot that are a characteristic of the process of burning diesel fuel.

There is a temperature sensor screwed into it and two pressure sensors, one near the front and another near the rear.

These sensors give a measurement in millibars (mbar), and show the differential pressure to indicate how much material is in the DPF. This is known as clogging.

The core of the DPF was shrouded in mystery and rumours of precious metals persist.

While there are sometimes metallic surfaces in there, for the most part they are a highly temperature-resistant ceramic material formed into a fine honeycomb structure. 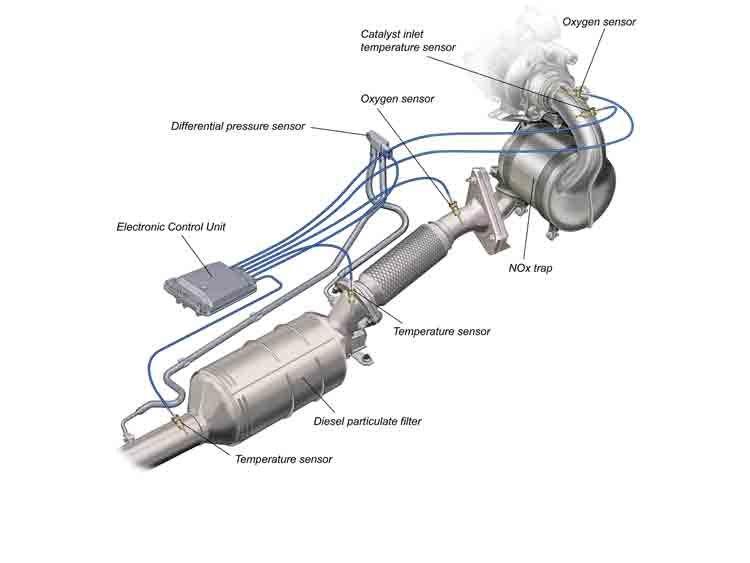 In normal operation there will be a gradual build-up of by-products and, when the levels of material in the DPF reach a pre-determined threshold, a process known as regeneration is started. This all happens automatically without driver input.

During the process, the mixture of fuel to air is enriched, raising the temperature of the DPF to somewhere between 500 and 650˚C for a period of a few minutes while the excess material is burned away.

You might notice an increase in engine temperature on your instrument panel, cooling fans running, a little extra smoke from the exhaust or a different smell during the process but, if all is going as intended, you might not notice it at all.

This will occur something like every 300 to 400 miles typically but more often if you have been driving at low speeds or leaving the engine idling for more than a few minutes.

The process cannot be started until the engine temperature is greater than 70˚C and will reach approximately 100˚C for at least 10 minutes. The temperature of the DPF itself will reach around 650˚C and so where you are parked is very important. You must never do this over grass!

In some circumstances the DPF can become so clogged that a regeneration will not be able to clear the problem and repeated regenerations can do no more than possibly harm the engine.

There are DPF cleaning processes that can be done in situ and some that require removal; both have high rates of success and, with a regeneration carried out afterwards, can restore the unit to almost as new condition.

What can go wrong with a DPF?

A lot can go wrong with a DPF. In the good old days, if there was a problem with an engine, it had a way of communicating this to you – bad fuel, air and turbo pipe leaks or faulty injectors all have a signature colour of exhaust smoke. And many other malfunctions that would not affect how the engine ran or what it sounded like could also leave clues.

Almost all types of smoke or soot are now caught in the DPF and, in most cases, the first sign of a problem with the engine will be a blocked DPF or it will have become clogged more quickly than the system is able to cope with. The threshold for a regeneration can be exceeded. If this happens, a warning light will illuminate and power may be restricted (limp home mode).

There are other possible reasons for an engine management light (EML) or a DPF warning light to illuminate, such as an electrical fault with either a temperature sensor or a differential pressure sensor. 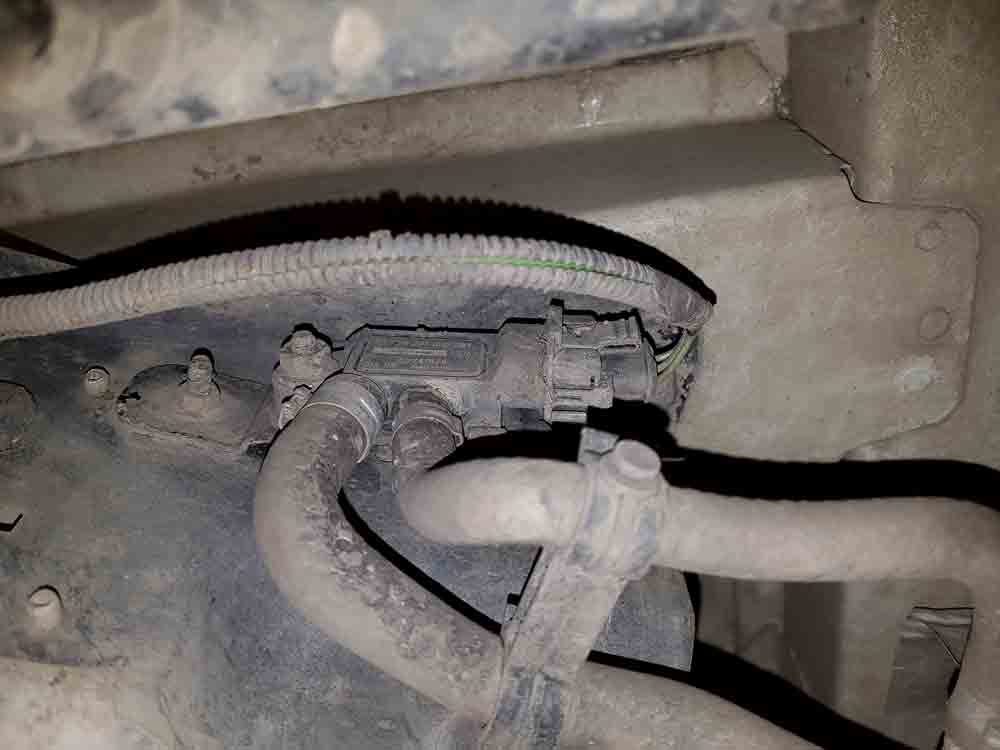 Even a malfunctioning engine cooling fan can prevent the regeneration process from starting and switching off the engine during a regeneration can cause considerable upset, too.

The only way to find out what has happened and gain clues as to the course of action required will be to use a suitable diagnostic device.

There may be helpful fault descriptions such as ‘DPF temperature sensor’ or ‘DPF pressure sensor’, which should lead directly to the fault but the most common fault code description is ‘DPF first level clogging exceeded’. This is where opinions are divided and advice varies.

The fact is the engine has produced material that’s clogged the DPF more quickly than it was able to regenerate and this needs to be investigated.

The amount of clogging will be expressed as a percentage but do not be alarmed - 60-90% clogging is considered normal and only values over 130% are considered excessively clogged. Apparently even 200% is not the end of the world!

If you have had a DPF warning light on, it would be very foolish to make the engine perform a forced regeneration of the DPF without first making a number of checks such as oil and coolant level, cooling fan operation, look for splits in pipes and hoses, clogged air filter, play in the turbocharger shaft and so on that could have caused excessive smoke if the DPF was not there. I’ve changed a large number of cooling fans recently that have just stopped working.

If there has previously been an EGR fault, this can lead to excessive amounts of oily, sooty residue accumulating in the turbo pipes and inlet manifolds. This sticky stuff can get to the DPF and is difficult to burn off during normal regeneration. If you send a load of soot down the exhaust on top of that it is easy to see how it could quickly become congested.

Once the numerous checks are carried out, the diagnostic device should be used to attempt to clear the fault and, if this is successful, the actual differential pressure reading while the engine is running will be critical. A well-serviced Fiat Ducato 2.3-litre will have an idling DPF pressure somewhere between eight and 15mbar. If you see that kind of reading, there may be no need to do anything else; it might just be a blip or a regeneration that failed to complete.

A reading of between 20 and 40mbar would indicate that there is a fault and that, as soon as the vehicle is driven, the fault code will reappear.

At this kind of level and, with the required checks for an obvious mechanical problem eliminated, I would instigate a forced regeneration.

If the measured pressure at idle is over 40mbar I would assume that there is a significant problem and would not attempt a regeneration without doing all of the previously mentioned checks and an injector leak-off test.

The role of injectors

The most common culprit for persistent DPF clogging is one or more diesel injectors not operating properly. The two most common faults are excessive back leak (the amount of fuel returned to the tank is too high, indicating under-fuelling) and over-fuelling, which may present as a louder than normal ticking or, in severe cases, a knocking when accelerating.

I normally tackle the injectors with excessive back leak first and, if that does not help, I change the others as well. Injectors cannot be tested for anything other than back leak while installed in the vehicle, nor can they be repaired in situ.

Getting injectors and the screws that secure them out of the cylinder head is not easy. I soak the injectors and screws with a releasing solution for a few days prior to attempting to remove them and get the engine as hot as possible also. Sometimes the screws break and the removal of a broken screw is very difficult and very time consuming.

To allay your fears a little, our Euro 5/V vehicles have had injector issues from as little as 100,000 miles and two years but most are managing 150,000 miles and three years without trouble. Compare that with the Euro 4/IVs that have done 200,000 miles and more with no issues (but have no DPF to clog up!)

The injectors used in Fiat 2.3-litre engines (Euro 3, 4 and 5) are the same units. The fuel pressure in the injectors has increased from 800 to 1600 and now 1800-plus bar. Most other manufacturers are in the same position.

I don’t know how long lower mileage, less frequently used vehicles will be without issues. I do know that a low mileage vehicle will be just as problematic when it comes to removing injectors.

So the DPF may last the lifetime of the vehicle. If a fault occurs, there may be some who suggest that it has reached the end of its life. However, if the early warnings are heeded and remedial work is undertaken to cure the cause of the clogging, the DPF will be cleaned or regenerated fairly easily and life will go on.

In the case of a motorhome from any manufacturer, the DPF itself will rarely be the problem.

The computer software, the engine and any electrical device attached to it is another matter.

The DPF is a useful device and does reduce harmful emissions but it depends on a very healthy engine that is not producing excessive amounts of soot, smoke or oily substances.

It is possible to remove the contents of the DPF and to erase all existence of the device from the vehicle ECU, but to do so renders the vehicle non-compliant (illegal).

Stricter new MoT test rules since May 2018 will surely pick up on even the most inconspicuous modifications. Even if the smoke test does not register sufficient smoke particles to fail that part of the test, the examiner will have to fail the test if any smoke is seen at all, which of course a vehicle fitted with a DPF would not ever do.

If you found this article useful, make sure you read MMM magazine every month - it's packed with practical advice and technical questions answered. Get a digital subscription and browse and buy back issues copies here.