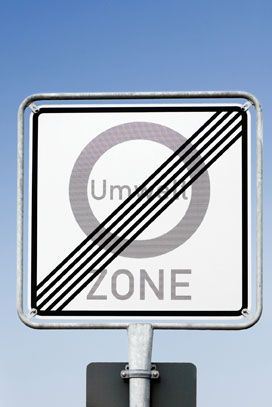 Richard Yarrow understands why motorhome drivers are getting confused about the different emissions regulations in force in cities across Europe. Beware if you get it wrong you risk being seriously out of pocket

Motorhomers heading to Europe are being advised not to fall foul of recently introduced low emissions zones (LEZ) regulations. Many cities across the Continent now have central areas that are only for use by the ‘greenest’ vehicles. In other cities, it’s just a single road such as a motorway that’s restricted. But if you don’t play by the compliance rules – and you may not even if you drive the most modern and fuel-efficient ‘van with a catalytic converter or diesel particulate filter – you risk a significant fine.
Industry experts believe there’s a lack of awareness about LEZ among motorhomers. Iain Geddes, senior technical advisor at The Camping and Caravanning Club, said new ones were cropping up all over Europe, mostly in city and town centres.
“Not all of the information a visiting tourist would need to know – such as which cities have them, which vehicles are not permitted or how to gain permission or pass – is readily available on the internet,” says Iain. “The onus is on the visitor to check prior to entry into a city as to whether they are permitted to take their vehicle in.”
Iain adds that anyone adopting an ‘I’m sure we will be fine’ attitude risks adding substantially to the cost of their holiday.
These low emissions zones are spreading like wildfire as national governments work to meet EU-imposed regulations and deadlines on cutting pollution levels in cities.
It doesn’t matter where you’re planning to drive your ‘van in Europe, the chances are you will be going near a LEZ.
Germany alone has almost 50, while Denmark and Italy also have them in numerous cities. Transport bosses in other countries including Austria and Hungary have already given approval for LEZ, but have yet to act. It’s only going to be a matter of time: the evidence suggests LEZ do help air quality, with various local authorities reporting a drop in levels of diesel particulates and oxides of nitrogen.
And just because you’re a foreigner, don’t think the rules won’t apply to you. Confusingly, it is true in some cases, but only a minority and you need to know which LEZ you can’t afford to ignore. Any European-owned motorhome coming into London’s LEZ from January 3, 2012 has to comply with the regulations, and the same is true for Brits heading across the Channel.
Let’s start with the easy one. You don’t need to worry about France for the moment because it has no LEZ.
The German LEZ network is the most relevant to UK motorhomers because it’s
a popular destination and the green badge scheme is easy to explain. Called the Umwelt Plakette – literally ‘ecological plaque’ – it applies to all vehicles with a diesel engine using the central area of most German cities and large towns. There’s a full list at www.umwelt-plakette.de, but it includes tourist areas such as Berlin, Stuttgart and Munich. Motorhomes of any size are included; so if you ignore the rules, you risk a fine. However, it’s not as easy as just buying a ticket. You need to know the emissions standard of your ‘van because different regions operate different standards. Some cities require you to be Euro 2 compliant, but in others it’s Euro 3 or Euro 4. Signage at the LEZ boundary will let you know but by then it’s too late. Check the abovementioned website for exact details and also use it to buy your Plakette. Click on the Union Jack flag for English language instructions. Each one costs €40 (£33.45) and should be stuck in the lower right corner of your windscreen, as seen from behind the steering wheel. Once you have your Plakette, it’s valid in all German LEZ and for the life of the vehicle. It’s non-transferable.
The Danish system is called EcoSticker
and is very similar. From November 1, 2011, all foreign buses and trucks need one if they’re travelling through the central areas of Copenhagen, Aarhus, Odense or Aalborg. This only applies to motorhomes with a GVW of more than 3.5 tonnes. Again, it’s green in colour and non-transferable. Buy one at
www.ecosticker.dk and click on the Union Jack flag for English.
The Netherlands is within easy reach of British motorhomers either as a destination
or en route elsewhere. Eleven cities currently have LEZ, including the holiday hotspots of Amsterdam, Utrecht, Eindhoven, Delft and Rotterdam. The rules do apply to motorhomes with GVW of 3.5 tonnes or more. However, the official website www.milieuzones.nl states: “The authorities are currently examining whether the restrictions can be applied to foreign vehicles. For the time being, [they]
will be allowed to enter without restrictions.”
That’s good news for motorhomers from the UK, but the rules could obviously change and this illustrates a key point. Iain Geddes from the CCC explained: “It’s important to keep checking because you may plan a trip and in the time between then and departure, a new zone may have come into force or the minimum standards may have changed. Again, you risk a fine.”
Several other countries operate LEZ. The EU-funded website www.lowemissionzones.eu has useful details on many of them, including those in Germany, Denmark and the Netherlands. But the lack of a centralised application system for a windscreen sticker – as exists with Germany and Denmark – makes it harder to determine what elements, if any, might apply to travelling ‘vans.
Italy has several LEZ, including ones in Rome, Naples, Pisa and Perugia, and our understanding of the current situation is that all motorhomes are affected. In Sweden the rules only apply to ‘vans with GVW of more than 3.5 tonnes, and it’s the same for the LEZ that operate in Budapest and Prague. Austria’s LEZ don’t apply to motorhomes at all, and at the moment no ‘single road’ zones apply to ‘vans. Obviously all information given above has the potential to change.


LEZ are known by the following names around Europe:


LEZ ADVICE FOR MOTORHOMERS
The Caravan Club has advice for anyone worried about LEZ in European cities: