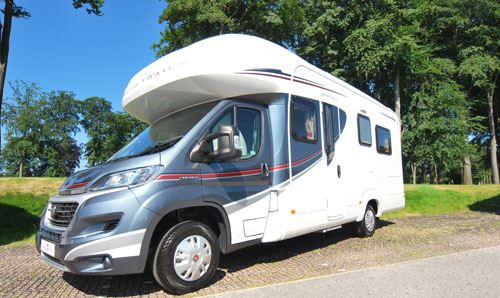 Auto-Trail, which is part of the massive Trigano Group, is a major British manufacturer that only makes motorhomes. It manufacturers both coachbuilt and van conversions and remains a massive player on the British market with a huge – and very loyal – customer base.

Like most manufacturers this year, it has benefited from the surge in new motorhome sales. For the 2015 season, the company enjoyed 1,839 motorhome registrations, a 21% increase on the previous year. So far this year there has been an increase of 15.1%, with Auto-Trail selling an extra 786 motorhomes, thanks to record retail sales through its dealer network. This means around one in every five motorhomes sold in the UK are an Auto-Trail.

The growth in sales means that current production is reaching maximum capacity at its factory at Europarc near Grimsby. However, last year Trigano confirmed a major investment at Auto-Trail that will see its factory rebuilt and expanded and, with that, comes a huge increase in capacity.

This will help the company manage the anticipated growth is sales of its new motorhomes, which, according to its Managing Director, Dave Thomas, will continue to break records. He says factors such as flexible pension arrangements, interest rates that are at an all-time low and new ways of funding the purchase of a motorhome, such as new PCP deals from Black Horse, are all drawing people into the motorhome hobby.

The Grimsby-based manufacturer has renewed several models with its range but has placed an emphasis on its larger coachbuilt motorhomes.

There are six different ranges on offer from Auto-Trail with new models in all of them except the V-Line Sport van conversion. To kick things off there’s a new V-Line SE – the 636. This is 6.36m long and has a rear lounge with facing bench seats. These can be used as twin single beds or extended into a large double bed. The sink has an extendable flap to create a work surface that comes in the Limestone finish. At the front, the captain’s seats rotate to face the half-dinette. The engine is the Fiat Euro VI 2.0-litre 115bhp.

There’s one new Imala for 2017, the 734. The 7.05m-long motorhome comes in the European favourite layout by offering twin single beds at the rear. The lounge has two facing bench seats with an option for a half-dinette. The kitchen gets a new worktop surface with Blizzard etchings and has a full-sized oven with separate grill and oven. There’s also a microwave. The 734 is 3.1m high and 2.77m wide. It uses the Fiat 2.3-litre 130bhp engine and sleeps four, with an extra two berths available on the Hi-line version thanks to an overcab bed.

If end washrooms are more your thing then have a look at the new Tracker RS which has an extra-large shower. The lounge features a large area with facing bench seats and rotating captain’s chairs. The benches convert into a big double bed as well. You get an L-shaped sink unit, a Thetford N3142 narrow fridge and improved rear storage. The motorhome is 6.94m long with a GVW of 3,500kg.

Now, if you want a decent-sized lounge and a fixed bed, then have a look at the new Tracker RB. This has a transverse island bed at the rear and twin, facing bench seats at the front. The island bed slides up to create more space. The overall length of the RB is 7.6m and it comes on a 4,250kg Fiat chassis. All the Trackers get a new bedding scheme called Tara.

A brace of Apache models are on the way for 2017, in the shape of the 632 and 634. The 632 is 7.37m long on a 3,500kg chassis and features a transverse double bed at the rear, an L-shaped sink and a Thetford N3142 narrow fridge in the kitchen. The shower has a separate cubicle, but you need to go past the toilet and washbasin to get to it. In the lounge there are facing bench seats which can be converted to a half-dinette if the chassis is uprated to 3,650kg. The bench seats also convert into a bed, making this a four berth as standard and six-berth on the Hi-line which has an overcab bed. There are two travel seats unless the half-dinette is installed and then you get four.

The Apache 634 is the same length at 7.37m and features the same fridge and washroom, plus an L-shaped sink unit, but changes the layout around completely. At the rear is now a big, U-shaped lounge with the toilet and shower behind the drivers seat. Behind the passenger seat is a wardrobe. This model has two travel seats and two berths as standard, adding another two on the Hi-line version with an overcab.

The Serrano is the new model in the Frontier range, with the Comanche “S” and the Delaware “S” being variations on existing layouts. The Comanche and Delaware “S” models swap the original rear island beds in favour of twin single beds in both cases. The original Comanche, and the S version, have also been tweaked anyway, with a larger, curved shower and bigger bathroom. The Delaware “S” also has a new storage unit for charging your smartphones. The Comanche “S” is a whopping 8.73m in length with a GVW of 5,000kg.

The new kid on the block is something of a bruiser as well, measuring 8.05m in length and weighing in with a GVW of 4,500kg. The Serrano features a transverse double bed, copious storage, separate toilet and shower room with twin facing benches for the lounge at the front. It comes with a 147bhp engine and sleeps four as standard, with an additional two in the Hi-line overcab. There are only two travel seats unless the bench seating is converted into a half-dinette in which case it gains another two belted seats.

All Frontiers are now built on the Al-Ko chassis and have a new rear GRP panel, roof and overcab at the front. There’s a big fridge with separate freezer in the form of the Dometic RMF 8505. 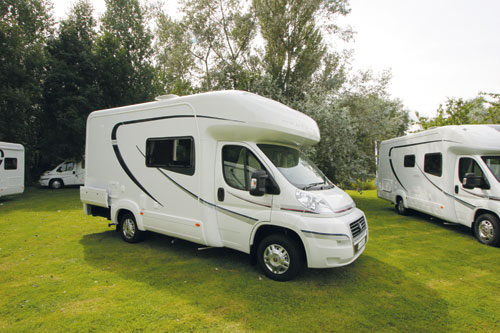 Back at the turn of the century, Auto-Trail announced a
new baby – a micro-plus coachbuilt based on Fiat’s Scudo with an Al-Ko chassis extension, retailing for just under £28,000.

It didn’t take off, so it wasn’t long before Auto-Trail decided there was a great future for its Tracker – but on the bigger Fiat Ducato base. These are the ones to go for.

By 2008, Auto-Trail had already had almost 100 per cent success selling Trackers with SE Packs of selected options – offering sat-navs, CD/radios, flatscreen TVs, reversing cameras, recessed awning and more. Today the choice is Media Pack 1 or 2, the latter even including a satellite TV system.

Tracker simply grew and grew. For the 2013 season, the RB (island bed) joined the range – the biggest Tracker yet, at 7.60m long. But it’s the EKS that remains our favourite, offering all a couple could need (even a separate shower) in a compact body with a good-sized front lounge.

Can’t find a Tracker? How about... Leading British manufacturers excel at producing smaller coachbuilts with high levels of luxury. Obvious equivalents come from Auto-Sleepers
(with its Nuevo) and Swift Group (Bessacarr, especially).