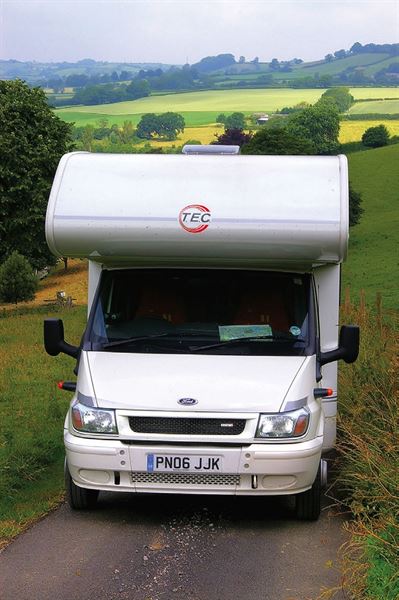 YOU'VE really got to feel sorry for Which Motorcaravan’s long-term test motorhomes.

No sooner had fellow tester John Wickersham delivered the magazine’s current steed, TEC’s FreeTEC 698G, back to its Warners base after a two week trip abroad (a trip that was itself preceded by Editor Vaughan’s 2,000-mile European trek), than yours truly comes along and whisks it off again for a week-long tour of the West Country. My mission? To unearth those rare sites that are small enough to qualify as little gems, but big enough to not feel claustrophobic.

As such sites are often of the facility-free CL and CS type, there was every chance that I’d be living a self-sufficient existence for the week, and Mr Vaughan’s shiny new TEC seemed to tick every box on my shortlist: an always ready bed (two, in fact); a blast-furnacestandard water heater; cab air-conditioning; and a decent washroom. All this, and a potent 2.4-litre TDCi Ford Transit base allied to a six-speed manual gearbox, a combination that should see the miles roll by with effortless ease.

‘Effortless ease’ is not how I’d describe my first 24 hours with the big TEC, though. The ultra-rapid indicator blinks – in the absence of any blown bulbs – was irritating at first, not least as the hazard lights blink at the more usual slower rate. But it was the six-speed gearbox’s frequent point-blank refusal to engage fourth gear that really infuriated me. Sometimes – and I’m not kidding – it took me upwards of two or three goes to engage fourth, by which time the engine revs had usually died away: annoying – and potentially dangerous – when you’re negotiating an uphill slope. Thank goodness the Ford gets a new dash-mounted gearstick in its ’07 guise.

I also got fed up with having to slam the entrance door violently to make it close properly, and I really think the longitudinal lounge settee needs a window set into the wall behind it, given the absence of a panoramic rooflight in the vicinity or a window in the entrance door.

The rear bedroom, too, suffers from a mattress that is narrower at the foot end than the head end, thanks to the intrusion of the washroom wall, and a window that’s quite simply on the wrong side of the vehicle. At which point, you’re probably thinking that the TEC and I just didn’t hit it off. Nothing, however, could be further from the truth.

It is – reluctance to engage fourth gear aside – a great motorhome to drive, the rear-wheel drive chassis providing plenty of traction on steeper gradients, and the grunty engine digging down into its plentiful reserves of torque. It handles with aplomb, too, even if passing low-flying lorries can, on occasion, throw it briefly off-line on the motorway. And while road and engine noise are rather more intrusive than with the Renault Master, sixth gear makes for a relatively relaxed 70mph cruise. Ours has a rather good JVC CD/ radio, too, which is hooked up to two extra speakers in the main body of the TEC – one in the lounge and one in the kitchen.

My first night was on a former CL in deepest Herefordshire, namely Penlan Caravan Park, just south of Kington, and once I’d inched my way through the 10-bar gate at the entrance and swept up its surprisingly substantial slope, the TEC was pitched up and perched on its canary yellow wedges, gazing out over what was, I’m sure, a fabulous view. Unfortunately, the low cloud and drizzly rain rendered the panorama all but obscured.

Never mind. I settled down in the TEC’s half-dinette with a coffee and gazed at nothing much out of the side window as the rain drummed hypnotically on the roof. Before I knew it, I’d nodded off.

In fact, I spent quite a bit of time in the TEC’s lounge, either perched on the (rather firm) settee, or ensconced luxuriantly in one of the two swivelling cab seats watching either the Wimbledon tennis or World Cup football that dominated my week-long tour. Lighting, legroom, support – they’re all top drawer.

The seemingly missing separate shower cubicle in the washroom didn’t turn out to be much of an issue for me: simply sliding across the Perspex door created a showering area that was more than big enough for me, and I thought the pressure from the riser was extremely good, too.

Moving on to the first of my next two sites, both of which were in deepest Somerset, I soon discovered that the TEC’s natural environment definitely isn’t the urban sprawl. Inching my painful way through Bristol’s seemingly endless traffic jams showed the TEC’s almost on/off clutch biting point and stiff, rubbery gearbox in a less than flattering light, their combined efforts seeing me stall at one particularly steep set of traffic lights not once, but three times.

Back on faster, sweeping roads, however, the big Ford started to make sense again, its arctic air-conditioning system keeping me cool, calm and collected, even in the face of an outside temperature of 35 degrees, and a predictable sweep along the roads that dive through the fabulous Cheddar Gorge was an easy, enjoyable affair.

Various faults aside, it’s hard to not fall for the charms of the big Ford. It has neither the style of the Knaus Sun TI nor the allmod- cons sybaritism of the Swift Kon-Tiki but its strong engine and appealing layout are sure to find friends, especially when the new Ford Transit base comes on stream. Couples – and especially families – looking for a long-distance mile-muncher should consider it quite seriously.