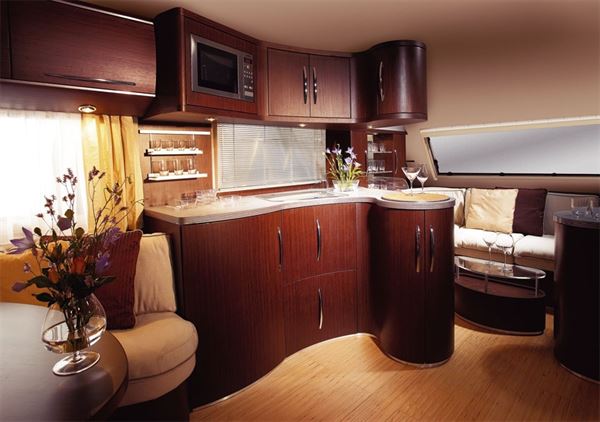 YOU may not know the name Tecnoform but if you’re a motorhome enthusiast, you should.

From a factory outside Bologna in northern Italy Tecnoform manufactures furniture for 60 per cent of the European caravan and motorhome market, as well as 50 per cent of the Australian one.

And the company has been in business for more than 40 years, growing and innovating. Today it now can claim leading names such as Hobby, Hymer, Knaus-Tabbert, Mobilvetta Design, Swift and Trigano among its regular customers.

Tecnoform has more than 40 customers with, between them, at least 160 brands. Despite this success, Tecnoform remains proudly a family business. Founded by the late Federico Kerkoc, the business is today run by his three sons – Roberto, Andrea and Renzo – who continue their father’s ambition of always being ahead of the market.

Hence the concept designs that Tecnoform produces every year for the Düsseldorf Caravan Salon. Annually pushing the boundaries of what is expected in a leisure vehicle, resulting in many patents for details such as the suspended wall unit hinging system. And some of these concepts become reality in ground-breaking leisure vehicles such as Mobilvetta’s radical Nazca A-class motorhome, which took its interior design from Tecnoform’s 2003 concept, called Nino Vitali.

Every year the next concept instigates research into new products and materials, for leisure vehicle cabinetwork is very different from domestic furniture. And unlike some of its rivals, Tecnoform does not operate in the domestic market – the company even keeps its own caravan so that staff can understand the market. After decades of research Tecnoform’s products are designed to deal with vast variations in temperature, as well as vibration and movement as the vehicle is driven.

Today, Tecnoform is the leading specialist in the industrialised manufacture of curved furniture for the leisure vehicle market and the scale of the operation is only grasped when you start to hear the statistics.

Swift alone has 3,000 part numbers each year and twice a week parts are shipped from Bologna to the company’s Cottingham production line for inclusion in the latest Swifts, Bessacarrs and Aces.

In total Tecnoform makes around 13,000 products a day and when we visited the factory we saw boxes ready for dispatch to brands as diverse as Avondale in the UK and Jayco in Australia.

The company has six main production lines, and using technology developed inhouse, it is able to manufacture at up to 10 times the speed of its rivals. And new designs require massive investment – their curved cupboard doors with a groove required a new machine costing over a million dollars. Any curve or radius is possible, says Tecnoform, but millimetric precision is required when two different wood finishes meet on one panel (a recent trend).

Another innovation is a patented lightweight table that has no frame, so fixings can be screwed in anywhere on the panel. It is up to 50 per cent lighter, and as no fixing positions are needed, it will be subject to fewer warranty claims. Production of this starts early next year, so expect to find a lighter table in your 2008- model motorhome!

The next target is the massive American RV market, where amazingly there is no equivalent large-scale  specialist furniture supplier and both quality and styling are years behind the European scene.

However, as ‘gas’ prices rise, manufacturers will be forced to reduce weight to improve fuel economy and already Tecnoform is working with the US’s third largest leisure vehicle manufacturer, Forest River, which produces 70,000 units a year. With a market of 380,000 RVs last year and only half a per cent of those using lightweight curved locker doors, there is clearly huge potential across the Atlantic.

Tecnoform is a key player in the motorhome world, then, but more than that it is a company that manages on the one hand to seem like a big friendly family and on the other to be a dynamic innovator. We can’t wait to see what’s been developed for this year’s concept!