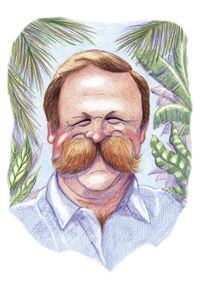 
TV star Dick Strawbridge takes on the first of his motorhome challenges: to use only scrap and salvaged parts to create a piece of equipment that turns the kitchen of a used coachbuilt into one suited to a talented chef who likes his pans hot and his smoke alarms quiet...

The motorhome that was delivered to my smallholding in Cornwall was different to the Auto-Sleeper Executive I’d borrowed for my first outing. This model was a 2007 Auto-Sleeper Hampshire. Having said it was different there were many similarities: the finish, the way everything was optimised to use the available space and the general feel of the vehicle.

The biggest difference was the layout and, I have to say, I did like the fact that the table/bed was at the rear rather than directly behind the driving seats.

Having my workshop to hand I had the opportunity to ‘customise’ as I saw fit. I had no desire to re-upholster though it is something I’d consider on my own vehicle. So I thought of how I could make the vehicle fit for me. I love my food and knew I’d want to cook so I spent some time considering the kitchen.

There was an opening window directly behind the cooker, which was very positive, and I liked the close proximity of the cooking area to the door. However, just up above my left shoulder was the smoke detector. I believe that hot pans are essential for effective cooking. I have always cooked on gas and the only fossil fuel used in my eco-farmhouse is a couple of bottles of LPG that connect to the burners on my oversized cooker.

At home, we have an extractor from hell in the kitchen so we don’t have the smoke detector as a means of informing people dinner is served. It must be my upbringing and the fact that deep down I’m very sensible, but I’d never even think of tampering with a safety feature. So, the easiest solution – a simple disconnection of the smoke alarm – was not an option. I needed a sure-fire method (no pun intended) of getting rid of the excess smoke. Time for a walk to the workshop.

I’m not sure my workshop could be described as normal, I don’t throw much away and my collection of treasures are all very carefully arranged (at least I know where they are – most of the time). Challenge Dick Strawbridge I immediately spotted a couple of rather serious fans. The first one was for my whole-house ventilation system and could have been installed in a rather significant wind tunnel, but it was mains-powered and the inverter in the motorhome would have probably had issues if I’d even thought of taking it in there.

The second was a petrol powered fan of dubious origins that was cooled using what appeared to be spinning razor blades. Even with gloves on, I am not aware of anyone successfully using it without bleeding so I left it hanging from the rafters.

In a box I found a dashboard-mounted fan in a wire cage that was meant to be plugged into the cigarette lighter. First impressions were that it was probably going to be quite useful, so I plugged it in and was totally underwhelmed. It was pathetic, which was obvious why it languishing in a box. Back to the drawing board.

What I needed was a powerful 12V fan that would be happy running for the duration of my cooking escapades. I had one of those light bulbs coming on over my head moments... and proceeded to take apart an old computer. The cooling fans in computers are really well made, built to run for years and, the good bit, run at 12 volts. Having raided my computer graveyard I pulled together what I needed:

I decided to keep it simple. I cut some Perspex to size so it would sit in the open window above the cooker. Now I needed fans to create enough suction to pull any smoke from my cooking out of the vehicle. I had three fans so decided to use them all; faint heart never did win fair maiden.

Having cut some holes, and bolted the fans to the Perspex, I joined the three sets of wires together and made sure they were all blowing the same way (normally there is a little arrow as an idiot’s guide, but the little fans had none). The fans were moving a decent amount of air so it was time to test my creation. I had a box of smoke pellets, used by plumbers to see where ducts go, so lit one with the Perspex clamped to a workbench. It did what it was supposed to and the smoke was sucked through.

Testing is all well and good but you have to see if it works, so it was off to the motorhome. It was time for some cooking. I needed to see what would happen, but the idea of burning something on purpose, to generate smoke, seemed wrong. Then I remembered my stove-top smoker, it was a better solution that lighting a couple of smoke pellets inside the motorhome. One smoker, a cup of sawdust and half a dozen pigeon breasts later, and it was about to get interesting.

I popped my extractor into the window and plugged it into the cigarette lighter, shut the door and headed outside. The electrics couldn’t have been easier. Each fan had a red wire and a black wire (there were some random white ones as well but I ignored them). I stripped back the plastic from the ends of the wires and by collecting the three red wires together and twisting them into one fatter wire and doing the same thing with the three black wires, I had two wires to be connected to the cigarette plug I had salvaged.

It was a matter of connecting the stripped back wires of the plug end to the fan wires. Therein lies a little problem: the wires on the plug end were both black. But fear not there are only two choices and the worst thing that could have happened was the fans would have gone backwards. I know I could have tested polarity with a multimeter but life is too short and I was lucky enough to get it right first time. A bit of tape and all was ready. There was no need to worry about fuses as the total system drew about one amp and the cigarette socket is well protected with fusing.

But with the extractor plugged in and running I stood outside and waited. There was not a peep from the smoke detector, which I did check was working, and the smoke came gushing out. As if that wasn’t good enough I had a lovely supper of smoked pigeon breast with fungi, sherry, thyme and cream.

You’ll be glad to hear I can now be as creative as I like in the kitchen, so the fridge is stocked and I’m ready to go. The principles are very simple and there is another use for my build: it can be used in reverse, which makes it very nearly an air conditioning unit. Maybe I should patent my cooking cooling computer castoffs?


Next month, we challenge Dick to design a green motorhome. As the presenter of It’s Not Easy Being Green, we think Dick will come up with some interesting ideas on how to make a motorhome as environmentally friendly as it is possible to. If you have an idea for a motorhome challenge for Dick, email us at [email protected] and put ‘Challenge a Celebrity’ in the subject box.


Thanks to Marquis Ivybridge for providing the 2007 Auto-Sleeper Hampshire. This model (which is now back to its original spec) and a selection of other new and used motorhomes can be viewed at Marquis Ivybridge, Lee Mill, Ivybridge Nr. Plymouth, Devon PL21 9EG.
Tel: 01752-892977.

This feature was originally published in the January 2012 issue of MMM. Click here to download the pdf.