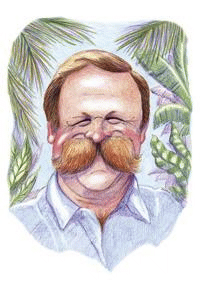 
Dick Strawbridge, the moustacheod eco star of Coast and The Hungry Sailor, has agreed to subject himself to a series of challenges by MMM.

Daniel Attwood talks to this 52-year-old ex-army colonel and engineering graduate about how he came to be an eco champion despite a passion for cars, motorbikes and all things mechanical and why he couldn’t be happier meddling with engines and fixing things, even when they are not broken...

Dick Strawbridge is, by his own admittance, a fully-fledged telly tart. He has appeared in primetime TV series that have engaged viewers from all generations. His appearances in Coast, It’s Not Easy Being Green, MasterChef, Scrapheap Challenge and more recently The Hungry Sailor, which has just been screened every weekday during October on ITV, have assured his standing as a modern day TV celebrity.

But there is so much more to this self-confessed screen tart and his trademark moustache.Bought up in Northern Ireland just at the start of ‘the troubles’ with army blood in his veins – his mother’s family were military stock – was perhaps not an ideal start. However, Dick rejects this. His overriding childhood memories are happy, he says.

These memories revolve around squeezing the large family – he is one of seven children – their Labrador dog and some friends into a Vauxhall Victor Estate destined for a weekend camping on the Antrim coast.

“Dad would call up and tell us to get the car ready. In would go the contents of the fridge, the double bedroom tent, our sewn-up blankets which acted as sleeping bags and all of us,” he says. “There were no seatbelts then. It was terrific fun, we had an amazing time.”

The tent was eventually replaced by a caravan, which was itself replaced by a Fiat-based motorhome just two years before Dick left home, aged 16, destined for army college.

“It was an amazingly happy time...the whole era was one of just ‘get up and go’, which is what we did! What I learnt was that we didn’t need to spend a lot to have a lot of fun – every weekend seemed to be a holiday, it was a very different era.”

The seeds were sown for this 16-year-old to build a life filled with adventure and fun.

To some, the army would not be the place for fun, although adventure was certainly on the cards. “I fancied the army life – I was not going to have an office job. But I was not good at discipline and was never well behaved.”
Despite this apparent disregard for authority, he became a second lieutenant by 19. A few years later he gained a degree in electrical engineering and over the following two decades he rose from Troop Commander to Lieutenant Colonel.

“Being in the army meant I was forced to eat and sleep in bizarre places. I have slept submerged in water and in five star luxury hotels. I have eaten raw food I killed myself and had silver service dinner with royalty.”

But that passion for enjoyment (and bending the rules), whatever the circumstances, always shone through. “In Germany I turned the back of army four-tonne trucks into motorhomes,” he says. “We put beds inside so we didn’t have to sleep on the forest floor, we even pinched sofas for somewhere to sit. We proved you could have a comfy bed and somewhere to sit even in the deepest German forest.”

Dick went on to work in a specialist area of the army alongside scientists and engineers. “This sparked my love of technology,” he says. “You have to remember also that Britain has world-leading scientists who have come up with some of the best technological inventions. We can solve any problems. If you have got a problem then fix it!”

Dick was eventually awarded the MBE for his work. But, as with his doctorate, he tends not to use the MBE initials. “It made me what I am, but I don’t live on past glories. It is not who I am now. It was a privilege to get an MBE, but the MBE does not define me. I am who I am.”

What does define him is that ‘fix it, don’t moan about it’ attitude and his ‘use whatever is lying around to make life easier’ approach. “If I don’t like something I change it. Why live with something you don’t like?”

With a view to improving the motorhomers’ lot, Dick draws on his past engineering and sailing experiences. “There is a lot of technology on boats that should be transferred into motorhomes,” he says. “I’m talking about engine cooking, energy capture, fuel cells, hydrogen cells, wind power. I have lived in very small confined places so I understand the need for efficient, compact technology.”

Dick’s ‘fix it’ approach eventually led him from the army to the TV when he led the winning team on what was to become Scrapheap Challenge. From there burgeoned a TV career that continues to gather pace. Interestingly for such a technologically and mechanically obsessed man, Dick is also an eco champion.

The very successful It’s Not Easy Being Green series highlighted that his approach worked. And that approach is you do not need to be a tree-hugging, engine-shunning eco warrior to be green. “What we can do is reduce our impact. But we still live in the 21st century. I don’t believe in the sackcloth and ashes approach. It needs to be balanced. You can do eco and 21st century living.”

And many people of his generation have already been to green school. “I was brought up growing my own veg, I was also bought up to be frugal. I wore hand-me-downs, built green houses and kept chickens and goats. It is a way of life that many people have already experienced.”

Now, in between filming around England’s stunning south coast for his latest series, Dick has agreed to write a series for MMM.

In coming issues he will design a motorhome of the future, offer advice on how to be a greener motorhomer, design a useful bit of kit for your ‘van from scrap and cook a three course gourmet meal in a campervan galley of the smallest dimensions.

He is also willing to take up a reader challenge, so get your thinking caps on and come up with a challenge that will get this ex-army eco fix-it man scratching his head.

But make it fun. “I don’t do miserable, it is not an option,” he says. “I am a grandfather now. I don’t have to behave anymore.”

This feature was originally published in the November 2011 issue of MMM. Click here to download the pdf as it appeared in MMM.