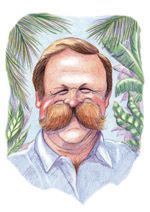 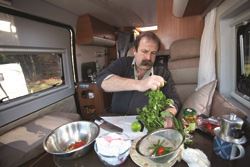 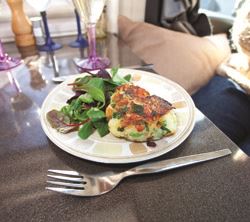 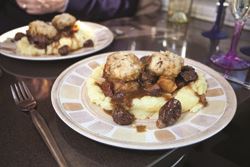 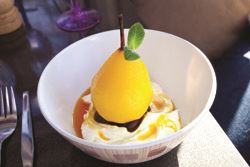 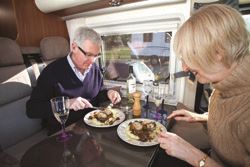 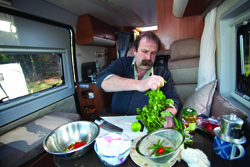 I like my grub and I see no reason to not to eat well wherever I go. So, when I was challenged to cook a superb three-course meal for two in a motorhome, I was very happy that I could produce something rather special.

My experience of motorhomes led me to picture a relatively spacious kitchen area with at least two burners, a grill, maybe even an oven.


Of course that would have been a little easy so, as I was packing my knives and planning what to do, I was informed I was to be using an Adria Twin van conversion, which comes with only the two hobs. (ED: to make it even more of a challenge, we cut the number of available hobs to just one on the day.)

So it was back to the drawing board. But, not to be thwarted, I did a bit of research on the internet and tracked down a very low power slow cooker that would increase my cooking capacity – I don’t think it was cheating.

Slow cookers were quite popular in the 1980s, but they seem to have dropped out of fashion. The one I tracked down was small, only 1.5 litres (plenty big enough for two!) and only 80 watts.

The power is important to us techies as it will only draw 6.5 amps from a 12V inverter. That means if you cook for eight hours, which is plenty for any stew, casserole or soup, it will require 52 amp hours, which is about half the charge in the average 110 amp hr leisure battery. So, if you are not connected to mains, you can cook a complete dish and still have lots of juice to spare. Hopefully this justifies my decision, and it did open lots of possible dishes while still freeing up the cooker.

With my slow cooker in my box of goodies, I headed off to a rather chilly Abbey Wood Caravan Club Site in South East London. I revved up the slow cooker first thing in the morning and had my dish bubbling away. There was a reasonable frost on the ground as I started to prepare the rest of the meal.

I’d left myself a couple of hours before my guests were due to arrive. Rachel Stothert (MMM deputy editor) had a walk around the site and found two willing volunteers to sample the delights I was preparing. She returned with MMM readers and fellow campers, Nigel and Margaret Robinson and, having ascertained they had no allergies or intolerances, it was all systems go.

Pears Poached in Saffron with Mint Ganache and
Ginger Syllabub

NOW FOR THE REAL CHALLENGE

Sadly, all systems weren’t go - only one hob worked (the other wouldn’t stay alight) and the water pump was not functioning - who said motorhoming was easy? So the challenge suddenly got more serious.

Unperturbed, I got out my notebook and determined the order for cooking. I started by peeling and poaching the pears in sweet wine with a little saffron and added sugar. Half-an-hour later, the pears were cooked and after 10 minutes of rapid boiling, the liquor was nice and syrupy.

Next it was time to sort the ganache, I quickly heated some unsalted butter and a bar of Green & Black’s mint and dark chocolate and when it was heated I stirred in some cream and set it aside, so three quarters of an hour in and the pudding was all but ready.

The basis of the fishcakes was crushed potatoes, which I peeled while the pears were poaching, they took up residence on my hob as soon as it became free and, when cooked, some were pushed through a sieve and put aside for the mash and the rest were allowed to cool in preparation for making the fish cakes.

I don’t actually use a recipe for any of my cooking so getting together the ingredients for my ‘fusion’ fishcake was a matter of filling a mixing bowl with ingredients I felt should go into tasty fishcakes: coarsely chopped, responsibly sourced, lightly smoked salmon fillet (a real mouthful but really great); the crushed potatoes (lumps crisp up well so not mashed, just bashed); sliced spring onions; roughly chopped olives; finely sliced chilli; roughly chopped coriander; chopped capers and, of course, a bit of beaten egg and a little flour to make it all stick together. I just formed the mix into balls and left it in the fridge, ready to cook when my guests had arrived and had been given a glass of wine.

Apart from quickly mixing some suet dumplings with chopped rosemary, which I popped into the slow cooker for 25 minutes before serving, I was done, I even had time to tidy up a little before lunch.

Having settled Nigel and Sue, it was time for final cooking and serving. We eat with all our senses, so presentation is important, that said, I had to resign myself to the available melamine crockery (why is it so awful?).

I put on a frying pan and popped the fish balls into hot olive oil; carefully squashing them into a fish cake shape. A handful of pretty salad and a little garlic and lime mixed into some mayonnaise and it was done. The flavours are not specifically British, Mediterranean or Eastern but they all work together...

My main course was flash fried chunks of shin and onions, carrot, parsnip, sweet chestnuts, a little rosemary, garlic, flour and a bottle of red wine, all cooked for eight hours in the slow cooker. The meat melts in the mouth and the sauce is lovely and rich.

Cooking in a slow cooker, on a range or wood burner, or in a slow oven, has the added advantage of smelling great all day, so when it comes time to eat you tend to be ravenous. On a cold winter’s day its real comfort food and apart from peeling and chopping, it only takes a couple of minutes in a frying pan then straight into the dish to cook – with a bit of practice it probably takes less than 10 minutes.

Pudding was a matter of whipping up some syllabub (whipped cream and alcohol stirred in) and making it look pretty...

And, judging by the two contented judges sat before me, I had met my challenge and proved that a very, very tempting three-course meal can be cooked in any motorhome – even one with just a single hob and no water.

WHAT THE TASTERS SAID 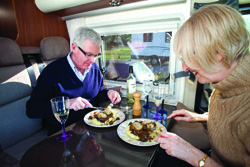 Our guinea pigs were Nigel and Margaret Robinson, who have been motorhoming for three years. Nigel’s normally the cook and makes meals at home, which they then take with them in their motorhome.

As soon as the masterpiece lunch was served, the only sounds audible were “mmms”. When the meal had been devoured, the couple said Dick had met the challenge with flying colours: “The starter was really nice, the heat was just right, the main was lovely and the poached pears were very soft,” Margaret said. Nigel added: “I liked the spice in the fishcakes, the slight taste of rosemary in the dumplings was great and the dessert was fantastic.”