At £15,894 including delivery, the new six-berth Xplore must be regarded as outstanding value, even when you add on £420 for the SE pack which every Xplore has! The pack includes the hitch-head stabiliser, spare wheel and AL-KO Secure wheel lock receptor. 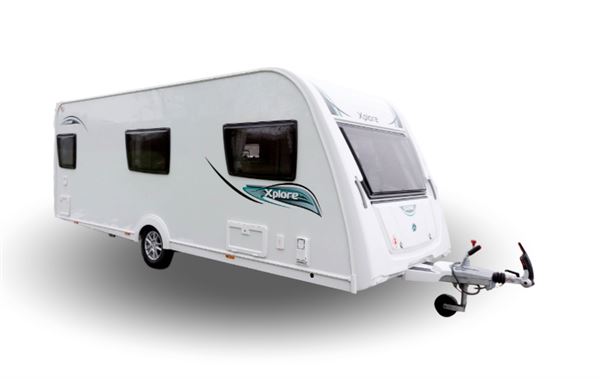 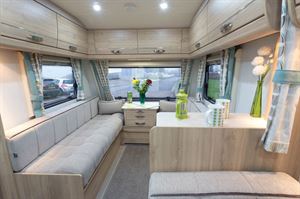 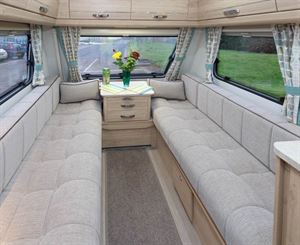 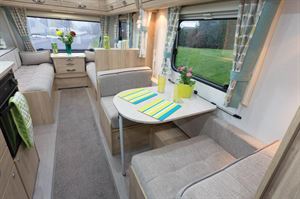 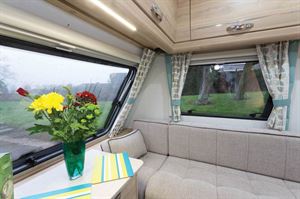 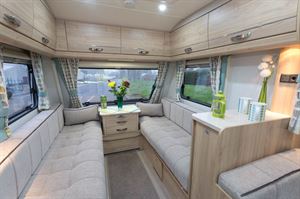 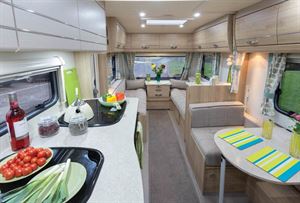 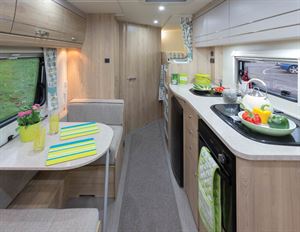 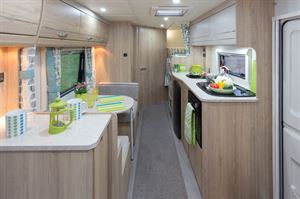 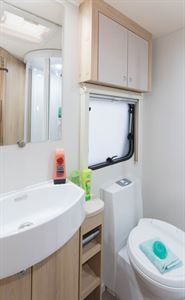 Our stylish Lightweight Caravan of the Year award winner is super-versatile, with beds for six, a spacious dinette and a long kitchen with good storage capacity

Our stylish Lightweight Caravan of the Year award winner is super-versatile, with beds for six, a spacious dinette and a long kitchen with good storage capacity

Providing accommodation for six, in a caravan that's only 5.7m long, is a test of any manufacturer's ingenuity. New for 2016, this layout achieves not just beds for up to six. It does so in three well-defined, and reasonably well separated areas.

It's light and, at 1350kg, it's the lightest caravan in its six-berth class, which surely helped it to win Caravan magazine's Lightweight Caravan of the Year award for 2016.

When we agreed upon the shortlist for this award, we scrutinised caravans with MTPLM figures under 1500 kg, and the latest addition to the Xplore range is a long way under 1500kg. This award, though, isn't simply about figures. It's about how well a caravan performs for the market for which it's designed.

When our four judges explored the fine detail of the 586 they gave it high marks in all scoring sectors, including its stunning styling. The combination of turquoise and bright green in curtains and cushions sends thoughts instantly into the realms of sunny holidays, and the pale woodwork makes this relatively compact caravan look actually rather spacious.

There's much more to this new Xplore model than the visual qualities that will grab your attention the moment you step inside. The stuff you can't see is rather more important. Xplore caravans, in common with all Explorer Group tourers, are made using the SoLiD fully bonded construction system.

Explorer developed the system with Henkel, the structural bonding specialists; the same construction system is used on Formula 1 racing cars, super-yachts and to bond aircraft wings.

There's another construction feature hidden from view, too. The floor is protected from road moisture by a GRP under skin.

The Xplore's heating and hot water system isn't obvious, either. It's the Whale system, hidden away under the offside settee. It's very efficient. At the start of our chilly winter test (with temperatures hovering around 3ºC), powered by electricity, the 586 reached a comfortable, coats-off temperature in less than 15 minutes, and five minutes later we pronounced it toasty. We could have switched on the system's gas mode simultaneously, and the caravan would have warmed up even quicker.

It has arguably the simplest control panel of any heating system, with on-off buttons for water and space heating, and a line of red dots to indicate temperature selected.

While most caravans have shower rooms either across the whole width at the rear, or centrally on the offside, there are some caravans that fall into neither of those camps.

The Xplore 586 is one of them, with a shower room that occupies a large chunk of the offside corner, bordered by the bunk beds and the wardrobe. It's vaguely triangular, with more floor space than you might imagine. There's as much space to move around in here as in some full-width rear shower rooms.

The shower is in the right-hand sector, almost in the centre of the caravan, with the toilet and washbasin on the offside.

The two cabinets are, together, big enough to hide away most of the showering necessities, while the Whale water heater is designed to warm up rapidly, to keep pace with family shower requirements. It has an eight-litre capacity.

Like the space heating system, you can power it on either gas or electricity, or both. In that mode, it will warm the water to 70ºC in just 12 minutes, useful if you need near-consecutive showers. On electricity, it will take 20 minutes to fully warm up, fine unless everyone wants their showers at once.

There's one downside to the 586's showering arrangements, though. There is only one towel loop. So, towels would be draped over doors to dry. The answer is to ask your retailer to fit more towel oops or bars in the shower room.

The 586s capability as a caravan for up to six, centres around two areas. One is the fixed bunks, cosily tucked away in the nearside corner, with a ladder fixed to the framework and a feeling, when you crawl into bed, of seclusion. The pillow ends get much privacy from the wall of the shower room alongside.

The other key zone is the offside dining area, which creates two more bunks. Its lower mattress is made up of the seating upholstery using the whole depth, rather than folded out to half-depth, so adult-sized caravanners will find comfort here. The mattress for the top bunk is much thinner (fine for little caravanners) and it's roll able, so you can store it under a seat.

A curtain tracks around this area and completely disappears into the wardrobe; a neat arrangement! The lounge has settees long enough to make single beds, as an alternative to a double; it's nice to have that flexibility.

Flexibility is found in the realm of storage, too. Under the lower bunk is a useful space, which you can make even more useful (depending on what you need), by taking off the mattress, placing it on top of the higher bunk, and raising the base. A webbing strap fixes it against the wall by means of a press-stud.

The wardrobe has two good-sized shelf areas beneath it; the ideal space for shoes.

There's flexibility in the dining arrangements, too. You could do quick breakfasts and snacks in two-by-two relays at the side dining area. Or you can all sit together, three on each side, with the main table in the lounge.

The efficacy of lounging arrangements, family-holiday style, is more about facilitating activities than just sitting in front of a TV. So location of power points is important, for charging different media equipment.

That's where your TV would go; it could face the lounge or the rear of the caravan, even watchable from the bunks.

The kitchen is 1.52m long, with good space between, and alongside, the sink and hob.

Cooking facilities are three burners and a combined oven-grill. There's no microwave, although you can have one fitted for an extra £179.

Three drawers and a cabinet, all 37cm wide, are between the fridge and the oven-grill, with a 46cm-wide cupboard under the oven-grill itself. When you also factor in the trio of top cabinets, the 586's kitchen storage arrangements are workable, even with six appetites to cater for.

There's a little more space to consider, too, in the cabinet that forms a room divider between the lounge and dining seating areas. The cabinet is 90cm deep and almost 30cm wide, with the table occupying a little of that width. A couple of pull-out, metal basket-type shelves in here alongside the table would have created good additional kitchen storage.

If we bought an Xplore 586, we'd go for the option of ATC electronic stability control. It adds £420 to the price of the caravan, but its value in terms of extra safety margin is immense. It gives you peace of mind, knowing that there is something electronic detecting any sign of sway, if you're overtaken by a lorry, for example.

The 586 is light enough to be mated to vehicles a lot lighter than our Rexton.

Unsurprisingly, it towed smoothly and superbly, and at the end of the test, the low weight earned more praise when we found it's easy for two people to manhandle.

Options To Go For...

At £15,894 including delivery, the new six-berth Xplore must be regarded as outstanding value, even when you add on £420 for the SE pack which every Xplore has!

The 586 is exceptionally lightweight for its six-berth capability, which puts it ahead of competitors in its class. As we said earlier, the high-points of this caravan can't simply be quantified with figures. This model's layout excels in terms of family convenience.