Since the Xplore range first appeared nine years ago, the evolution of this essentially budget, lightweight brand has been interesting, each year taking Xplores a step up in terms of spec and style. For a couple of years now their look has most definitely belied their budget price tags; now, for 2017, that’s even more strongly underlined. 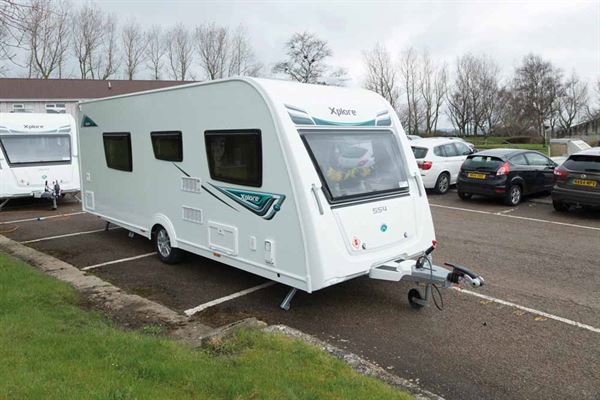 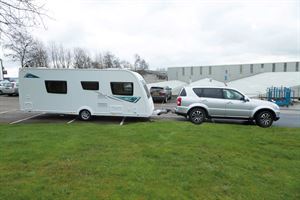 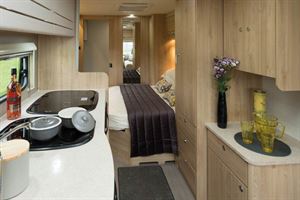 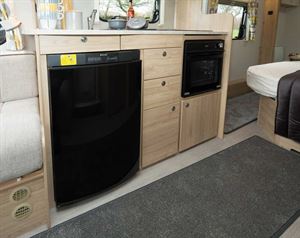 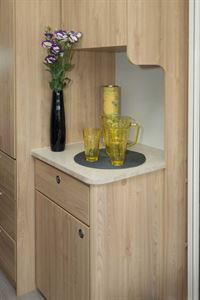 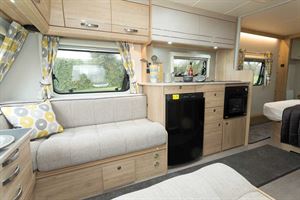 The new Xplore 554 model for 2017 brings a transverse island bed layout into the super-lightweight, budget Xplore range for the first time.

The Xplore range grows its appeal or 2017 with the introduction of a new model. The 554 brings to the Explorer Group’s budget, lightweight range a layout that has already proved its popularity in ranges higher up this manufacturer’s price and spec ladder. Indeed, this layout has in the last couple of years become one of the best-selling configurations for all caravan makers. Now, buyers can get an Xplore transverse island bed caravan that weighs a mere 1335kg.

The five-model Xplore range gets some style tweaks for the new model year. There are bolder graphics, but still using the sunny-hue bright turquoise that has come to identify the Xplore range since its introduction in 2008.

And the interior gets new hues, with yellow, pale grey and charcoal in a bold roundel pattern on the cushions and the curtains, and calm, plain seating fabric units. These furnishings look and feel anything but budget; a nice touch of refinement that contributes to the elegant, quality look is charcoal grey piping around the edges of all the seating units, armrests, cushions and on the lower edges of the curtain tie backs.

The fabric scheme is a feature of all models in the range, of course, but the 554 gets an extra décor element that really adds a touch of luxury. The curtains in the bedroom hang on a chrome café-rod-style pole, the same style as that found in transverse-bed models higher up the Explorer Group’s portfolio.

Luxury arrives in this model in a practical form, too; the shower room occupies the whole width, creating a true bedroom-and-ensuite arrangement.

While this is by no means the biggest washroom in caravans, at 71cm at its deepest point, it is more than adequate in size, and with two good-sized cabinets (one on the wall above the toilet, the other beneath the washbasin) to hide away all your showering paraphernalia. A new style point in the little room for 2017 is a high-arching tap, over a cabinet-top, fruit bowl-style basin.

There’s just one towel loop, it’s ideally located, beside the shower and also close to the basin. But if a 554 were coming home with us we’d be asking our retailer to fit a second one, on the basis that towel loops or hooks need to equal the number of occupants; most buyers of transverse island bed caravans are couples.

Xplores come with strip, rug-style carpets; they’re nice looking, they have a quality feel and they’re a practical grey. But the two strips in the 554 don’t extend into the washroom, so cold feet might draw adverse comment. There’s an easy cure though, if we were buying an Xplore we’d also buy a bathroom rug.

Night-time comfort is guaranteed, we think; Xplore fixed beds have mattresses made using the Ozio layered fibre technology which feels both firm enough and yielding enough to be comfortable. The triple layer construction is designed to retain heat during cold weather and keep the occupants cool in warm weather, by dispelling moisture.

The 554’s bed has a base which retracts to increase corridor space.

When you push the base back for daytime mode, the bed length shortens by about 30cm, creating a corridor that gives you 53cm of floor-level width.

If you need to accommodate another pair of caravanners on occasions, a slatted base can be drawn out from under the lounge drawers to make up a double bed.

The 554’s biggest storage asset is of course its bed. There’s a space that’s 1.38m deep and 1.33m across (excluding a slight tapering at the corner sections. And even though this bed has a retracting mechanism, it imposes very little on the access to the storage area, because the T-shaped metal retracting mechanism is quite close to the foot of the bed. And there’s more. An exterior hatch gives you easy method of putting in items from the outside; at 78cm wide it’s nicely proportioned to enable you to put in most of the folding chairs on the market.

You can also get an exterior hatch to a forward locker; it’s an optional extra which will add £66 to your bill and also gets you an exterior mains socket in with the package.

Xplores don’t have front skylights, which is a benefit to storage capacity; there are four well-proportioned lockers around the lounge plus two more over the bed.

Wardrobes are on both sides of the bed. One is 22cm wide, with three drawers of the same width beneath it; the other is 50cm wide, with a drop-down-door cupboard and two drawers underneath. And there’s a surprise here, given that this is a budget-level caravan. The wardrobe door has a soft-close mechanism; another feature, along with the café rod, that belies this caravan’s budget status.

The dining table is easily removed and replaced into its clips on the wall of the larger wardrobe. For lesser meal space requirements, the front-centre extending table top is more than sufficient. It’s a level surface of 81cm deep and 61cm wide.

Exceptionally bright LED clusters are set flush into the ceiling all over the 554; there are five over the lounge, giving a lovely white light. A white LED strip, again set set flush, this time into the woodwork under the front head-height lockers, adds extra illumination over the pull-out table. And there’s plenty of daylight, because Xplores have full-width single piece front windows. Xplore lounges are really pleasant environments.

The bright yellows and cool greys that distinguish the 2017 model-year Xplores work well, the colours are nicely accentuated by the exceptionally pale woodwork.

And the kitchen’s even paler top cabinet doors play their part in the whole pastel-plus-vibrant décor scheme.

Xplores have three-burner hobs, with the largest burner big enough to be used for a wok. The oven and grill are combined in one unit, which means there’s a large cabinet beneath; it’s 42cm deep and 46cm wide. In the centre of the kitchen, between the oven-grill and the fridge, there’s a 32cm wide cabinet and two drawers.

And opposite, in the dresser, there’s another, wider drawer, plus a two-shelf cabinet that’s 47cm wide and 49cm deep. Add in the 52cm wide, 66cm-deep cabinet above, and this kitchen can safely be regarded as exceptionally capacious in this size-class of caravan. The kitchen surface is 1.48m long, of which there’s 50cm of surface uninterrupted by sink and hob. That’s enough to make this an easy kitchen in which to work.

By the time we came to analyse the kitchen we’d spent the best part of a day in the 554, and its ambience as well as its practicality had gradually grown on us. The efficiency of the Whale 4kw central heating system is impressive; very quick to warm up and quite quiet to rut. There’s an even quieter night time setting, too.

Interestingly, you can opt for an extra piece of kitchen kit; an extractor fan, for an extra £182; something to consider if you plan on doing a lot of cooking in cold weather when open windows aren’t an attractive proposition.

Our tow test was brief; enough, though, to establish that the lightweight 554 is a nimble, responsive tourer on tow. There’s a hitch-head stabiliser as part of the package, although that’s a component of the Xplore SE Pack which adds £440 to the price and also gives you a hitch-head stabiliser, alloy wheels, a spare wheel and carrier for it. A radio-CD player and MP3 connectivity and an AL-KO Secure wheel lock receptor.

Also consider the new Sprite Major 4 SB, which has a similar layout

What’s really interesting is that the Xplore 554 caravans are priced to compete with the used market. Yes, you can get a cracking used caravan for the same money, but by going for a new Xplore you are getting a 10-year water ingress and body integrity warranty, so financially it stacks up. And in terms of ambience and general appeal? The 2017 Xplores are cracking caravans through and through.