What a splendid little newcomer! We love the clever design of its kitchen and its shower room. We love the space-saving position of the wardrobe above the fridge. We love the full-width front window. And the amount of storage space. It’s great value, too. 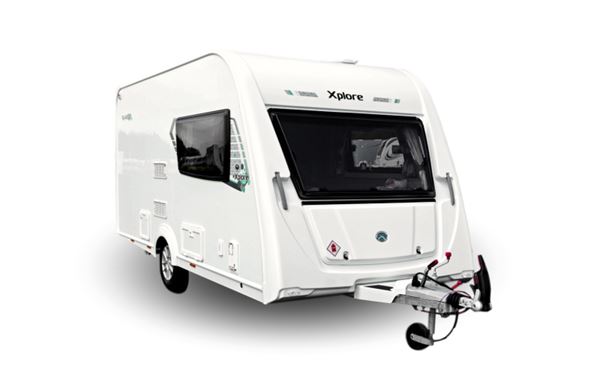 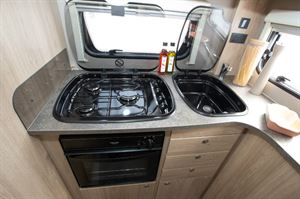 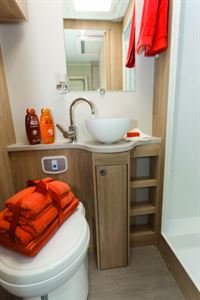 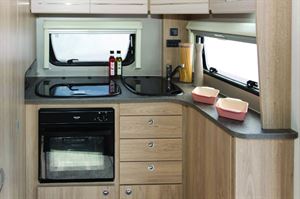 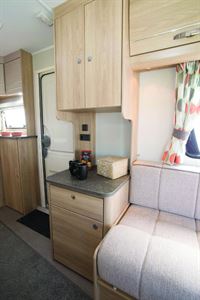 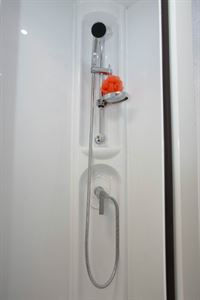 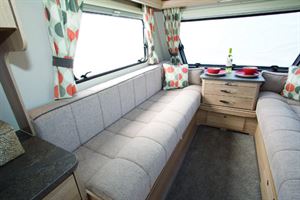 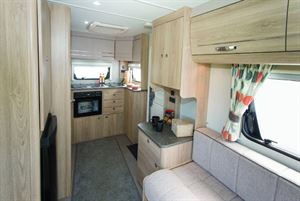 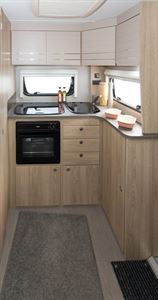 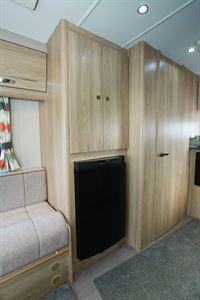 The new Xplore 422 redefines end kitchen, two-berth caravanning with its separate shower within the offside compartment

The new Xplore 422 redefines end kitchen, two-berth caravanning with its separate shower within the offside compartment

Two-berth caravans have declined in number over the last few years. Twin and double bed options in the lightweight sector swept them aside.

One style of two-berth, in particular, has fallen out of fashion. That’s the end-kitchen layout because almost all had a combined shower-toilet compartment. And modern fashion is all about separate, step-in showers. They avoid the task of wiping dry the shower tray after each use.

Now, though, five new two-berth, end kitchen models are here for 2018. They are in the Xplore, Elddis and Compass ranges. These layouts have both end kitchens and step-in showers. The shower rooms feel almost as spacious as those found spanning the whole width of caravans at the rear.

This new breed of couple’s caravan from one manufacturer has some other key attributes, too. The kitchens in all three models are L-shaped, with windows both at the rear and sides. This makes them light and bright.

There’s a proper dresser, alongside the door. Whereas classic end-kitchen two-berths had the fridge here. In this new layout the fridge is on the offside, with a half-length wardrobe above it.

The choice of five models of this layout are in the Compass Casita and Capiro, and the Elddis Avanté and Affinity ranges. In the latter, they are the 462, and this one, the Xplore 422. This is the lightest and most affordable of them all. The Compass and Elddis options rise in spec, price and weight. They give buyers some different fabric looks.

The Xplore, though, has all our attention this month. And the first thing to notice is 2018 Xplores stick to the bright turquoise decals. The decals have identified this sporty, lightweight model since its introduction in 2007. We love this colour, because it’s evocative of blue skies and blue seas, the images of holidays we all desire.

And inside? More bright tones to characterise 2018 Xplores, this time, mango orange. It’s mixed with soft greys and white in a roundel pattern that makes sure you’ll notice.  And remember: the cushions and curtains when you take a look at an Xplore.

But it’s the shower room configuration that is the most important feature of the 422.

The total length of the shower room is almost 1.6m. The shower, at the rear, is a well proportioned 64cm x 80cm. It leaves a 90cm length of floor space for the toilet and basin sector.

The cabinetry, in which the toilet and basin sit, is an ingenious design. The flush button is on top of the cabinet. The neat, circular basin (26cm in diameter, 13cm deep) sits up on top of a curved section of surface. Its design is perfect for its dimensions, with a small, two-shelf cabinet beneath. A cabinet on the forward wall spans almost the 80cm depth of the shower room. This gives you two good-sized shelf areas.

Two open shelves are to the right of the basin. The shower cubicle has a soap dish attached to the riser bar. Plus it has a small amount of space alongside the temperature/flow control. So, plenty of places to stow stuff away and put stuff when it’s in use. A splendid shower room in its small-caravan context, we’d say.

It's easy to make up the double bed using webbing-linked slats that slide out from under the front chest of drawers. You turn the knee rolls to the outer edges before using the backrests to complete the mattress.

The upholstery is a layered fibre construction, called Ozio. It’s both comfortable and light to handle. It is 'chalk and cheese' from the sprung seating in almost all British-made caravans, until lighter alternatives arrived.

In a caravan with a body length of a diminutive 4.2m you might expect storage to be an organisational challenge. The 422, though, is capacious, and that’s down to the position of the wardrobe and fridge.

Taking the fridge away from the classic position alongside the door means the designers have been able to create a dresser unit in its place.  It has a 44cm-wide, lower two-shelf cabinet. And a drawer, plus an upper cabinet that’s 53dcm wide, also with two shelves.

You can regard all this space as available for anything. The kitchen is so capacious (as we’ve detailed later) that you won’t need to stow culinary equipment in this unit.

There’s a cavern of storage space under the nearside settee. And almost as much under the offside seating. The only interruptions are the usual electrical installations. These include 8.5-litre Whale water heater. And the ducting leading from the Whale Expanse space heater mounted under the caravan floor, which saves space.

Much as we love the current fashion for roof lights above front windows, sometimes it’s great to see storage takes precedence. As it does here, with 25cm-deep top lockers above the front window, making the total top locker count six. The total storage capability of the 422 earns its place in our A category, given the small size of the caravan.

You have a choice when you don’t need to get the table out from its clips on the aft wardrobe wall. There is an 81cm-long, 61cm-wide dining option when you extend the top of the chest of drawers. And when you do want more dining space, you’ll find the table light and easy to lift out and replace.

We’ve talked about delightful mango colours and the long, comfortable settees. But there is one element of Xplore 422 lounging different from all but a handful of other caravans. That’s the single-piece window.

These panoramic windows distinguished budget-status caravans from costlier and heavier models. For their lower-cost options, some makers have recently moved away from this style. They moved towards the more-common three-piece window configuration. But we’re pleased to see Xplore retains this.

That’s because they let in so much light, bringing the ‘great outdoors’ in. So, 422 lounges are light and bright places in which to relax, feet-up with your TV on the dresser. Connections are close by. Again, this little gem of a caravan earns an 'A', for a lovely lounge.

The L-shape of the kitchen creates an awesome amount of storage space in the three cabinets and drawers. That’s much more than in many a family caravan.

The oven and grill are a combined unit, which means there’s space beneath it for a 46cm-wide, 42cm-deep cupboard beneath it. That’s enough for more pans and oven dishes than many of us have at home.

Then you have a second cupboard almost as wide and as deep, alongside it, under the drawers. The L-shape creates an extra cabinet, 94 cm deep, under the surface that runs to the right of the sink and three-burner hob.

And then you have four top lockers. Finding items to fill this kitchen would be the challenge, rather than finding places to put stuff! A splendid kitchen in such a compact caravan!

The joy of this caravan is its extreme light weight, meaning that car choice is vast. And its short length means that storing it in a garden would be easy. If we were buying one, we’d go for the ATC option, for the on-tow peace of mind.

What a splendid little newcomer! We love the clever design of its kitchen and its shower room. We love the space-saving position of the wardrobe above the fridge. We love the full-width front window. And the amount of storage space. And the mango accent colour. And the pale woodwork which makes the 422 to look and feel much more spacious than its length and width would suggest.

It’s great value, too. Even when you factor in the SE Pack. The SE Pack gives you items including the hitch-head stabiliser, steel spare wheel, alloy wheels and wheel lock receptor. It adds £469 to the price.