This is a caravan to get caravanning noticed. It’s cool, it’s retro, it’s high on quality and destined to appeal to potential caravanners who might not consider a ‘conventional’ model. For those reasons the Ocean Drive and its cousin, the red Rockabilly, have an important role to play in our market and our industry, in persuading young buyers that caravanning is cool. 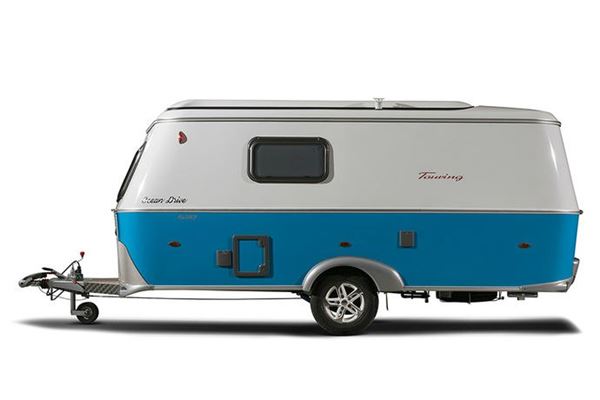 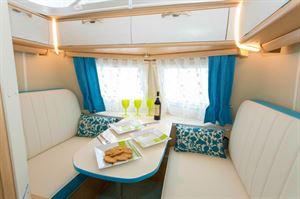 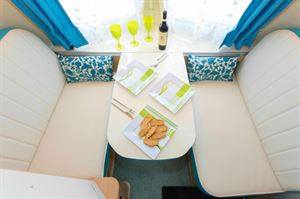 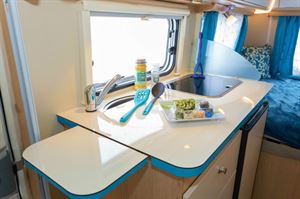 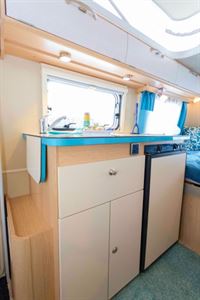 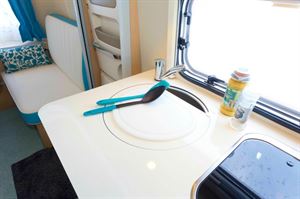 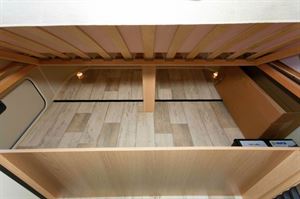 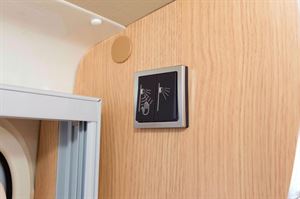 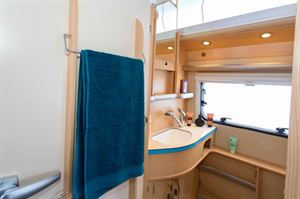 A caravan with a bright ocean blue colour and a cult follow has arrived on British shores. The Eriba Ocean Drive shouts out the message that caravanning is cool!

A caravan with a bright ocean blue colour and a cult follow has arrived on British shores. The Eriba Ocean Drive shouts out the message that caravanning is cool!

Eriba caravans have long enjoyed a cult following. Iconic and largely unchanged for decades, they're the VW campervans of the caravan world.

Now, two new models have reached Britain from the German caravan maker. These are Eriba caravans like nothing before them. They're special versions of the long-established Touring Troll model, each with a distinctive theme.

The first to arrive, unveiled at the February NEC show, was the Rockabilly, coloured red and cream inside and out and guaranteed to turn heads wherever it goes. Eriba says it's a 'rolling ode to the way of life and beat of the 1950s, transforming every trip into a small journey back in time'.

The second to arrive is the Ocean Drive, named after the famous ocean-front film set street of Art-Deco architecture in Miami and perhaps also the album by the Lighthouse Family from the late 1990s.

The caravan's ocean-edge theme isn't just created by the stunningly cool half-blue body but by octopuses, seahorses, starfish, puffafish and turtles in bright turquoise on the cushions.

It's not just the colour that grabs your attention the moment you step inside. Quality is obvious. Positive catches on top lockers that close with a resounding 'clunk', rounded edges on everything, fine voile curtains.

There's a shoe cupboard by the door. And a pop-up roof mechanism that rises and falls easily with four reassuringly firm catches. This brings the headroom from 1.72m to 1.95m. The roof is made of GRP; the sides are aluminium.

The Ocean Drive and the Rockabilly are special editions of the Eriba Touring Troll 530, with a long list of extra kit including a 30-litre water tank, a carpet (long pile, in pale turquoise), a spare wheel and an insect-net screen inside the door.

The heating system is gas-only, a simple Truma heater set under the wardrobe. A mains-powered five-litre water heater is an option.

The layout provides a double bed aligned across the caravan at the rear, a dining area at the front, the kitchen on the offside and a combined toilet-shower room opposite.

Made by the giant Hymer Group, of which Elddis, Compass, Buccaneer and Xplore are now part, these caravans will be available at several retailers including Adventure Leisure Vehicles in Cumbria, Lowdham Leisure World at Nottingham and Huddersfield and Automotive Leisure at Bournemouth.

The caravan is only 4.71m in body length so you wouldn't expect the luxury of space. But all you need is in the little room. A small hand basin. A bench loo. A mirror. Five shelves and a tiny cabinet. Two sizeable towel rails on the door.

The shower rose is also the tap – it extends on a hose. It's all neat. Giving the Eriba ratings for each layout function isn't easy, because it's hard to compare it with other caravans.

Given it's a shared shower-toilet room, though, forces us to give it a C rating even though it's good in its own sphere.

It's a three-berth; the dining area makes a one-metre-wide, 1.95m long single bed. The table forms the centre section of the base. It rests on a ledge at the front of the caravan and its leg folds to half its length to create a support.

The mattress is composed of the seat bases plus two upholstered sections to insert; during the day these can live under the double bed.

That, of course, is the luxury element of the 530; a big, comfortable bed to crawl into at the end of the day with no bed-making to do. It's 1.95m long and 1.36m wide and comes with a quality-fabric cover with elasticated strips across all four corners; the idea is these slide under the mattress.

You'd have to remove your duvet to fit the cover, though – but it does look neat and tidy – and, of course, there is ample space under the bed to hide your duvet.

The under-bed space is, of course, the 530's greatest storage asset. But getting to the space isn't straightforward. The slatted base is constructed in two sections, with the half nearest to the centre of the caravan raising.

Its two metal hinges support it when it's raised. That's easy. Then we contemplated how to extract stuff stored under the section of the bed nearest to the rear of the caravan, which doesn't have top access.

Even if you don't put things in this area, you can be pretty sure some stuff will slide there on tow. Answer? Get inside the raised section and reach… And we did!

There's a large (77cm wide, 32cm deep) exterior aperture, so sliding in a folding table and some chairs would be no problem.

Top lockers run all the way around the 530. There are 11, all 18cm deep and varying in width from 47cm to 68cm. The wardrobe provides 44 cm of hanging width and four shelves, 27cm wide, are alongside. There's space under the seating, too, though the solid wooden tops are not self supporting.

So, first-rate storage in terms of amount, considering the size of the caravan, but with some access drawbacks – otherwise it would have easily earned our A rating.

Dining, Eriba-style, gives you two choices. You can dine inside – or outside, with the same table. It clips onto a rail just aft of the door. Clever!

The table is an adequate 85cm x 55cm – and then there is the windowsill, level with the table, following the iconic V-shaped front contour which extends 40cm forward.

Many continental-design caravans don't have lounges and the 530 layout is among them. There is, though, plenty of comfort here, with high backrests and four cushions (two bolster-shaped and two square).

If you want to lie down for daytime relaxing, there's always the bed. If you want a television, though, you have to get an aerial fitted. You could also buy a bracket, for the wardrobe wall alongside the bed, or you could put your TV on the large front windowsill.

Cooking equipment is merely a two-burner hob. The fridge is a Dometic model with a small freezer compartment. Cabinet space is excellent considering the size of the caravan; it's 49cm wide and 60cm deep, divided into two shelf spaces.

The drawer above it, also 49cm wide, has five large cutlery segments. Above the kitchen are two of the 68cm-wide lockers. The kitchen surface is 97cm long. A 30cm x 20cm extension is there to augment space when you need it.

The 37cm-diameter sink has a superbly designed cover – turn it over and you have a chopping board!

The V-shaped front line and low line created by its pop-up roof construction is widely accepted to enhance fuel efficiency; we haven't yet towed the Ocean Drive far enough to come up with any figures though.

It's equipped with a hitch-head stabiliser but no ATC stability control system. Its all-up weight of 1399 kg puts it firmly in the lightweight category with suitability for many cars. Behind our one-size-has-to-fit-all-we-tow Rexton, it bobbed along superbly.